[Disclosure: By posting this recipe I am entering a recipe contest sponsored by National Honey Board and am eligible to win prizes associated with the contest. I was not compensated for my time.]

If you add the word ‘rustic’ in front of something it’s okay if it has that whole rugged-good-looks look.

Because I totally get that these cinnamon rolls don’t look like the pretty ones that come in those pillsbury cans.  You know, the cans that claim to easily pop open but never really do?

I also used greek yogurt for icing so at this point you might be thinking, “that’s not icing…it’s yogurt!  What a total coup out.”  And if you are thinking that, I for sure hear you.  When I was grocery shopping I had powdered sugar on my list but when I was checking out I realized I forgot to grab some and venturing back into the jam-packed grocery store on a Sunday afternoon just didn’t seem worth it.

Also, these cinnamon rolls don’t unravel.  I feel like that’s a crime against humanity to call something a cinnamon roll when it doesn’t have layer after layer to slowly unravel.  You can still see the layers even if you can’t peel them open to reveal that doughy center.  I mean, you can still get to that dough center you just have to use a different medium…a fork.

Before these cinnamon rolls I would have judged you for eating a cinnamon roll with a fork but look at me now…I’m a changed, less judgmental person who is encouraging you to dig into this cinnamon roll via an Emily Post-approved means.  You could even put a napkin on your lap if you’re feeling fancy-smansy.

And you can pretty much forget all things Emily Post taught you if you ever tried to eat this sandwich because ohemmgeee.  I hope I’m not wearing white when I make a version of that.

So this recipe is for a recipe contest with The Recipe Redux that is being sponsored by the National Honey Board.  I love me some honey.  Almost as much as my little sister who keeps honey straws stashed in her purse because she loves the stuff so much (we found the straws at a farmers market one time and stockpiled them).

In this recipe, I substituted honey where I normally would have used brown sugar.  It added sweetness without making the rolls too sweet to serve as a breakfast entree.  And paired with the greek yogurt based frosting, I didn’t feel uncomfortably stuffed after eating them like I normally do after uber decadent cinnamon rolls.  Typically, cinnamon rolls seem like an unhealthy choice for breakfast but I totally would eat these again for breakfast tomorrow (and I will).  And then even have them for lunch.

Also, today is Friday which means it’s time for Ashley’s Breakfast Friday.  Be sure to tag any and all of your breakfast creations with #bfastfridayclub!

In a microwave safe bowl, combine water, almond milk and coconut oil and microwave until everything is melted, about 20 seconds.  Allow to cool for ~10 minutes or until luke warm.  Add in yeast and brown sugar, stir for 1 minute until yeast and sugar are completely dissolved.  Allow to sit for 5 minutes until foamy and bubbly.

In a separate larger bowl, combine egg white, honey and foamy yeast mixture.  Add in oat flour and almond flour.  Mix until a sticky dough has formed (should be able to form a ball with it that holds it’s shape…if dough is too sticky/thin add 1-3 Tbsp oat flour).  Grease a separate bowl with coconut oil.  Roll dough into a ball and place it into the greased bowl.  Turn the ball once to coat with oil.   Cover tightly with plastic wrap and store in a warm, draft free place for 1 hour, or dough has doubled in size.

While dough is rising, combine coconut oil, brown sugar, honey and cinnamon in a microwave safe bowl.  Microwave for 10 seconds, or until honey is thinned.  Stir until brown sugar dissolves.  Cover and place in the fridge until dough has risen.

Flour a flat surface with oat flour and dump out the dough.  Allow the dough to rest for a minute while you remove the coconut oil filling from the fridge.  The filling should have hardened on the top and become a jel-like consistency on the bottom.  Using a knife, cut the hardened coconut oil filling into squares.

On your floured surface, roll out your dough into a long rectangle.  Evenly disperse the coconut oil filling squares around the rectangle.  Sprinkle dough with an additional 1/2-1 tsp cinnamon.  Roll up dough from the long-end or the short-end of the rectangle.  I rolled mine up beginning at the long end so I could make 6 smaller rolls.  But you could roll yours up beginning from the short end to make 4 bigger rolls.  Slice of jagged ends.  Cut rolled up dough into 4 or 6 rolls.  Place touching in a parchment paper-lined baking dish.

Now you have 2 options:

1. Cover and refrigerate the rolls overnight and in the morning allow rolls to sit outside of the fridge for 30 minutes before baking at 350F for 30 minutes (this is what I did).

2. Immediately bake the cinnamon rolls at 350F for 30 minutes.

In a bowl, combine greek yogurt and honey.  Use to top warm, healthy cinnamon rolls.  Serve.

(Please note that this is a closed link-up for Recipe ReDux contest entries only. Any links added to this collection for non-ReDux posts will be deleted.) 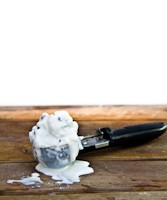 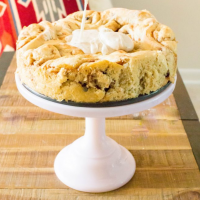 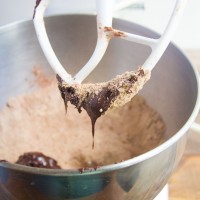