So umm these have butter. 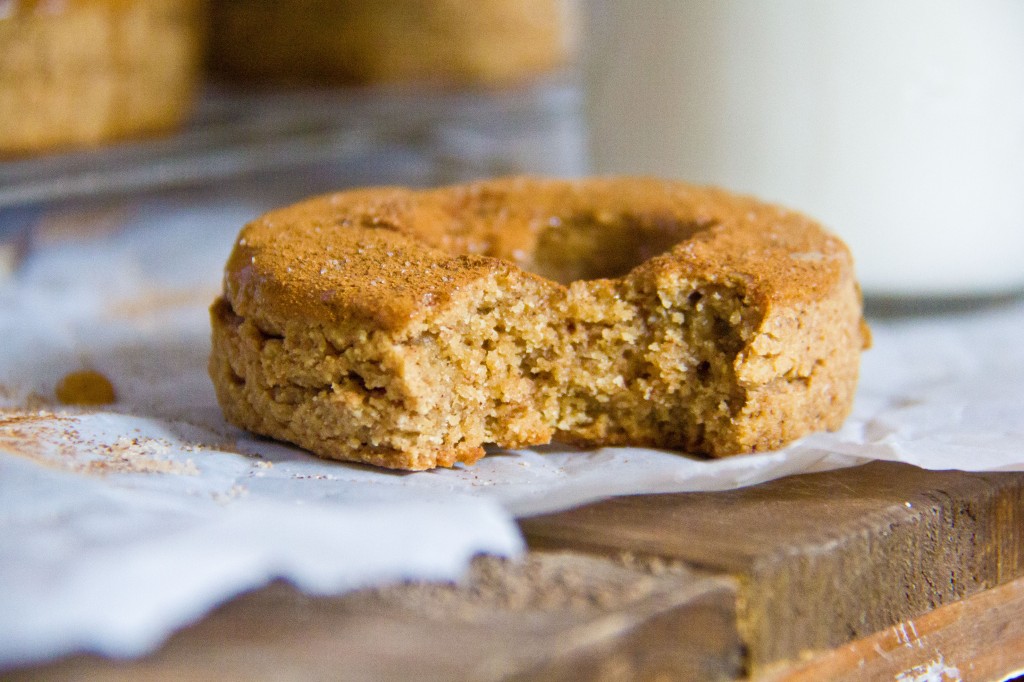 And sugar.  Just thought I should warn you before you got all invested only to read the ingredients and realize these aren’t quite as healthy as things usually are around here.  I’ve been thinking about smooshing together donuts + cinnamon rolls ever since the whole Cronut conundrum began.  So I figured, why not go all out?

Speaking of things around here (here being this blog with the blurry header…working on it), I’ve started to eat dairy again.  Not as in I’m back to drinking milk by the mug-full, but I’m back to eating cheese.  Mainly because I played doctor and self-diagnosed myself with lactose intolerance when that isn’t actually the case.  Yes, if I drink too much milk or eat too much cheese/yogurt/ice cream my body has ways of saying, “you idiot.” But in moderation, I can totally tolerate it.  And calcium is good for me.  That said, you’ll begin to see some recipes that involve cheese.  Gah I love cheese. 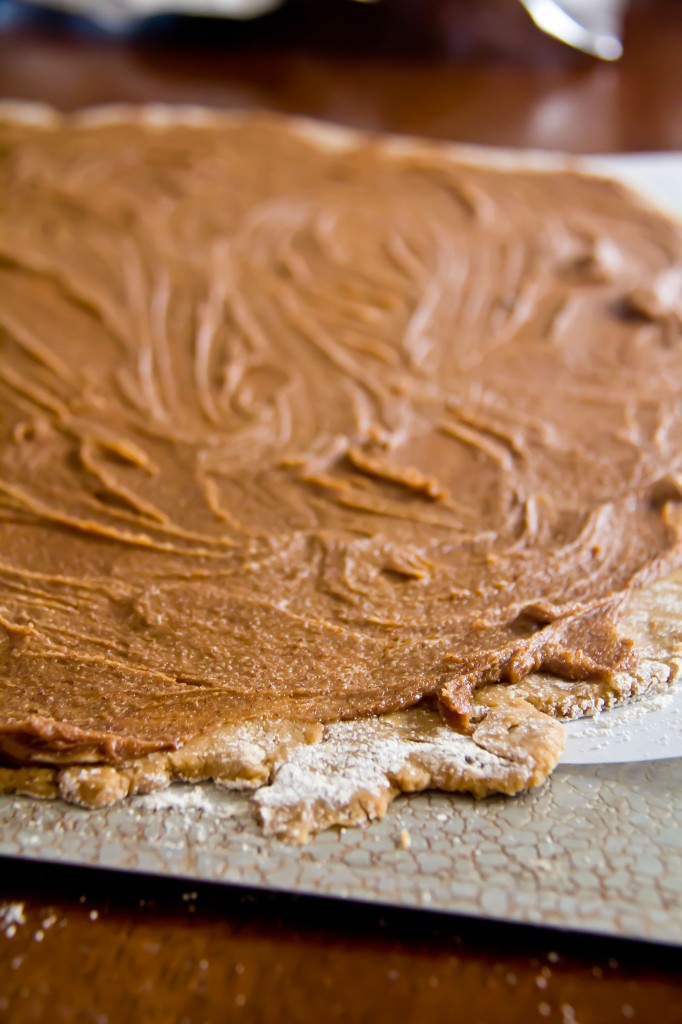 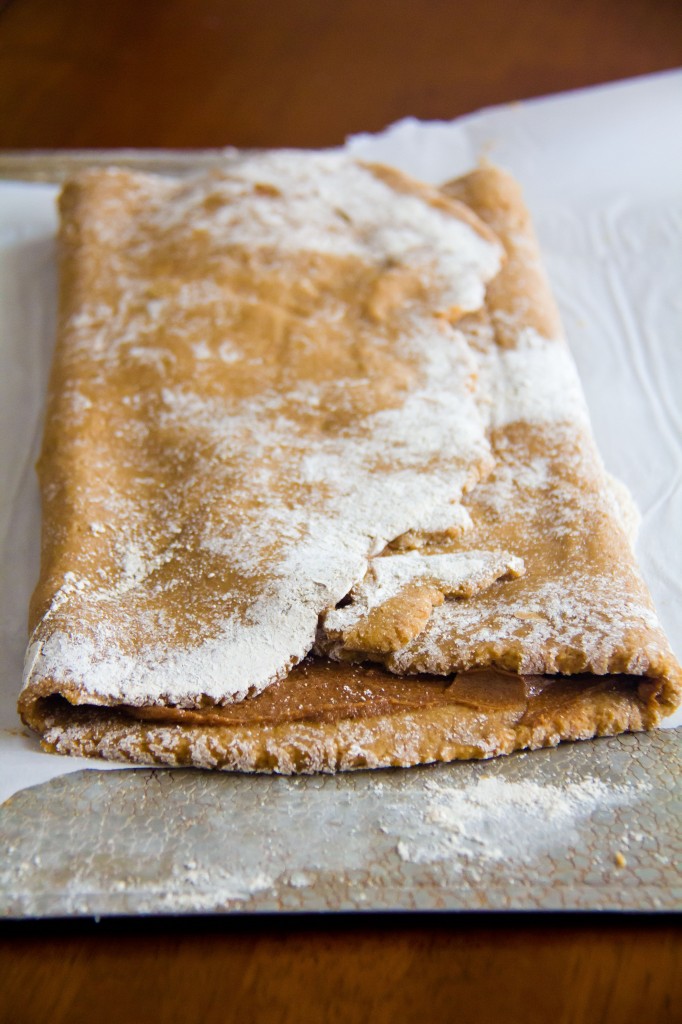 So this weekend was my last “summer hurrah.”  Grad school/dietetic internship starts in a couple weeks so we went up to my parents lake house to soak up what’s left of summer.  It involved margaritas, a puppy, the best m&m cookies, smoked salmon crepes, and some very heated ping-pong matches.  At one point a lawnmower was thrown (or so I hear…I wasn’t out there when that happened).

Other things, lately I’ve been listening to this song on repeat and then tear up every. single. time.  So I decided it’d be such a great song for our first dance at our wedding.  Well, I told Andrew of my brilliant idea and he told me me that, that was the song they danced to at the wedding we just went to.  Huh?  How did I miss that? I totally don’t remember them dancing to it.  I guess we’ll just have to dance to some cliche Sinatra now.  Oh or maybe James Taylor. 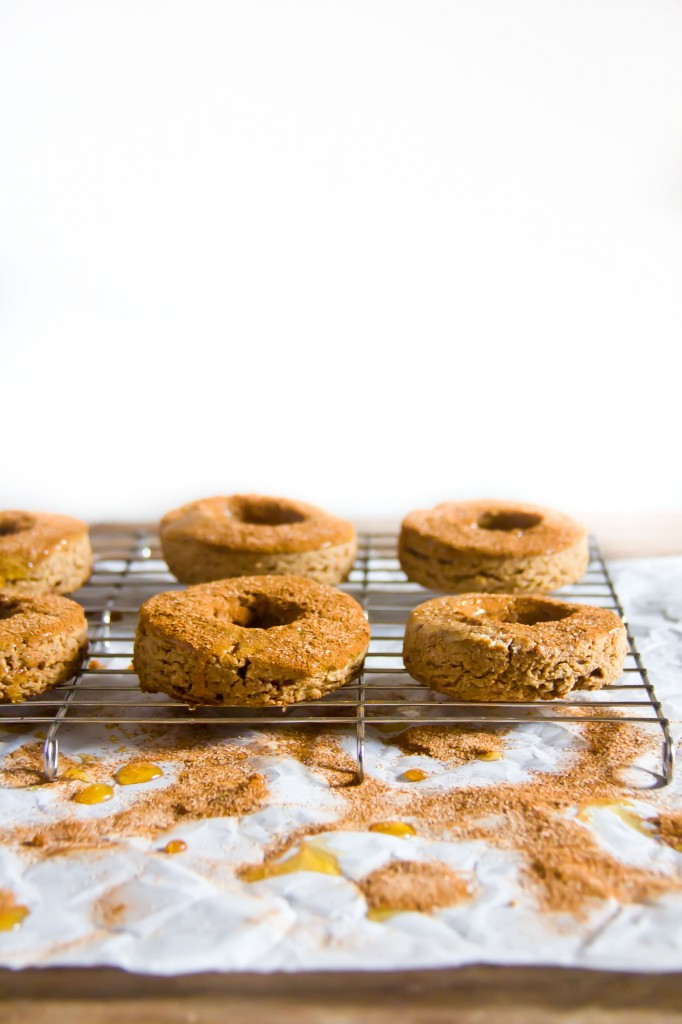 Other wedding things.  I’ve decided who is going to cater.  It’s different.  When I started thinking about who I wanted to cater my wedding I knew that I didn’t care if the food was super healthy or deep fried…I just wanted it to be something different.  So different it is. But since quite a few people who (I hope) are attending the wedding read this blog…I’m not gonna say whose catering.  Mainly because I would like them to still come to the wedding and I don’t want to scare them away with my food choice. 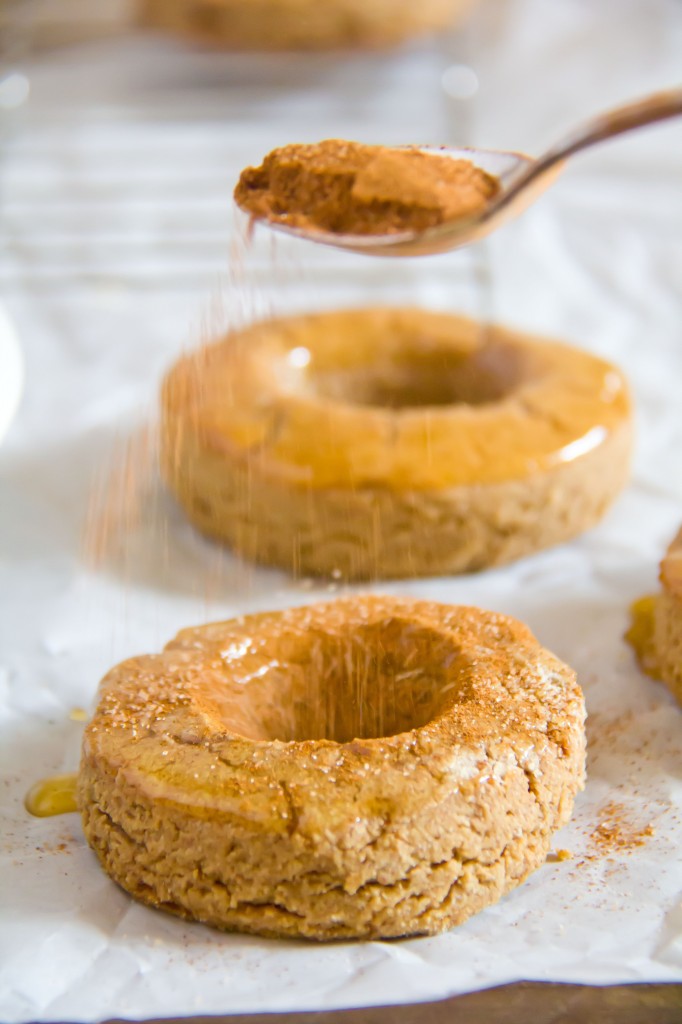 The best part about these?  They’re flaky.  Not flaky as in that one friend you have that says they’re gonna do something and then never does…but flaky in the best sense of the word.  The Pillsbury sense of the word.  Meaning these flake away in layers which just makes them that much more fun to eat.  Just know that these are more crumbly and less fluffy than anything ever made by Pilsbury…but still, I loved them. 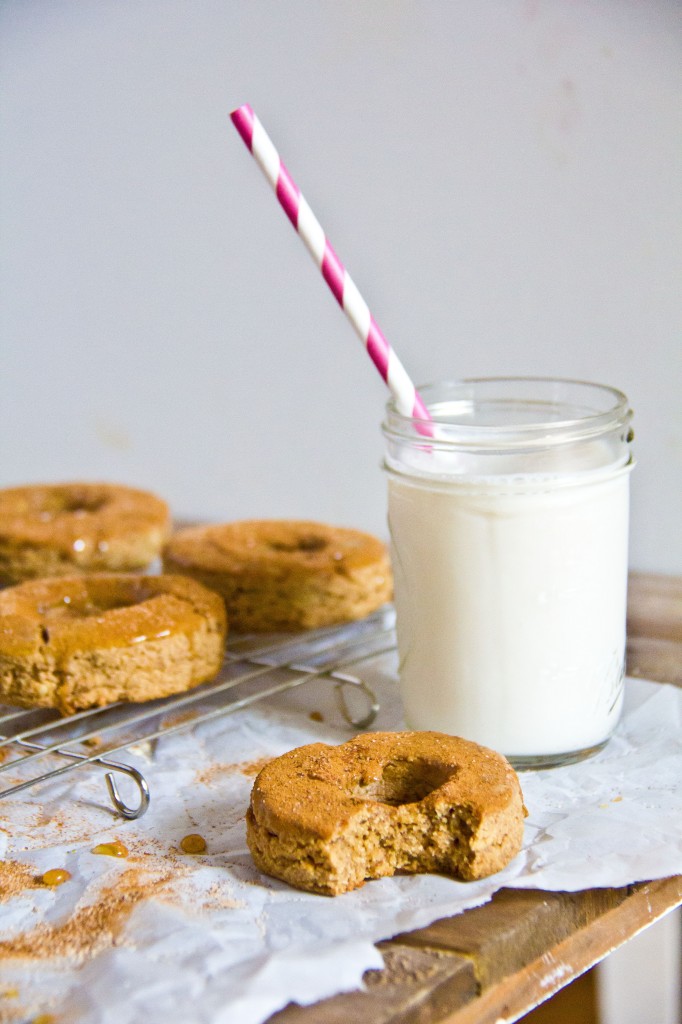 In a microwave-safe bowl, heat milk until warm. Stir the yeast into the warmed milk until dissolved. Let it sit for 5 minutes or until bubbly.

In the bowl of an electric mixer, add oat flour, almond flour, brown rice flour, brown sugar and salt. Add in milk + yeast mixture. Add in eggs and vanilla. Mix until a dough is formed. Roll/press dough into a ball (dough will be sticky, feel free to use oat flour liberally to coat the dough so it's manageable) and wrap in plastic wrap. Place into the fridge and allow to rest for 30 minutes.

In the meantime, make your filling. In a small bowl, mix together room temperature butter, brown sugar and cinnamon.

Roll out the dough to 1/2" thickness. Use a doughnut cutter to cut out doughnut shapes (I used a glass cup and the lid to my large vanilla extract bottle to make the doughnut shape). Place the doughnuts onto a greased and floured baking sheet. Bake doughnut holes for 10-11 minutes and doughnuts for 15-17 minutes.

In a bowl, mix together sugar and cinnamon. In as separate shallow bowl, heat 1/4 cup honey for 10 seconds, or until thinned. Dip the top of the doughnuts into the honey. Sprinkle with the cinnamon-sugar mix. Allow to cool on a cooling rack. 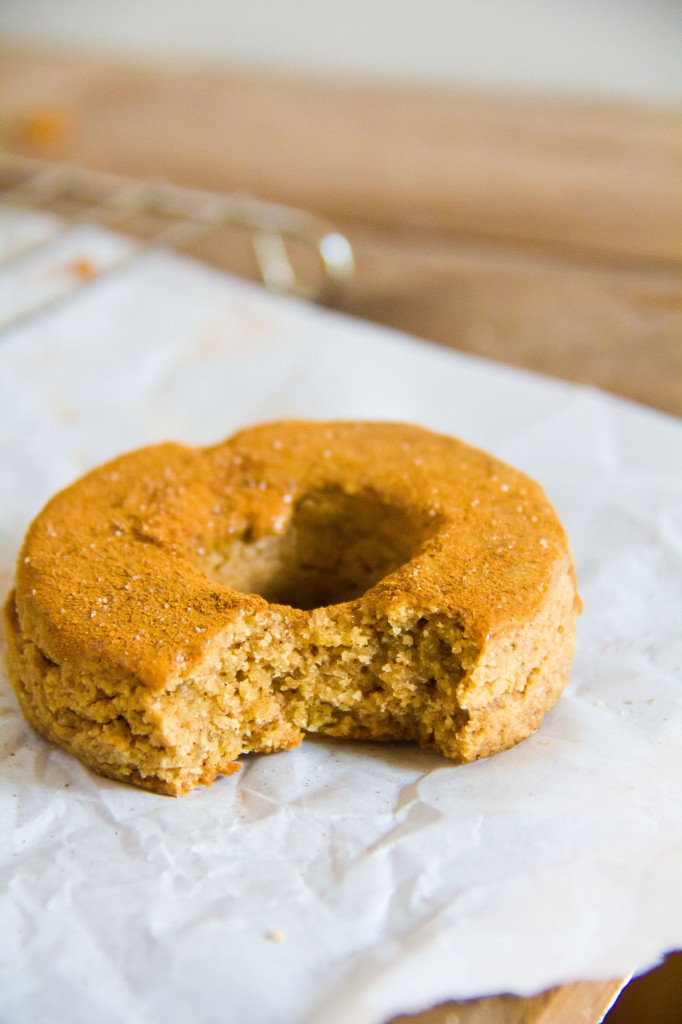 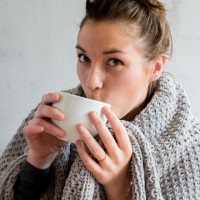 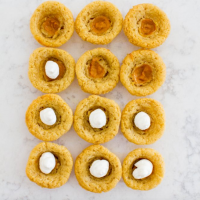 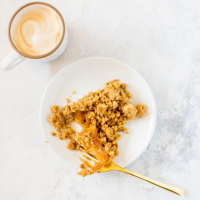 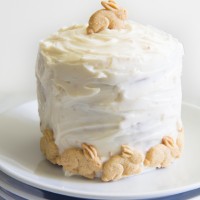