In the beginning of motherhood I feel like I had so much compassion for myself when I didn’t know what to do or days/nights felt overwhelming because I was learning.  But at 9 months I’ve found myself having far less self compassion.  I was talking to Andrew about how hard I’ve been on myself lately and I think it’s because I was expecting motherhood to get easier. 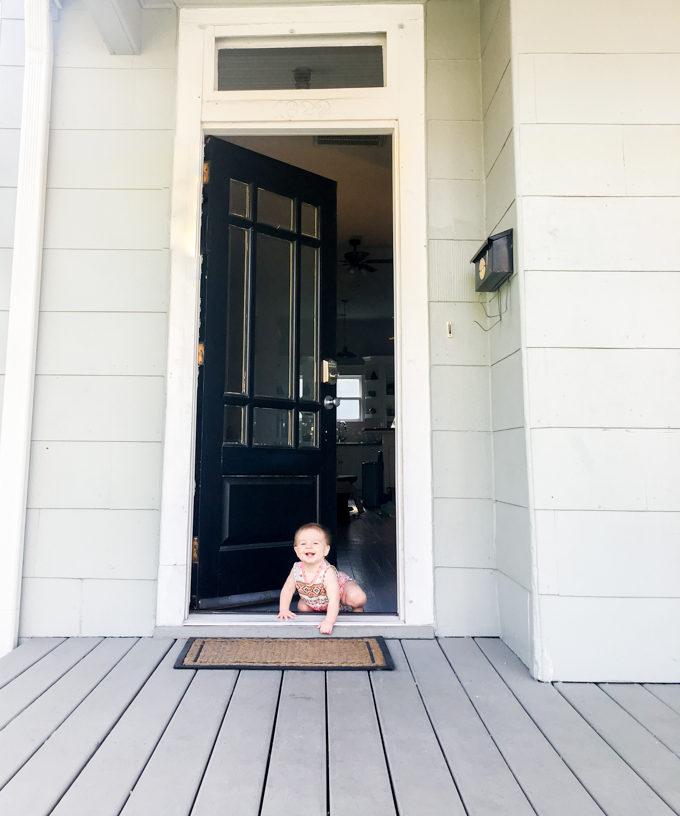 I was expecting me to adapt and it to not feel so hard. And while I know I have learned a lot and become way more resilient, at least one day a week brings me back to those initial sleepless night feelings when I’d find myself covered in milk crying on the bathroom floor because Jo wouldn’t stop crying and fall asleep.  I just thought it’d be easier by now or I’d feel like I got the hang of it. I feel myself being so impatient…wanting everything to get easier.  Some days go so smoothly and I feel like we got this. And other days Jo is fussy and upset and I don’t know why and I feel like I’M GOING CRAZY AND AN ALARM CLOCK IS GOING OFF INSIDE ME AND THEN…she falls asleep and I’m scrolling on my phone looking at all the cute photos I’ve taken of her.

Andrew says maybe an entire smooth day is too much to ask for. Maybe we should be looking for good moments in a day instead. And that sounds like good advice to me.

There’s nothing else I’d rather be doing with my life. But gosh. Some days are just so hard. But there are always wonderful moments even in those hard days.

I will say being plugged into a moms group (that has open, honest, authentic moms) has been SO INCREDIBLY helpful. Spending time with them is so restorative. 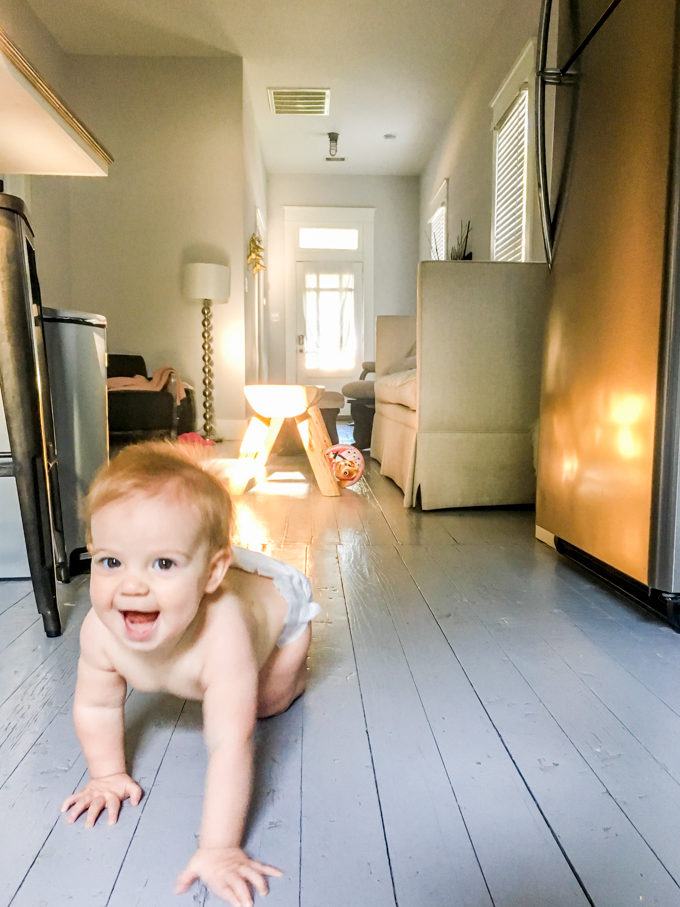 Right now Jo is down to 2 nursing sessions a day: one in the morning and one after her first nap. We’re using formula as needed. When I started weaning I remember getting to a Friday afternoon and I felt excited for the weekend for the first time in ages. Not excited because I didn’t have to take time to nurse Jo, I really liked nursing her and enjoyed the responsibility most of the time, but hormonally/chemically/mood-wise I felt like I was happy and it was something I don’t think I’d felt in 8 months.

Decreasing nursing sessions wasn’t really an intentional decision, it just started happening when my milk supply would plummet around my period and Jo was eating more solid foods anyways so we’d rely more on solids/formula for a bit. I’ve heard you can supplement with Ca/Mg to boost your milk supply around your period, but honestly I couldn’t handle one more thing…even a thing as simple as taking a supplement. My brain and body just felt depleted and I needed a change. 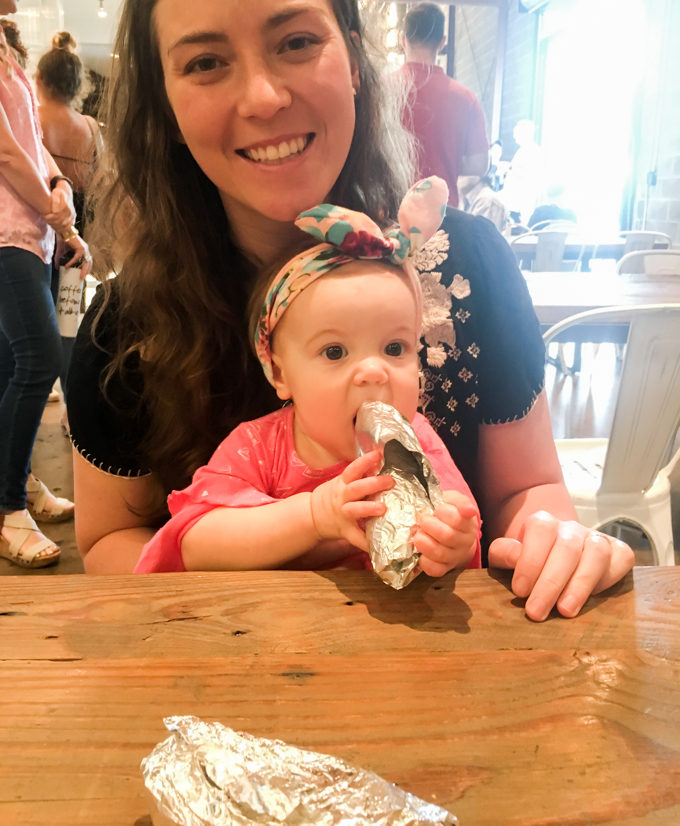 I decided a few weeks ago I don’t want to pump anymore, so now I only feed Jo when I’m with her and I’m always with her in the mornings, so that nursing session still makes sense. We are weaning based off what makes sense for our family.

I’m going to visit my niece (who’s still cooking!) in October and my plan is to have Jo completely weaned by then.  Andrew suggested I go on the trip alone and he keeps Jo.  At first I was like NO I’m not ready for that! But after thinking about it more I think being solo on the trip would be good for me.  A couple mom friends recommended having an event mark the end of nursing and that sounds like a good plan to me. 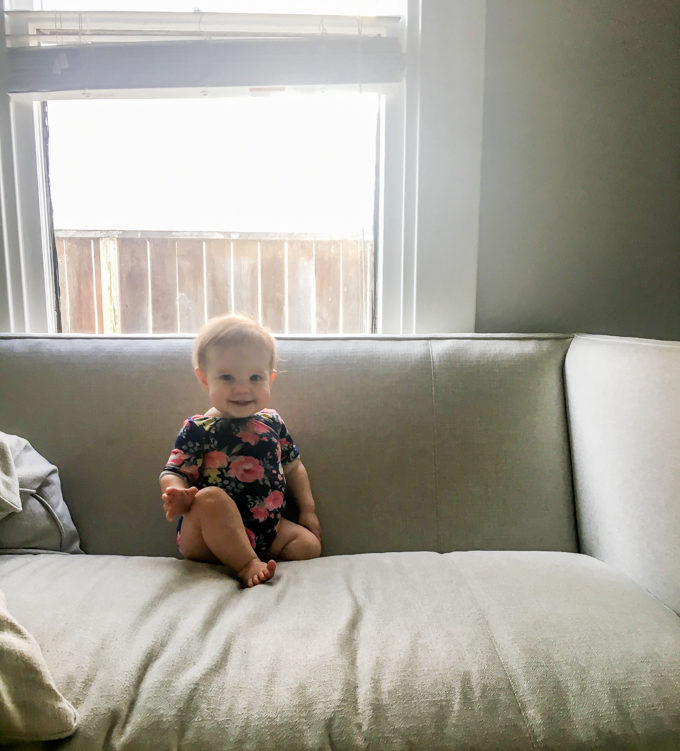 I was excited to do baby led weaning with Jo and referenced the book Born to Eat.  Awhile ago I posted Jo eating a puree from a pouch and a few people on IG messaged and emailed me saying “don’t you realize you’re not supposed to do purees and BLW?” To which I was like, “go away.” 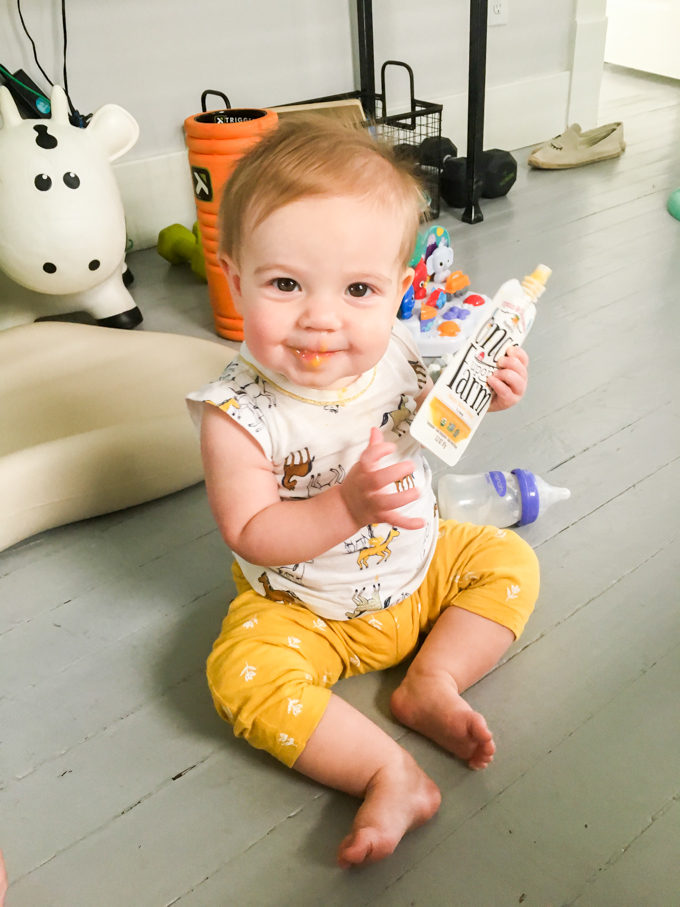 Jo prefers to feed herself, but sometimes that just doesn’t make sense for our life. Sometimes when I see people posting about BLW it looks like baby led orthorexia (that’s probably too harsh, but that is how it feels to me. I’m sure since I come from an eating disorder background I’m more sensitive to that than others would be).  All of the sudden there are food rules I’m supposed to follow to feed my child…whattttt???!!!  Jo is going to learn how to respond to hunger and fullness cues (aka self-regulate) because she lives in a house that values tuning into those cues and doesn’t put thinness above health. Her relationship with food isn’t going to be damaged because I feed her with a spoon sometimes without letting her hold the spoon once.

Jo’s first food was ice cream around 4 months old. It was the first time she showed interest in food so I let her have a taste. 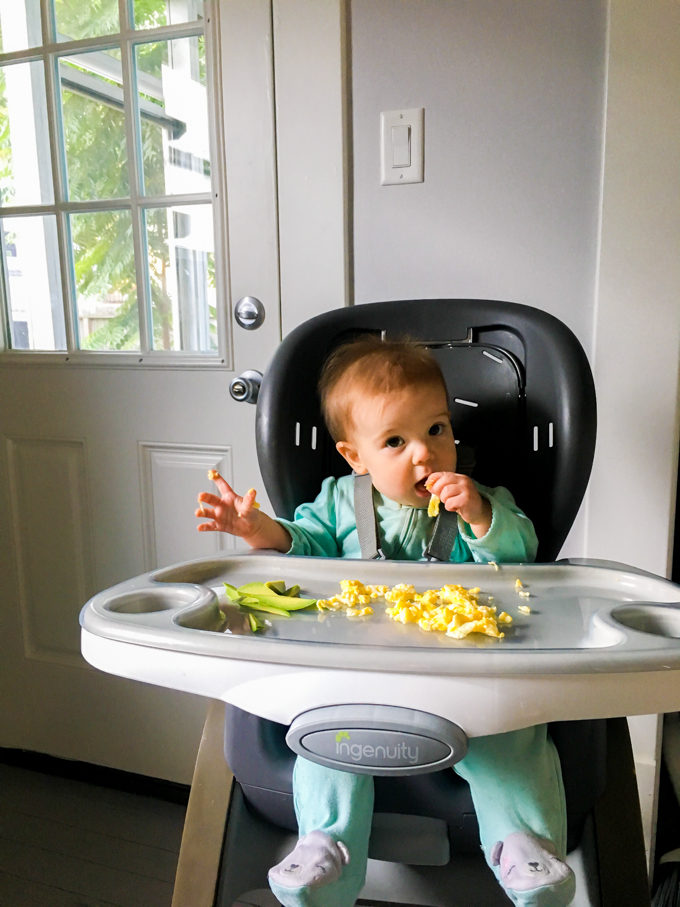 If you’re anxious about feeding your child because you had an eating disorder and would like a resource to give you some guidance, I think the Born to Eat Book

(<– affiliate link) is great. I’ve just skimmed it/used it as a reference guide. 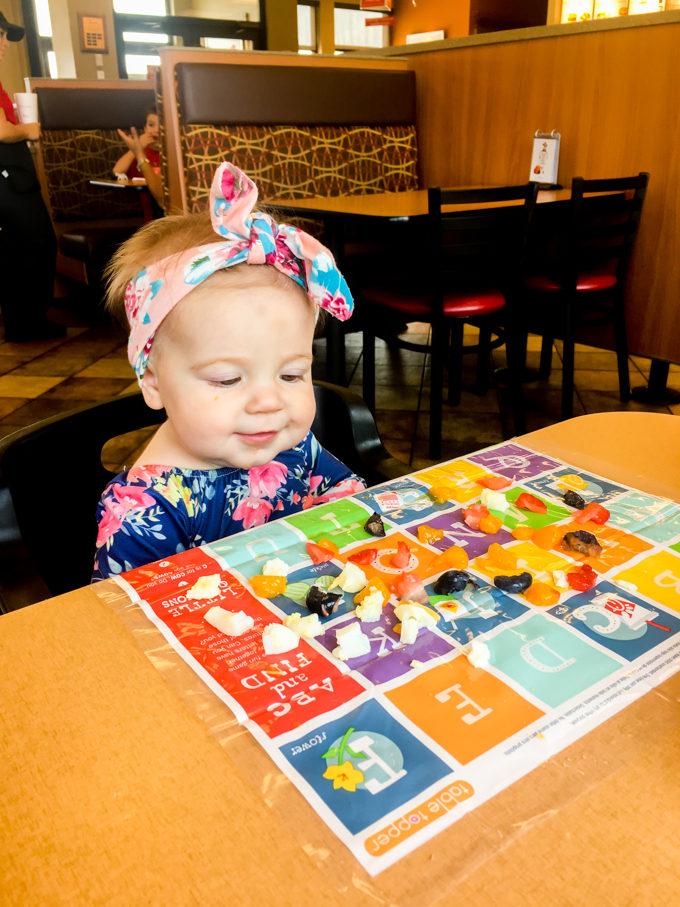 Right now we’re in a good patch with sleep after re-sleep training at the beginning of August. Jo goes to sleep at 7pm-ish and sleeps until 6am-ish. We’re going on a vacation in a couple weeks and I imagine her sleep will get off and we’ll be back to a rough place with sleep.  I’m learning to enjoy it when it’s good and hang on for dear life when it’s bad. 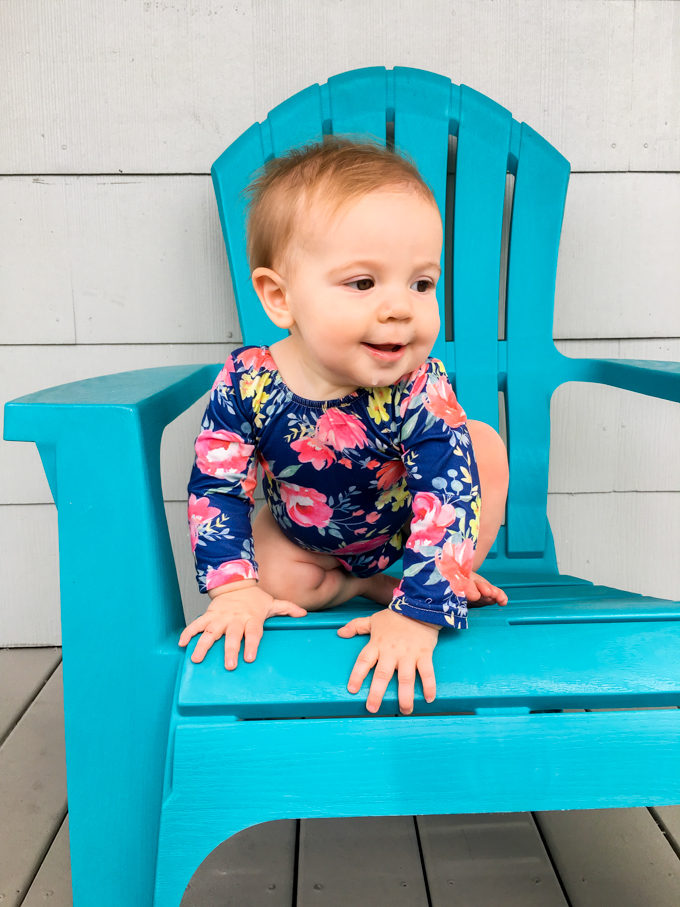 How daycare is going.

Good! Really good. Right now Jojo goes two days a week. The change has been really great for our family and I’m more open to looking into daycare earlier on for any future kids. Jojo likes a lot of activity and there’s a lot of activity for her with watching/playing with the other babies and big kids who attend the preschool. She doesn’t nap great there and just cat naps throughout the day, but it hasn’t affected her sleep on days she’s at home with me…so I’m grateful for that.

And yes…Jojo, Andrew and I have been sick as she picks up all the daycare germs, but, except for one night when her cough got pretty bad, it hasn’t been that rough. 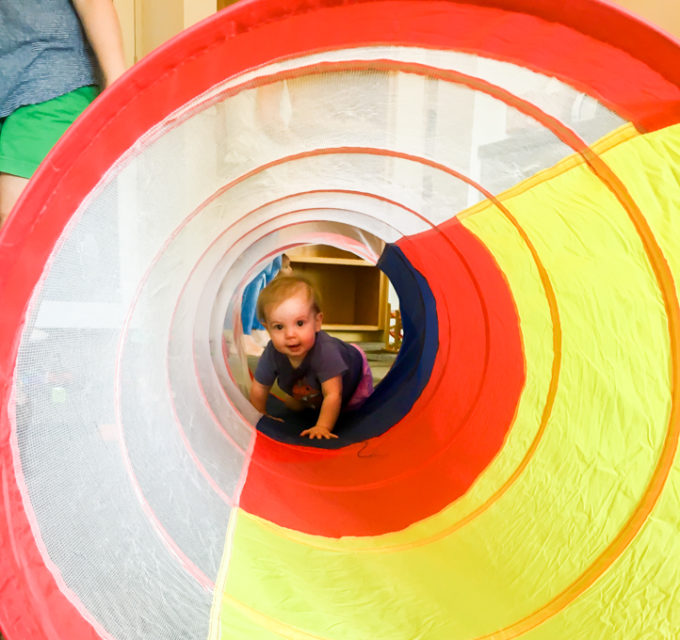 I’m loving seeing who she is more and more. I’m still her favorite person, but at the library or playgroups she’ll crawl away from me and go on an adventure by herself.  Sometimes I feel like she doesn’t have much stranger danger.  But of course there are times she cries when she realizes I’m not there.

I’ve heard some moms say they don’t love playing make-believe with their kids/it doesn’t come naturally to them, but I love it.  Yesterday I was pretending to be a lion and I went to kiss Jo and she ended up biting my lip lol, so that wasn’t great…but usually I have a lot of fun with it with her. Making her laugh is hard to beat<3 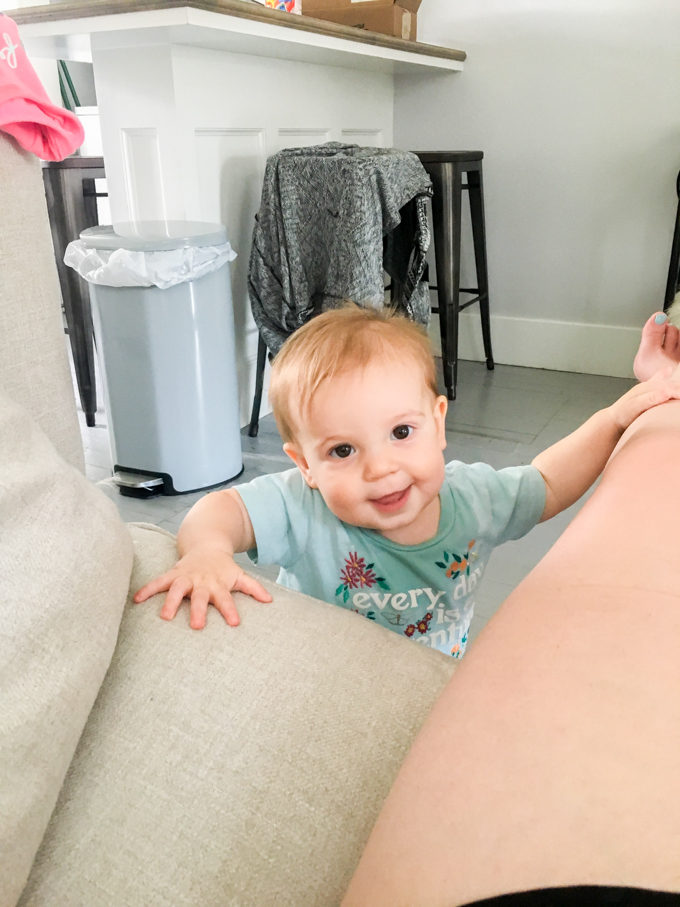 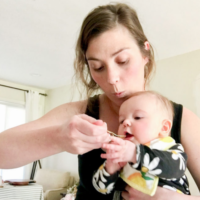 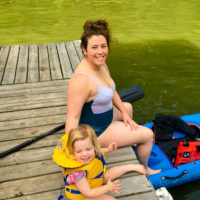 Nearly a year as a mom of two. 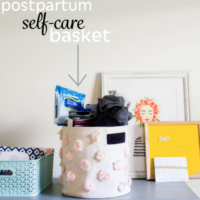 Gearing up to live my best postpartum life. 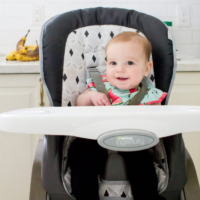