Microwave Cinnamon Roll for One

Cinnamon rolls rank up there with the happiest things in life.

Things like a) Labrador puppies who’s paws are 3 times too big for their bodies, b) rooftop bars in New York City and c) having slumber parties with you sisters.  Speaking of the latter, Saturday night my two sisters and I had a sisters’ night.

As soon as I heard word of this slumber party I knew it would involve 2 things: 1) food and 2) watching (and quoting) every single line of She’s the Man.  The night for sure involved those two things and then, after She’s the Man, we started watching season 1, episode 1 of Serena van der Woodsen’s life (aka Gossip Girl).  And then we watched episode 2.  And then we (luckily) all fell asleep.  Ugh.  Netflix.  It’s like a vacuum that sucks you in and doesn’t let you go.

Actually, really any high school drama show sucks me in.  I could (and have) sat and watched the lives of Seth, Ryan, Marissa and Summer for hours upon hours.

In between our highly important Gossip Girl watching and cheesecake eating, we also managed to add in a quick trip to the galleria to find them bridesmaid dresses for my wedding.  All three of us are like the slowest shoppers EVER so it was kind of concerning when we managed to find bridesmaid dresses for them both (none of my bridesmaids are matching) in under 2 hours.  Seriously, who are we?!

Then we went and ate at Fadi’s.  I love Mediterranean food.  The quickest way to my heart is with tzatziki sauce and feta.  Oh, and umm…cinnamon rolls.  I wish I could say I was deeper than that but sadly…I’m not.  Hmmm how could I incorporate my love for those 3 things into my wedding?  I’ll work on that.  In the meantime, you should make this here easy cinnamon roll recipe for breakfast.

Microwave Cinnamon Roll for ONE

2 dates, pitted (should be soft, not super dry)

In a small bowl, combine oat flour, baking powder and salt. Add in coconut oil and mashed bananas. Stir until a dough is formed. Roll dough into a ball. Set aside

For the filling, cut pitted dates into pieces and use the back of a fork to mash them into a paste. Add in cinnamon and continue to mash together until cinnamon is incorporated into the mashed date paste.

Sprinkle a flat surface with oat flour and roll out the ball of dough into a LONG rectangle. Make the sides of the rectangle straight by using a knife to slice off the uneven edges. Press the dough you cut off back into the rolled out dough and continue to roll the dough into an even longer rectangle.

Spread the cinnamon-date paste over the rolled out dough. Fold the dough in half LENGTHWISE. Now, roll up the folded over dough into a pinwheel so that it makes a cinnamon roll shape. Place rolled up cinnamon roll into a large, greased, microwave-safe mug or ramekin. If desired, gently press the cinnamon roll down so it takes the shape of your dish. Microwave for 1 1/2 to 2 minutes. Remove from microwave and top with greek yogurt icing. Serve hot. 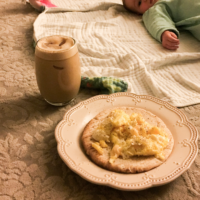 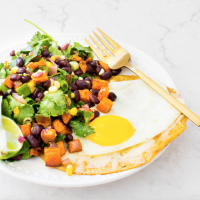 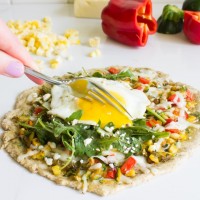 Shredded Zucchini & Fontina Breakfast Pizza for ONE + 5 other zucchini recipes