For our 1st wedding anniversary, Andrew planned us a weekend getaway to Hotel Zaza (where we spent our wedding night the year before).  At one point he was calling it a stay-cation, which I told him he couldn’t because stay-cation doesn’t sound like an exciting, sexy getaway.

Disclosure: I hadn’t had this much to drink…ever. (Except maybe on our Cabo honeymoon with that Don Julio 1942.)

We checked in at Hotel Zaza Saturday and were greeted with champagne. 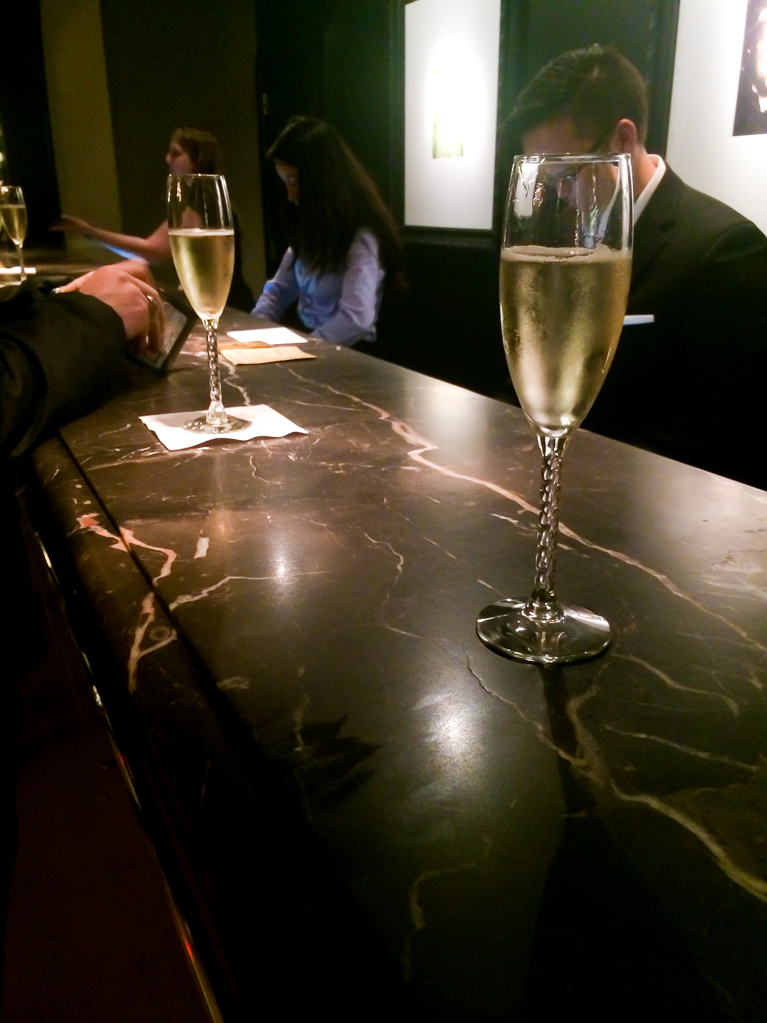 We headed up to the room to get ready for dinner.  Here’s the view from the room. 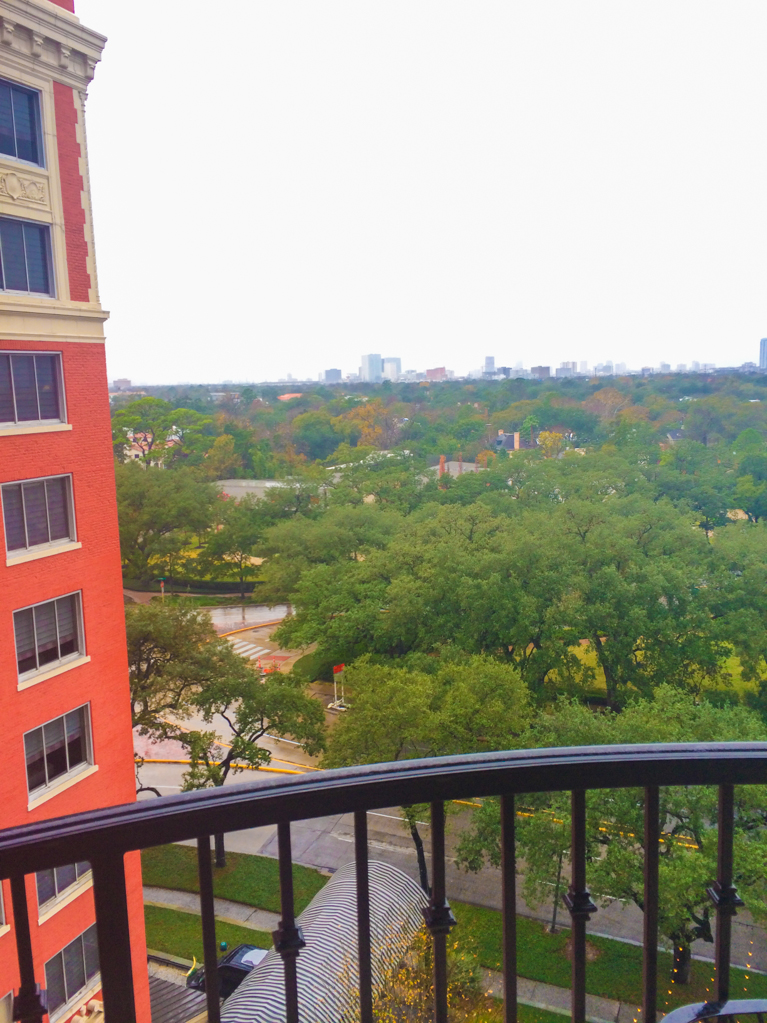 Then we were off to dinner at Reef.  I had made reservation using OpenTable.  I found Reef on this list from Bon Appetit and had been wanting to go.  An anniversary was the perfect occasion.

The meal started with cocktails.

Moscow Mule for me and a Maple Manhattan for Andrew.  I’ve really been loving ginger beer recently, so I loved this. 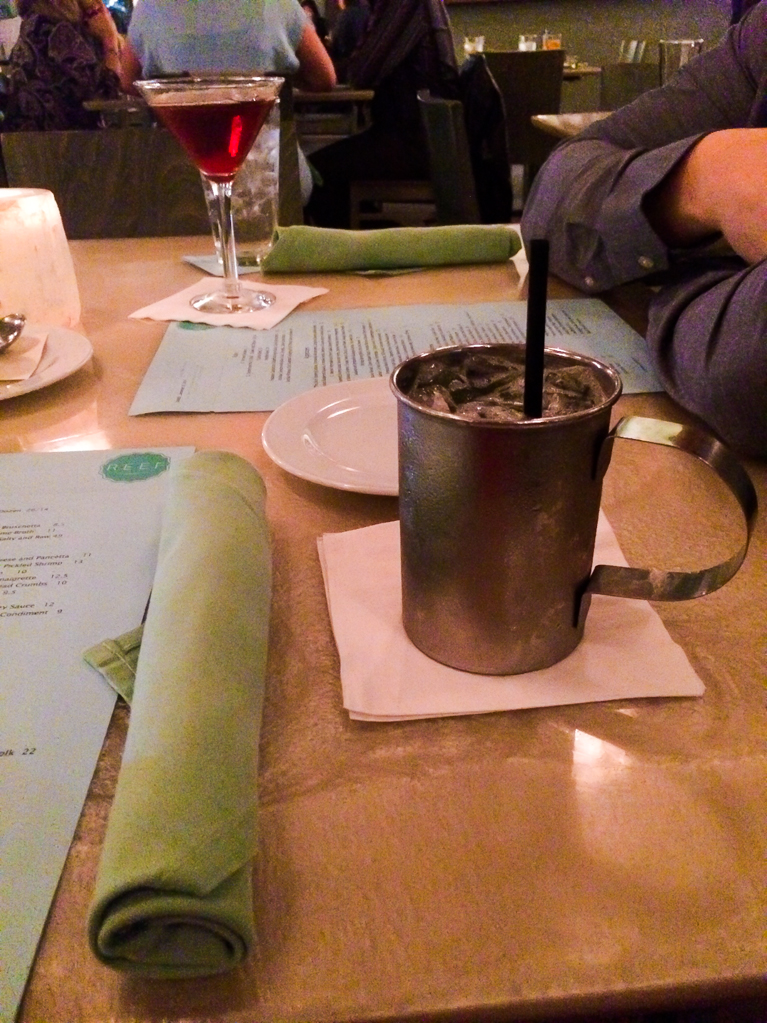 Then fluffy rolls and pepper jelly were brought out.  My only complaint about Reef was that I wish the rolls would have been biscuits, but that’s just a personal preference.  The rolls were fluffy and soft and dense (in a good way), I’m just more of a biscuit person. 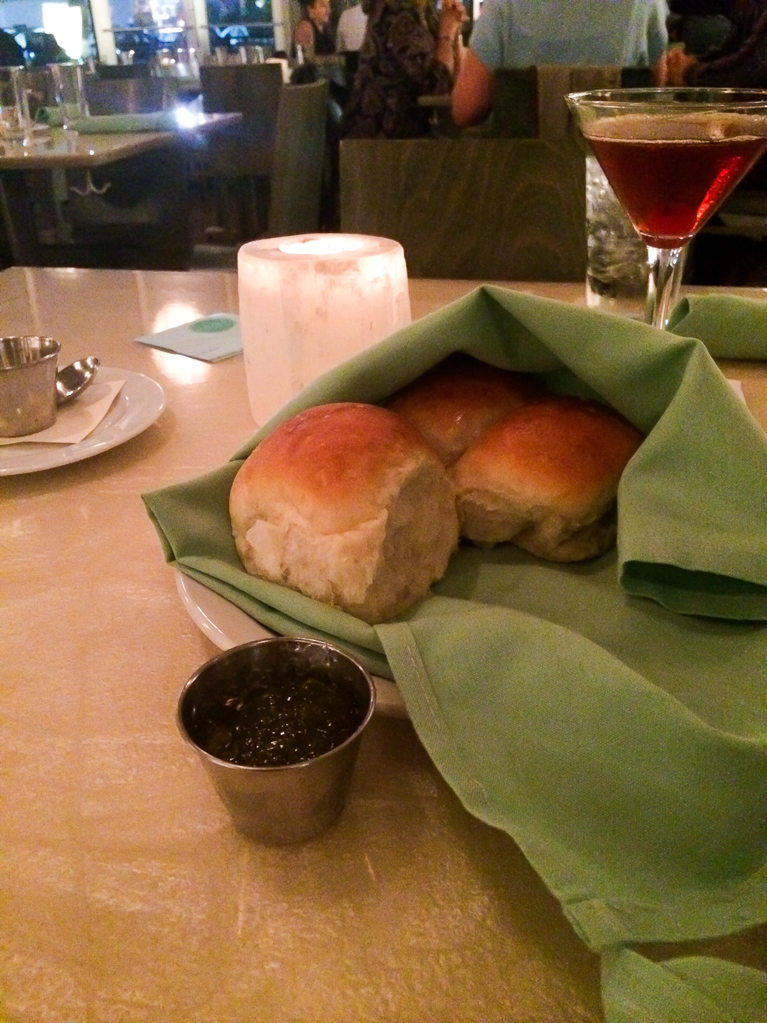 For my entree, I ordered the Slow Baked Salmon served with Meyer Lemon Risotto and Chili Oil.  I loved this dinner so I recreated for the blog and am sharing next week!

The lemon was so subtle, but still present.  And then, there was sea salt over the salmon, which I just died over.  Oh so so good. 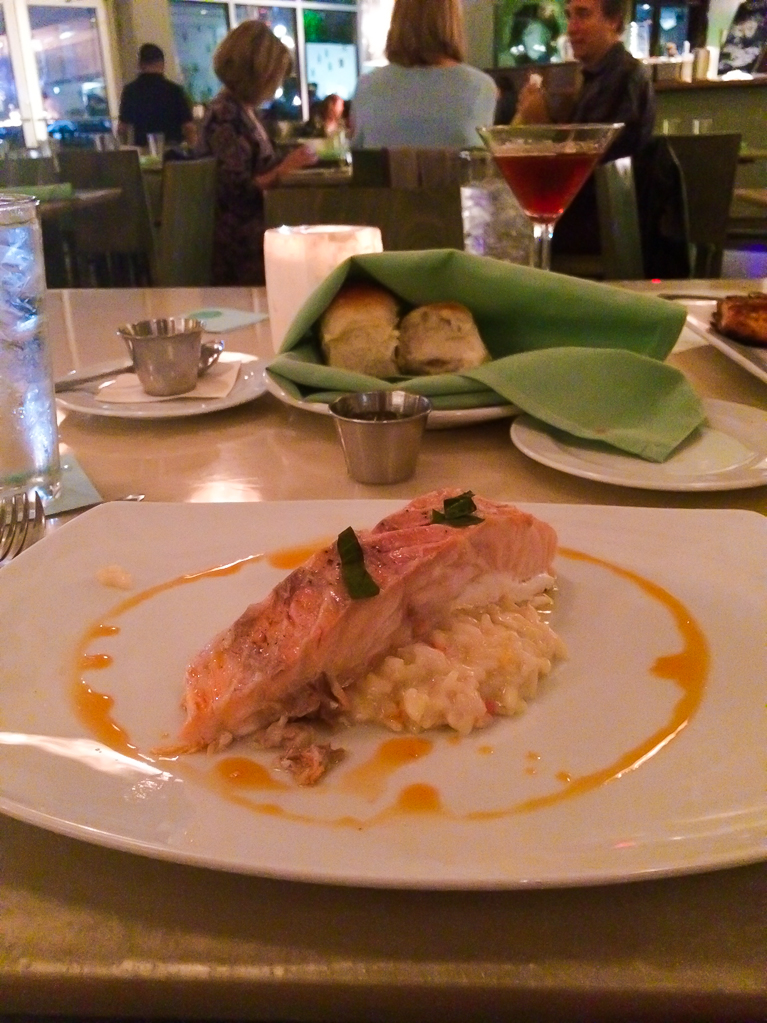 Andrew ordered the Redfish on the Half-Shell served with sauteed greens and fried mac & cheese. 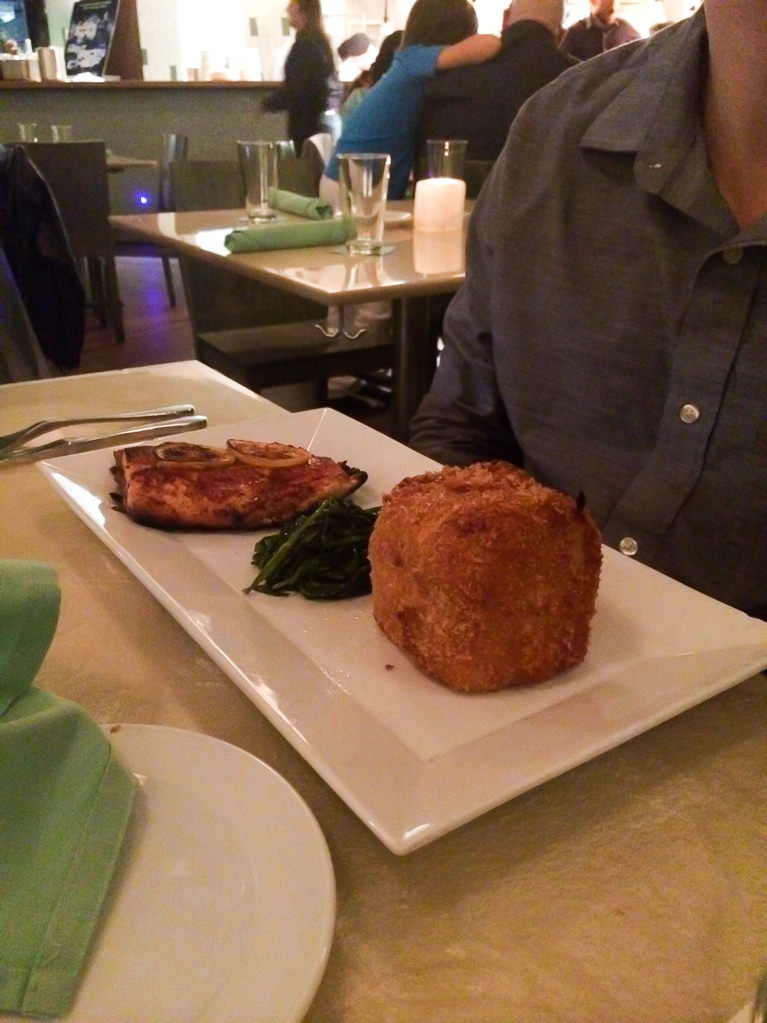 The mac & cheese was so crispy on the outside and gloriously cheesy on the inside.  I helped him quite a bit. 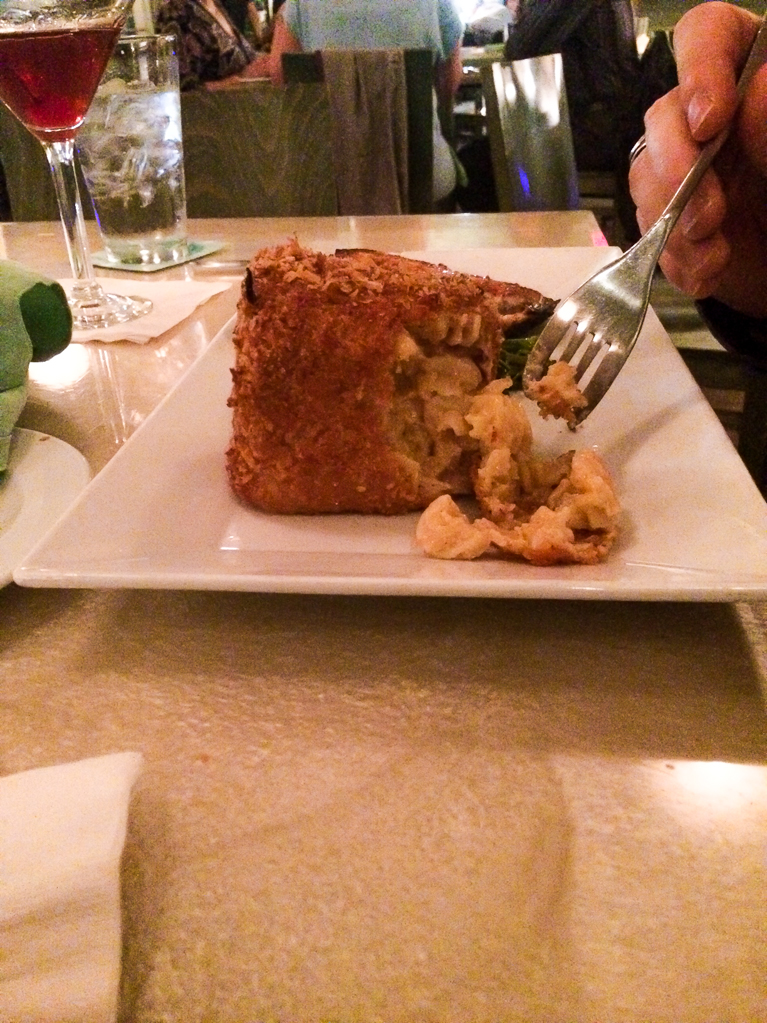 When I had made our reservation using OpenTable, there was a part where you could add “special notes.”

So I mentioned that we were celebrating out 1st wedding anniversary.  After our meal we were served Reef’s “No Minors Milkshake” free of charge. 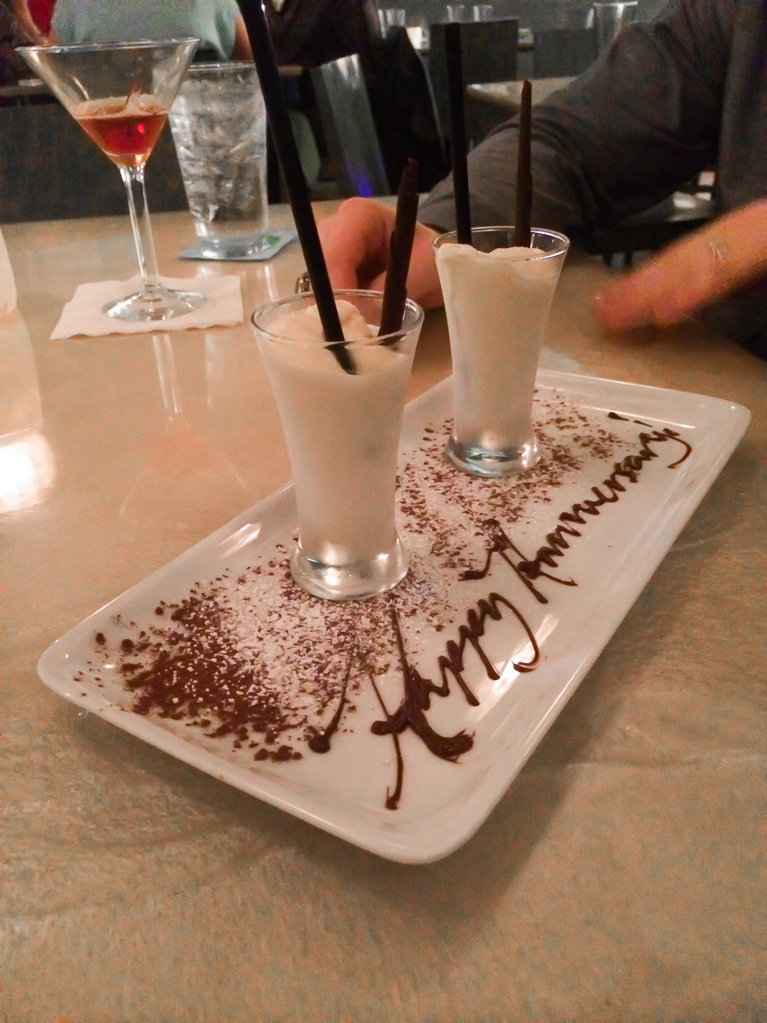 We took the hotel car service (free of charge for anywhere within 5 miles of Hotel Zaza) back to the hotel.  We had drink coupons so we went to the bar for more drinks (…I told you there was a lot of alcohol.) 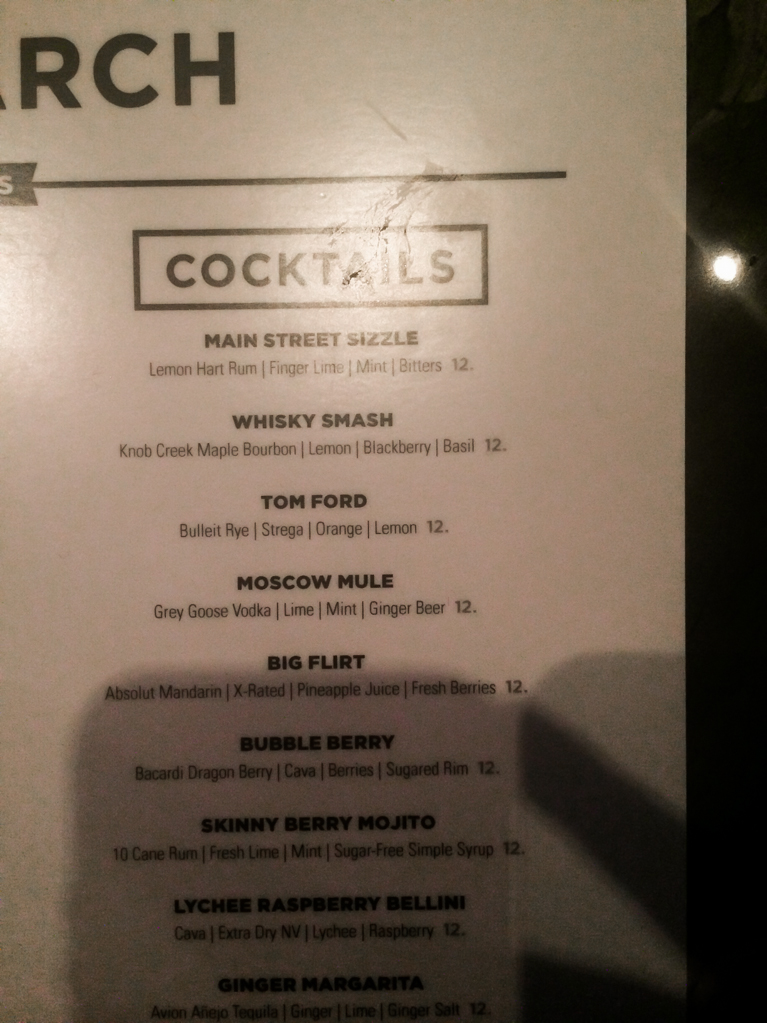 I ended up getting the Whiskey Smash.  So good.  Andrew got a scotch. 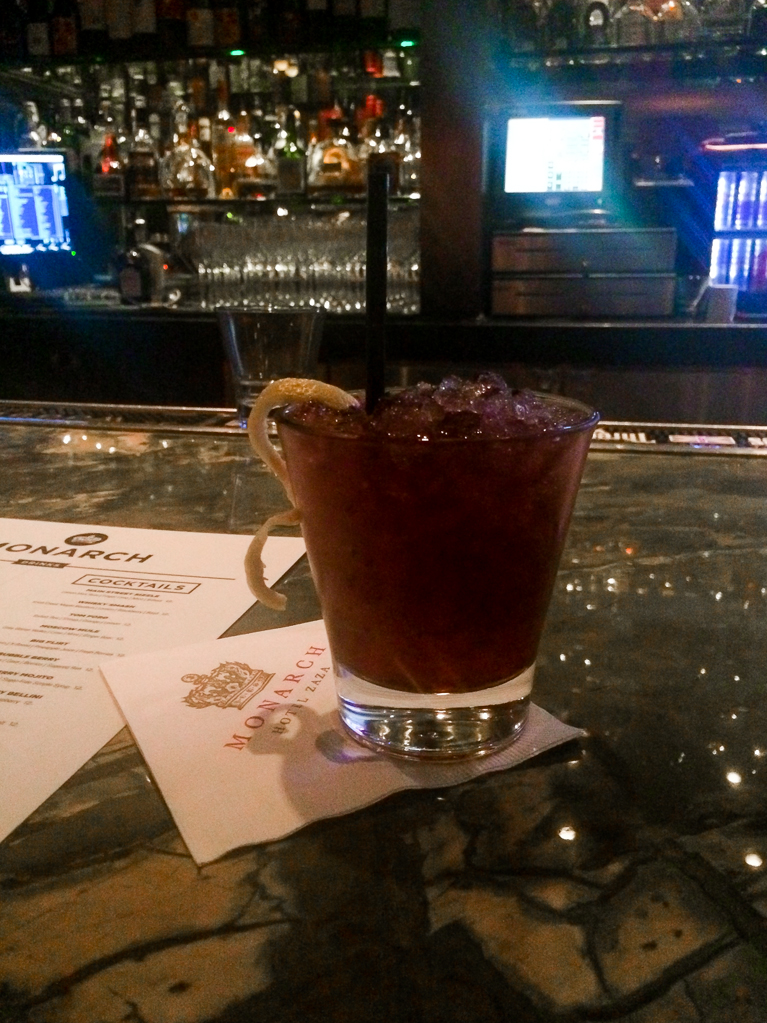 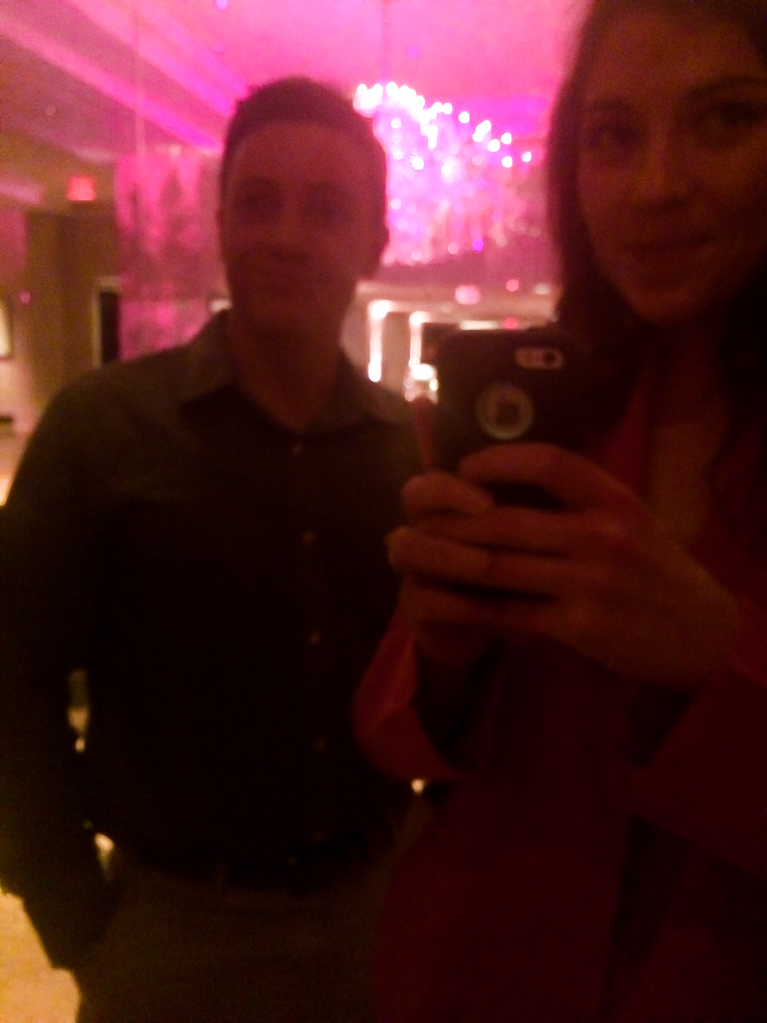 Then we went up to the room for year old wedding cake that we had brought with us. 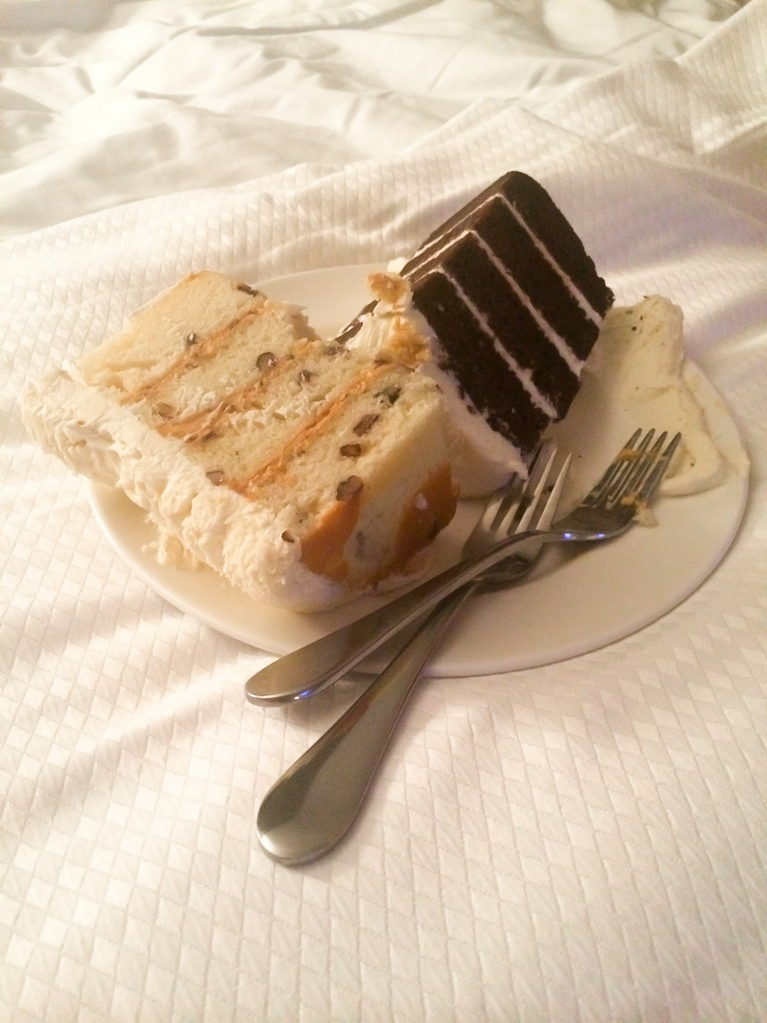 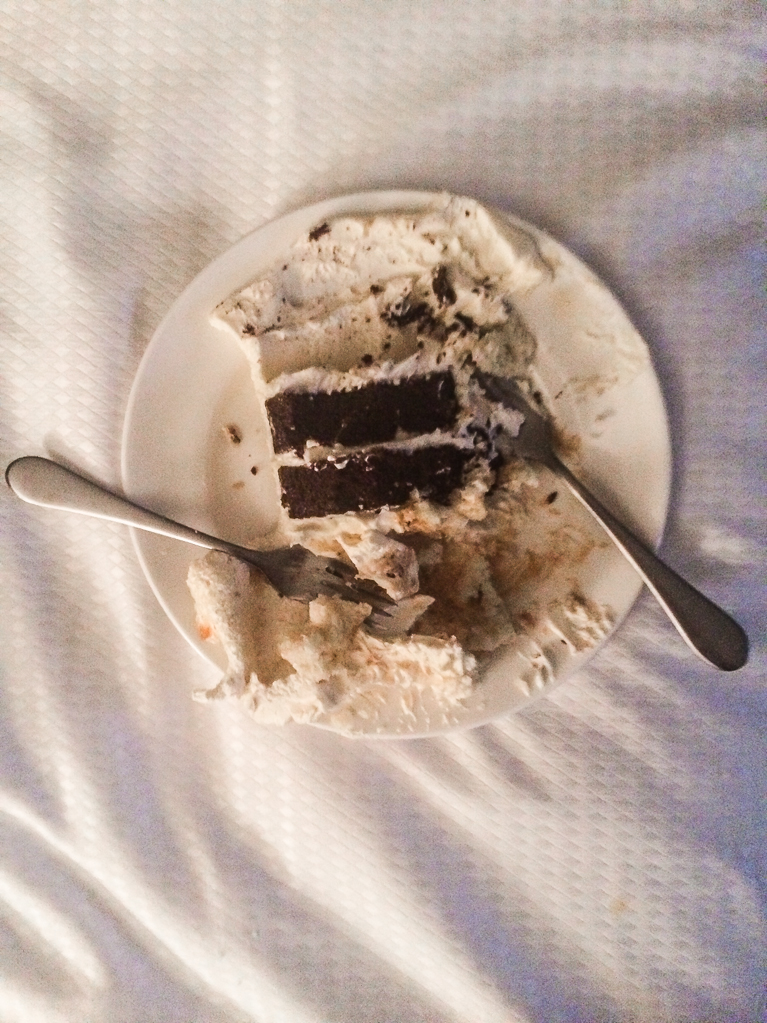 Then the hotel showed up with a bottle of champagne & chocolate covered strawberries for our anniversary.  So much celebrating.  Possibly a little too much;) 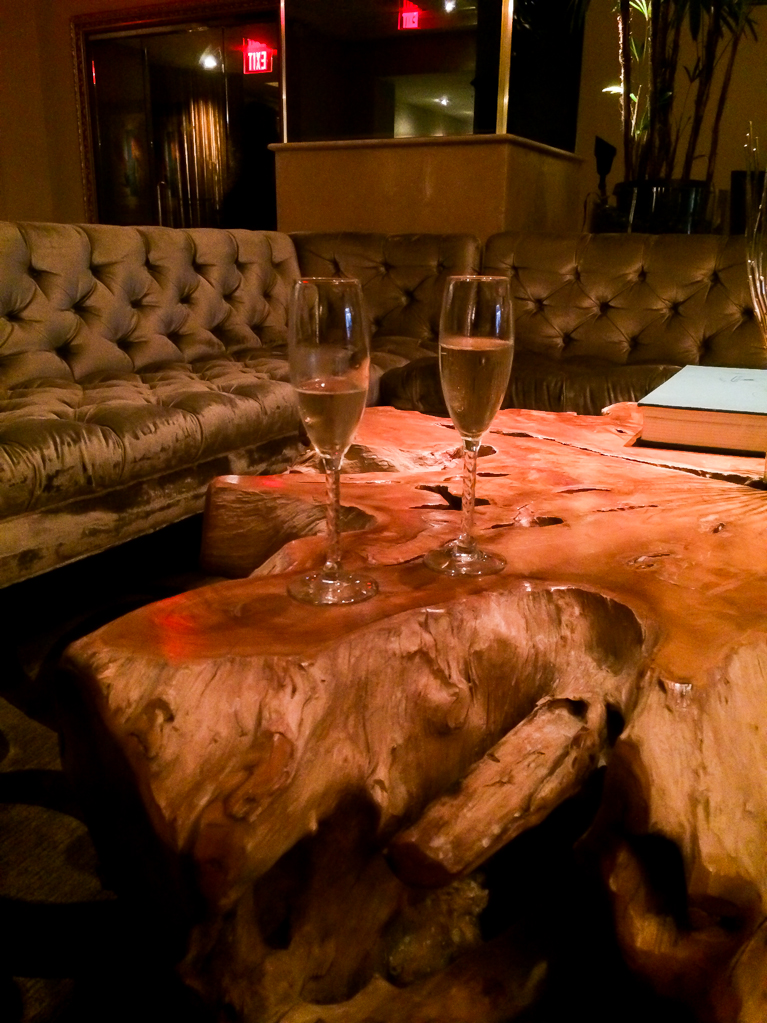 The next day we headed to the Hotel restaurant, Monarch, for breakfast.

I got the Texas Torrejas, which was french toast made in an orange + cinnamon batter.  Served along with berries, granola and NUTELLA WHIPPED CREAM (it was actually even better than I thought it was going to be).

Andrew got an omelet with crispy breakfast sweet potatoes. 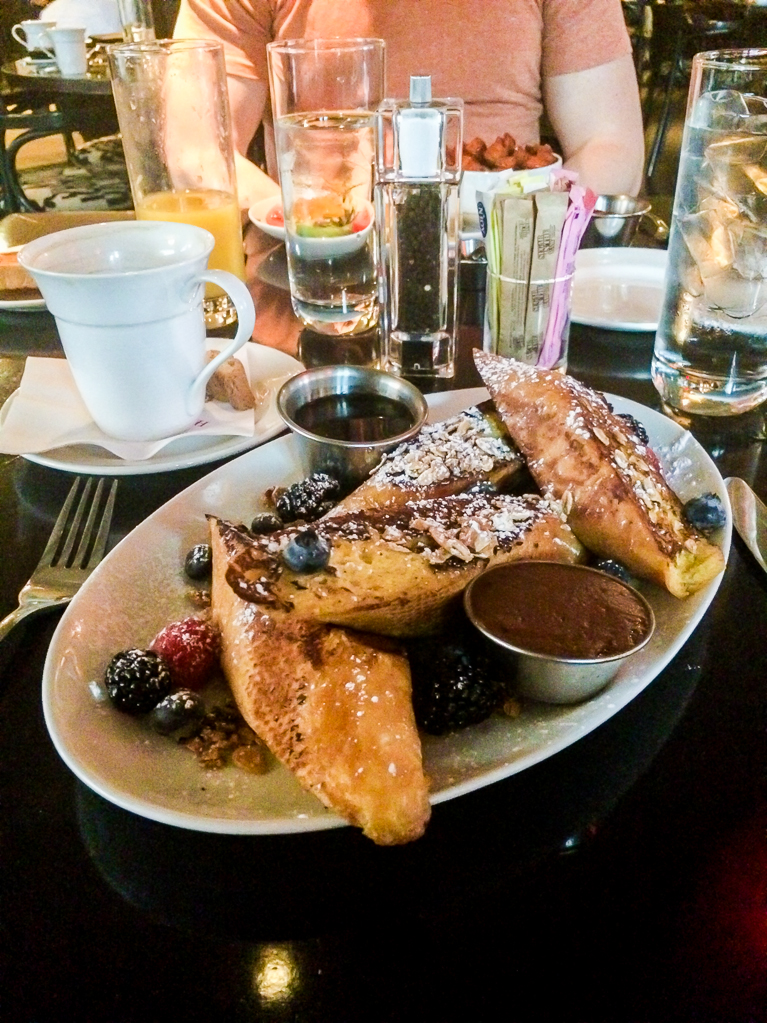 And then we left the hotel and stopped by the grocery store on the way home to stock up on some smarter choices than booze.

Such a fun anniversary.  Can’t wait for another year together. 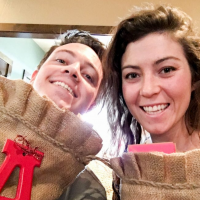 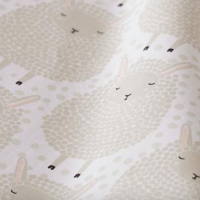 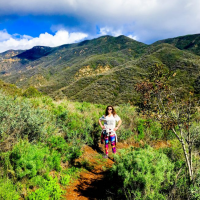