Friday evening we got to go for a media tasting at a new pizza place in town, Cane Rosso! 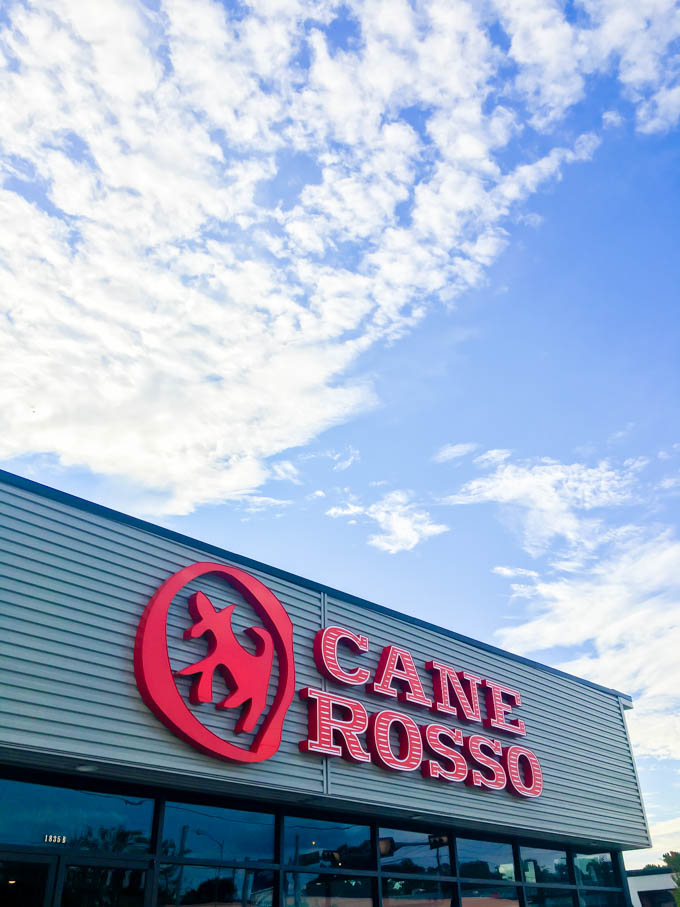 I am so excited to have a new restaurant near us! Houston has a great restaurant scene, but where we live is lacking in epic restaurants so I am so glad a new place opened! AND I’m glad we liked it!  We will definitely be back to Cane Rosso as paying customers (our media dinner was free of charge, as media dinners are…i’m just big on disclosure and like to let you know!). 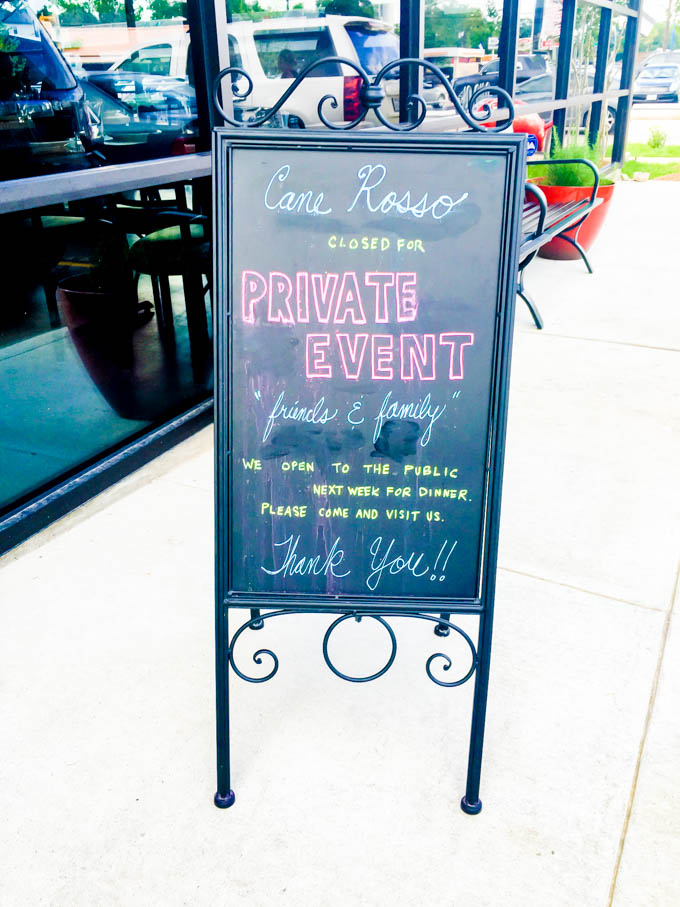 The lovely people from the restaurant let me invite up to 6 people so we turned the evening into a triple date night with some of my grad school friends + their significant others. 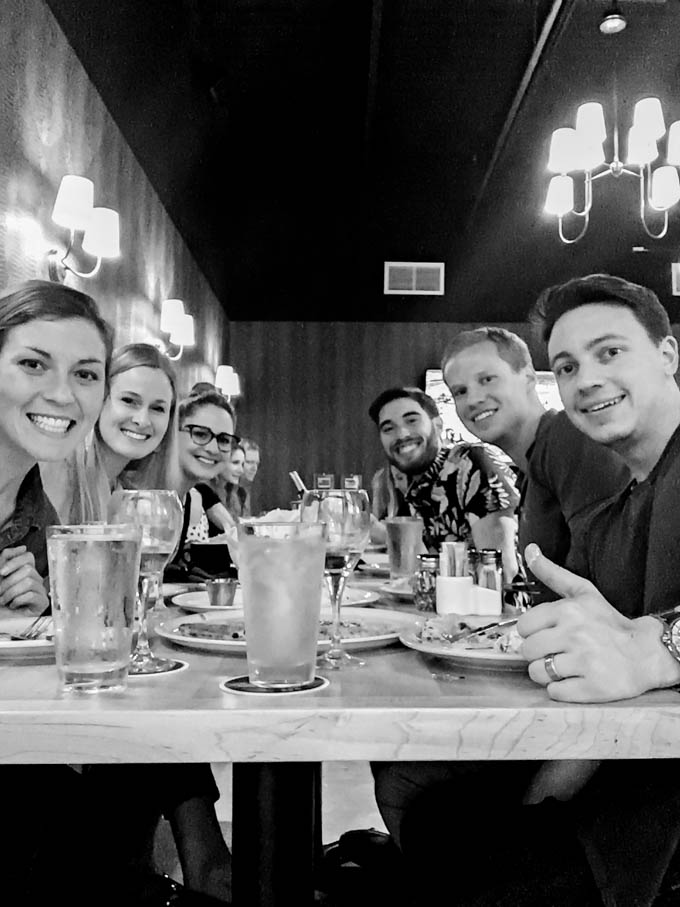 At the restaurant it was BYOB that night and I had told my friends I was going to bring a bottle of red, but then…I feel asleep outside on my yoga mat for 30 minutes and ran out of time to grab the wine.  Luckily my friends brought some to share. 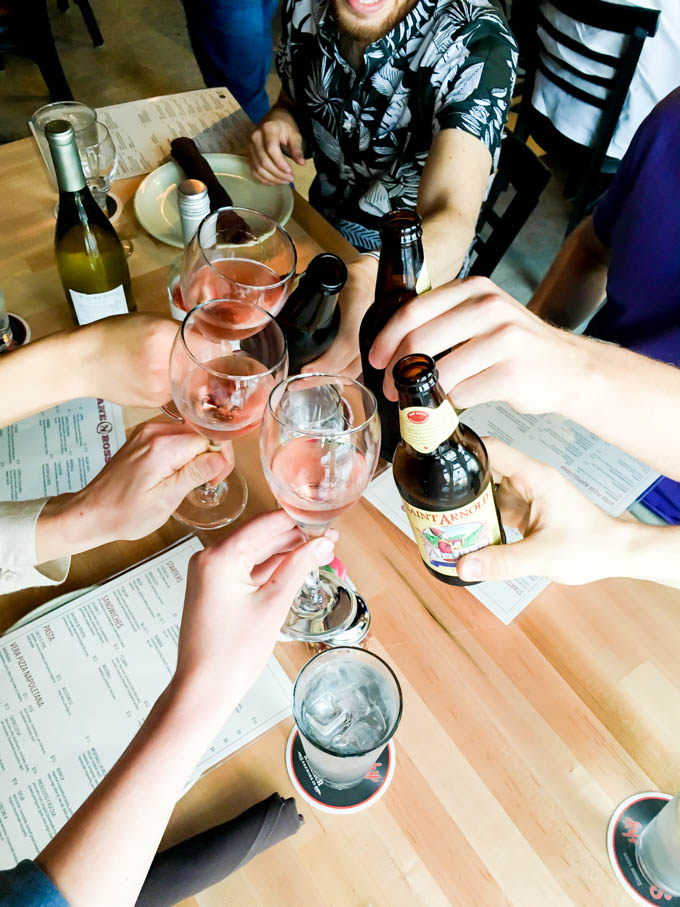 On to the meal!

We ordered several appetizers.  My favorite of which was the burrata.  Andrew had never had burrata before and he was in love too.  I would go back to have this as a meal.  SO GOOD with the creamiest cheese + crisp (but doughy) pieces of bread + sautéed greens + fresh arugula + sea salt. 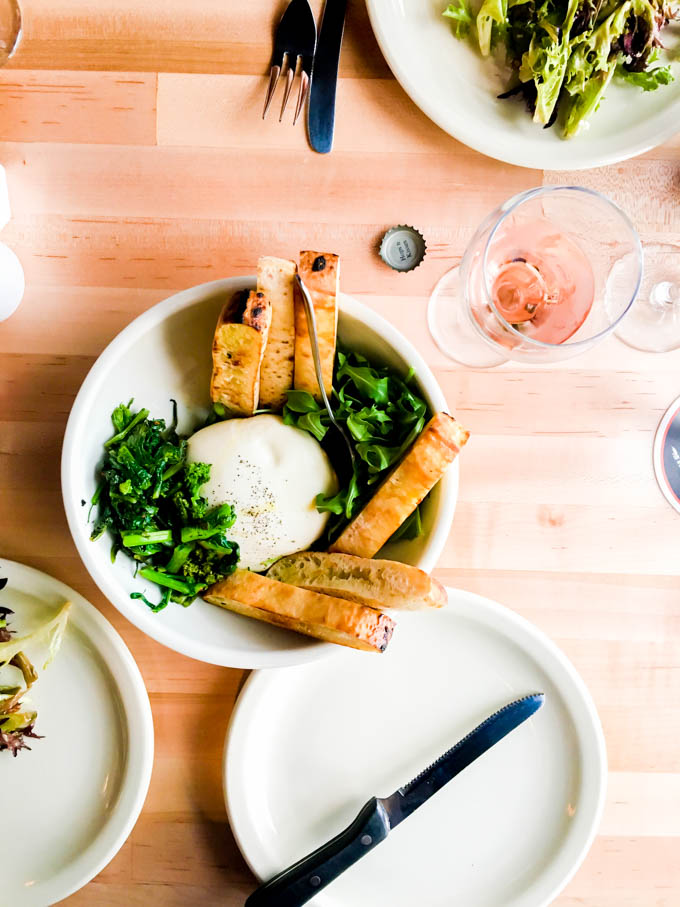 Another appetizer was their focaccia bread, which was this super puffy bread.  Unlike any focaccia I have ever seen! Such a neat presentation.

The waiter who brought it out warned us not to press on the bread (because there was just air and super hot steam inside), but I wasn’t listening and immediately pressed down and hot steam went everywhere.  You live and you learn. 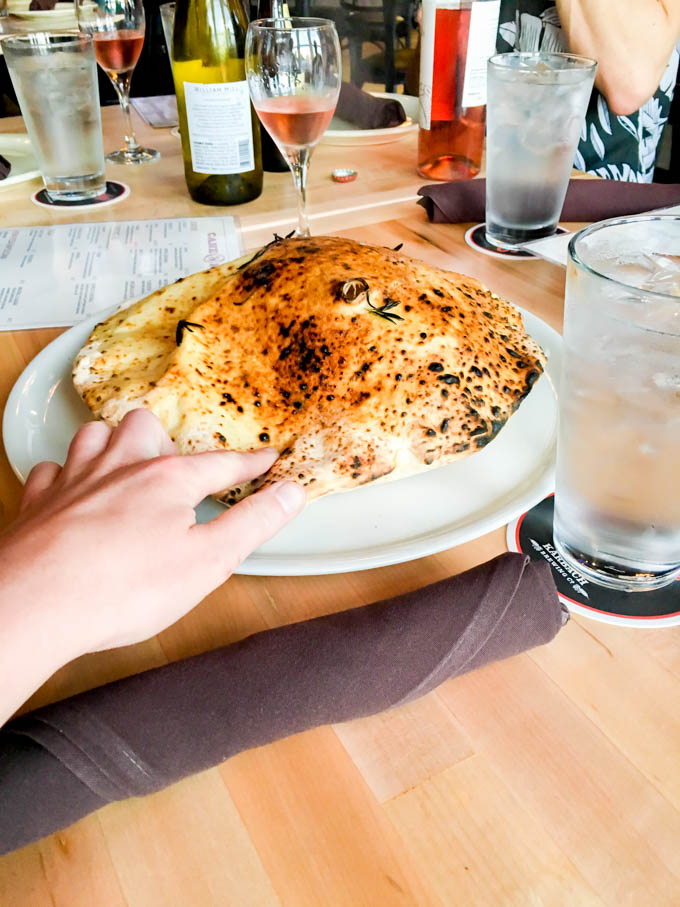 Then each couple choose a pizza to order. 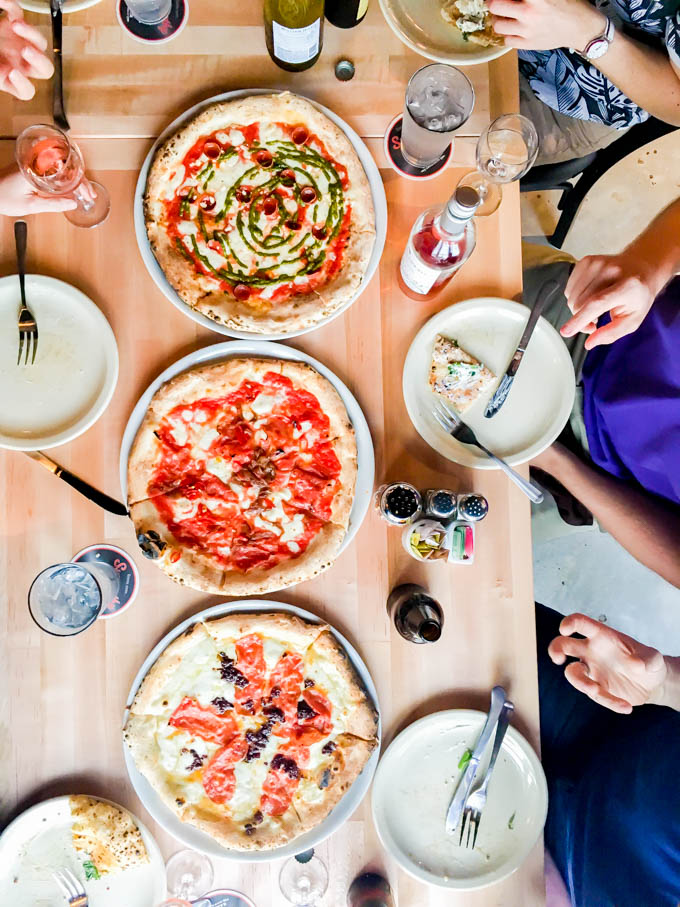 Andrew and I ordered the Honey Bastard, which isn’t on their menu but the waitress sold it to us!  I had to ask multiple times to make sure that the name was really ‘Honey Bastard’.

It was a pizza with bacon marmalade, habanero honey (it wasn’t too spicy!), salami, and mozzarella.  I wasn’t feeling the sweet and savory combo that night, but it was good and I would order it again if I was craving sweet + savory. 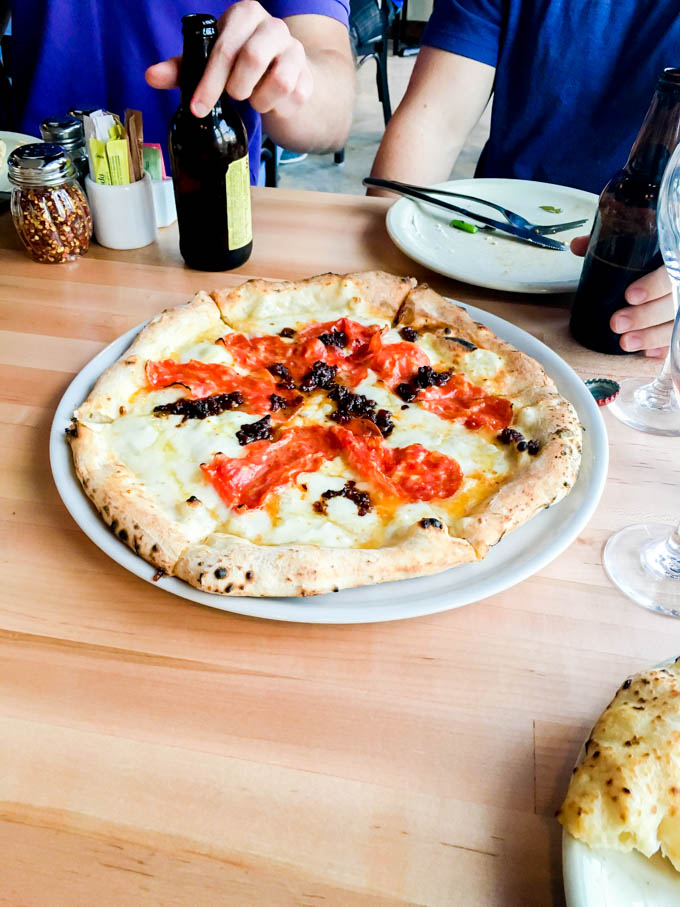 Since the pizza is SO thin (it would be hard to pick up a piece), we were instructed that it is supposed to be eaten with a fork and knife from the inside out.  And then you are to use the crusts to soak up any delicious pizza oil that is left over.  OKAY!

Then we played pass the pizza lol.  Each couple would eat the pizza in front of them until they’d had enough, then we’d rotate the pizzas down the table. 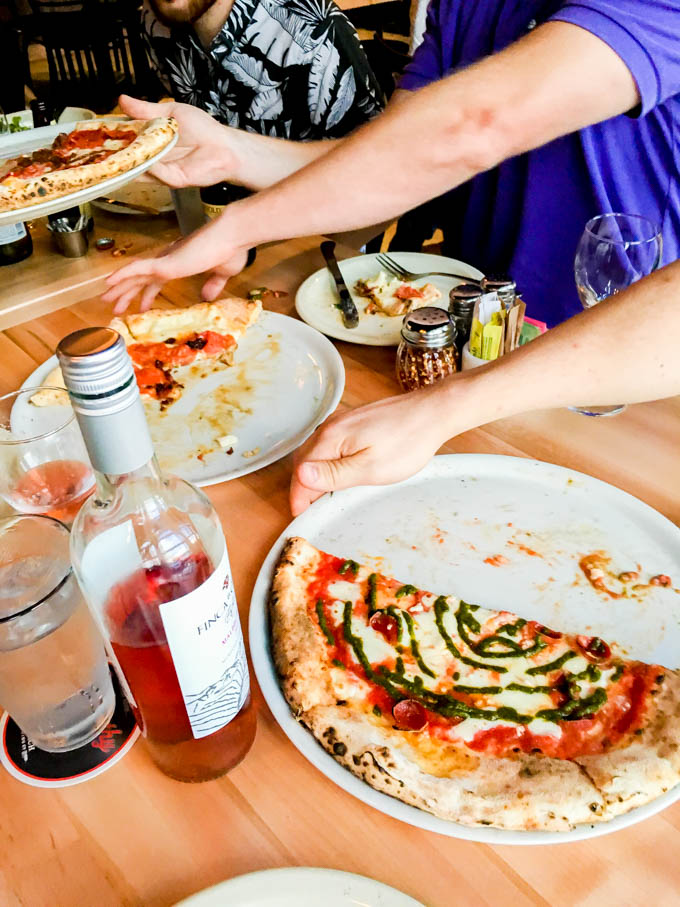 My favorite pizza was The Joan Marie, which had pepperoni, housemade mozzarella, goat cheese, roasted jalapeno pesto.  I loved it mostly because mini pepperonis are so cute. 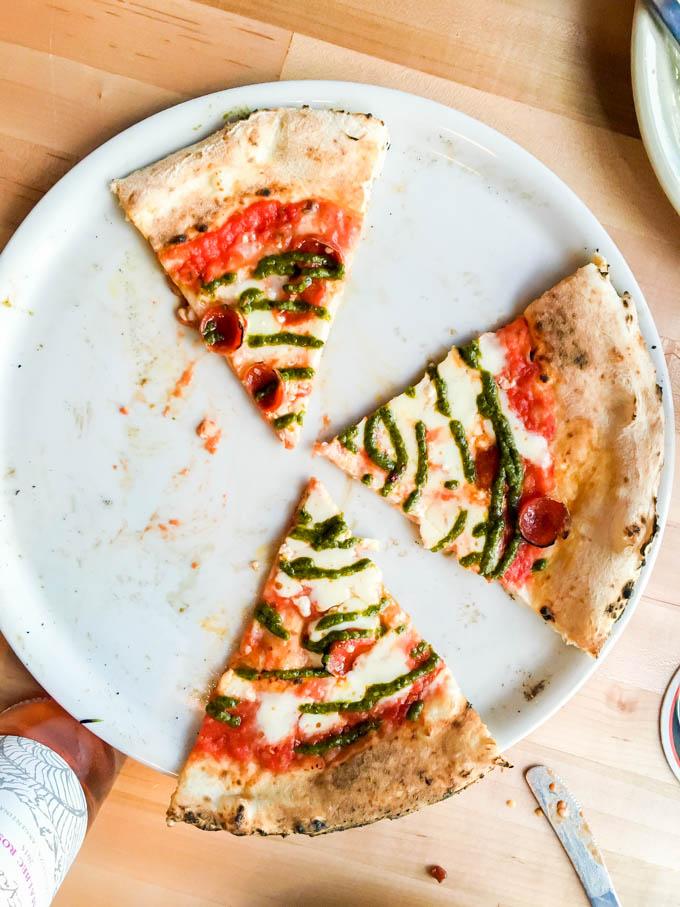 Liz (my friend at the end of the table) asked for pickled anchovies, which was such a delish salty addition to the pizzas.  Such a good call. 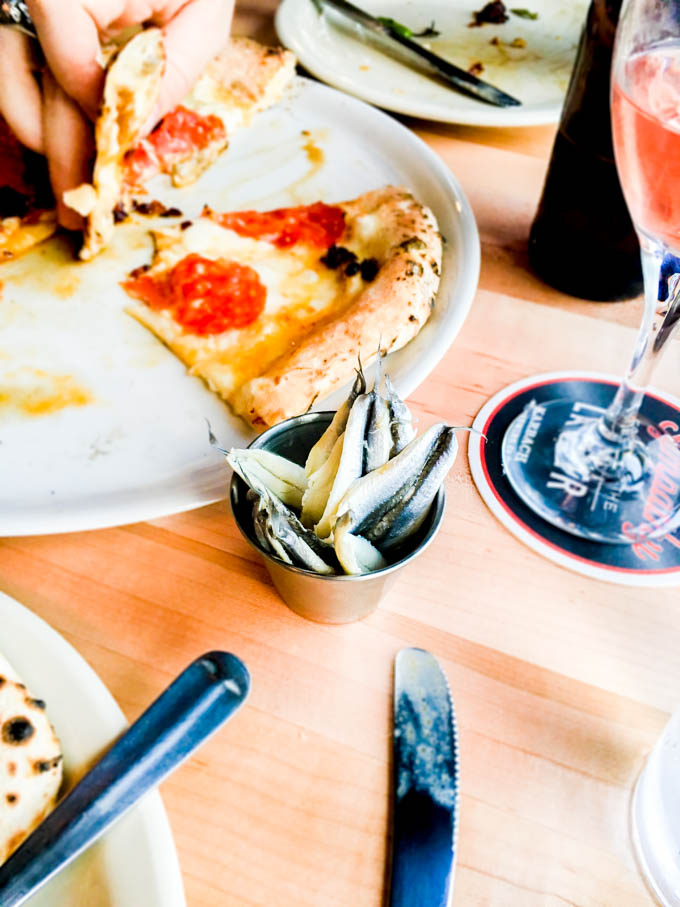 For dessert we ordered a couple desserts to sample.

My favorite was the s’mores calzone! 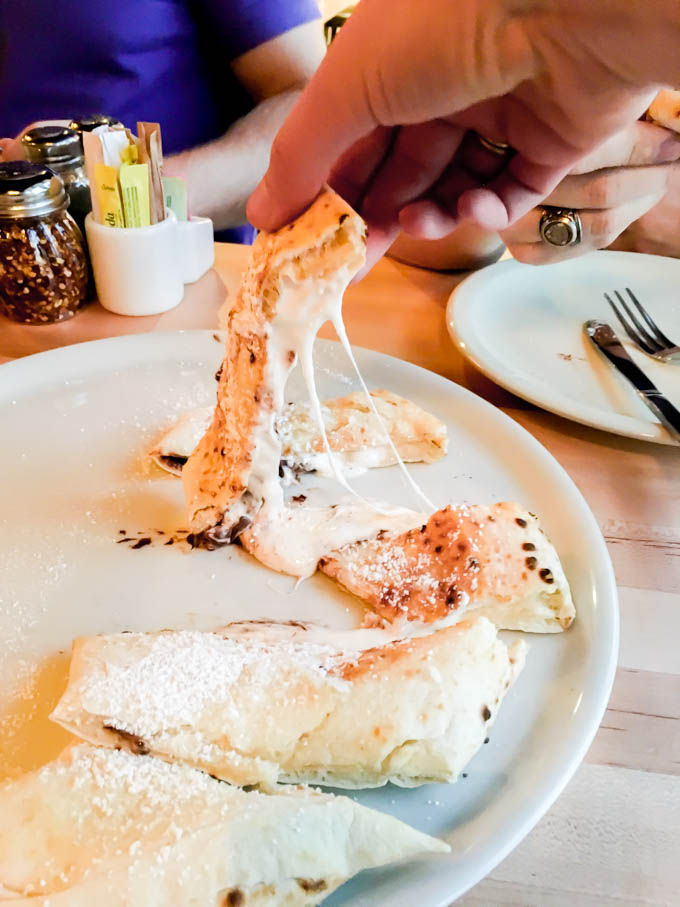 After dinner we ended up at Lei Low. 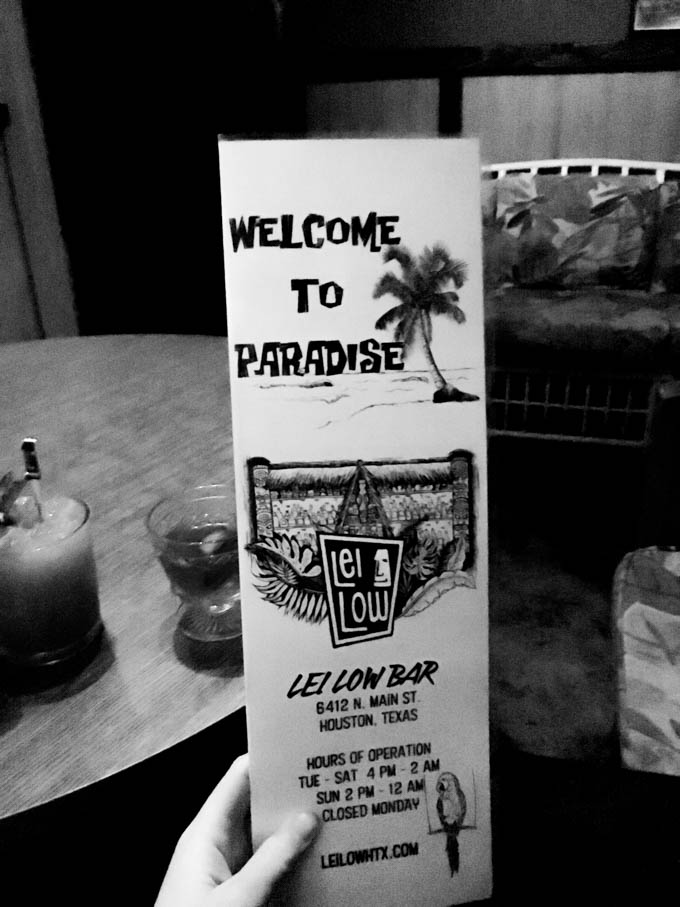 Which looks super sketch from the outside…but is really trendy and fun. 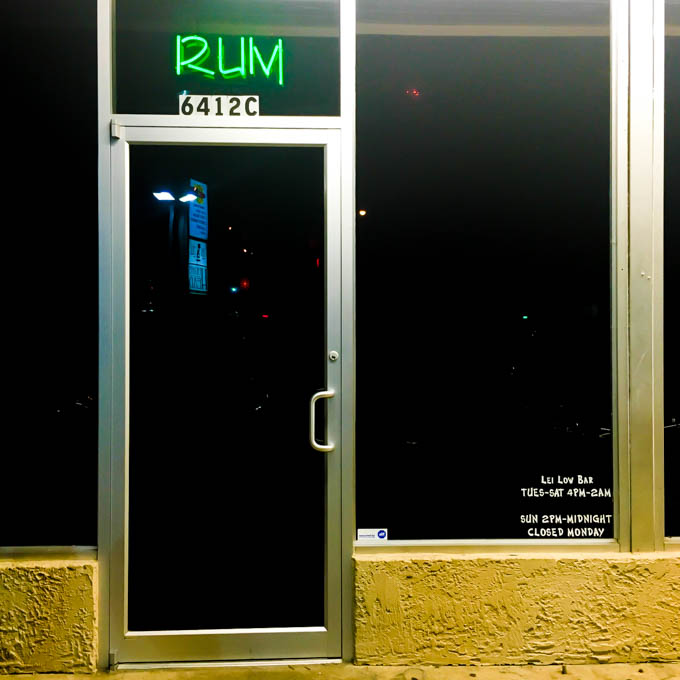 I got a Mai Tai, which brought back some Hawaii memories! (Part
1 and Part 2) 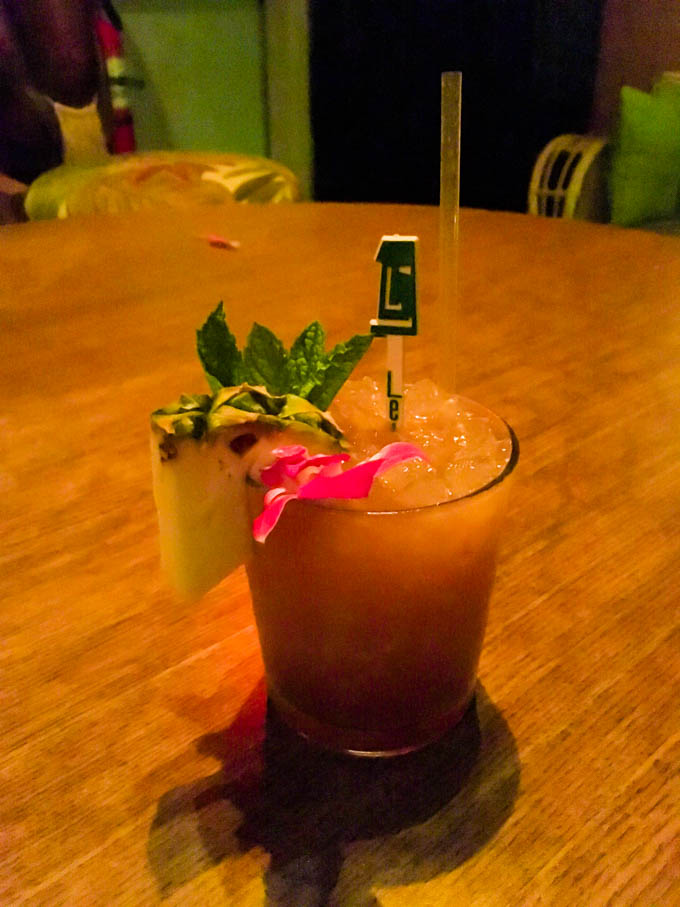 Me & my friend Amanda!

(pssst. she looks calm and sweet (and she is!), but she could kick your butt (and my butt) in a pull-up competition!) 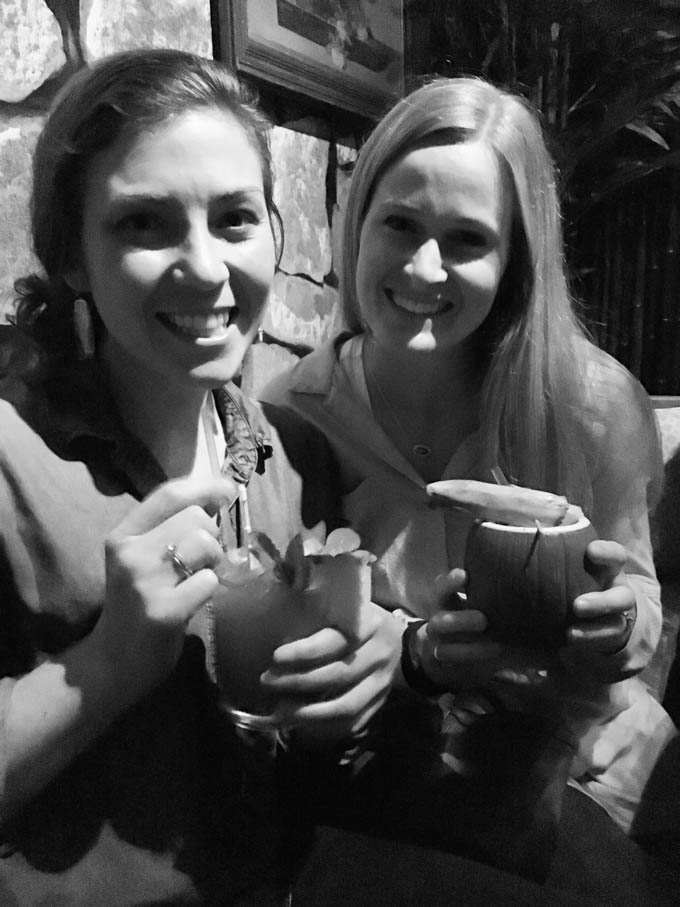 Saturday morning I got up and moved my body.

Then picked up a breakfast sandwich + latte for breakfast.  I was craving this pancake, but the electrician was at the house working on the kitchen and I didn’t want to slow him down with having to cook breakfast.

So a breakfast out it was.

For lunch I did a Chick-fil-a run for me, Andrew and our new electrician friend:)  I got a southwest grilled chicken salad. 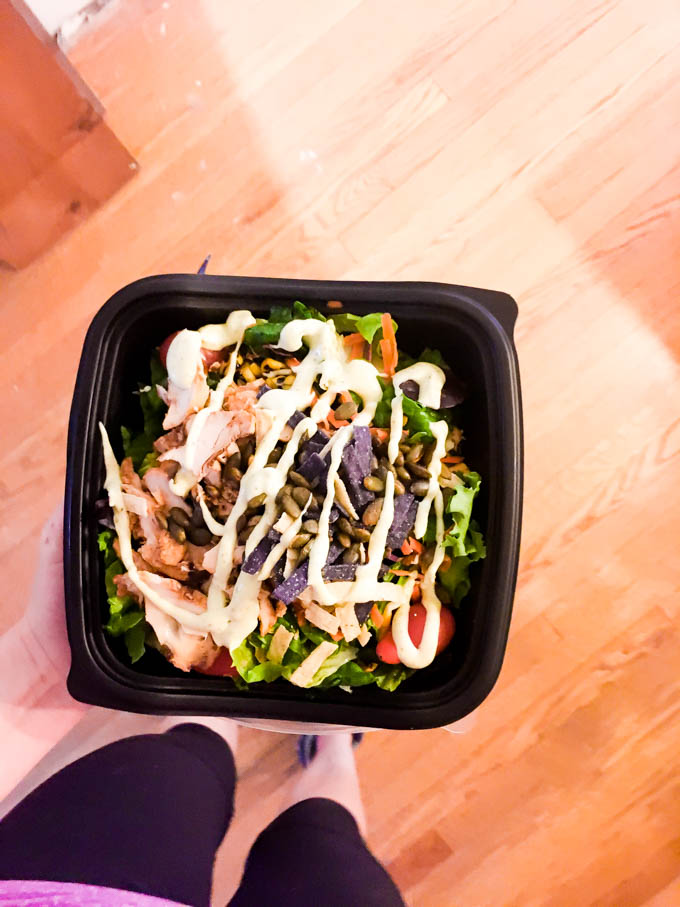 Later that day we headed a bit out of Houston to hangout with Andrew’s parents.  They just got back from Scotland and we got to hear all about it.  They spent a couple weeks hiking the West Highland Way.  It was cool to hear about.  You hike between 6-15 miles each day and magical trail fairies move your luggage from town to town as you progress.  They had a great time!

Andrew’s parents made us salmon + salad + potatoes.  Loved this dinner. 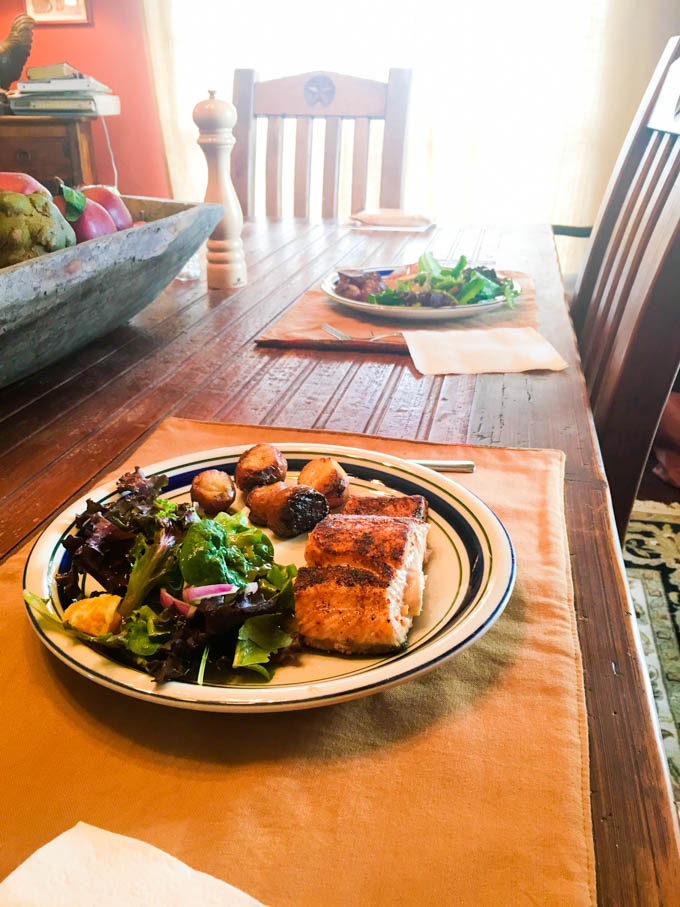 Eaten with this gorgeous sunset! 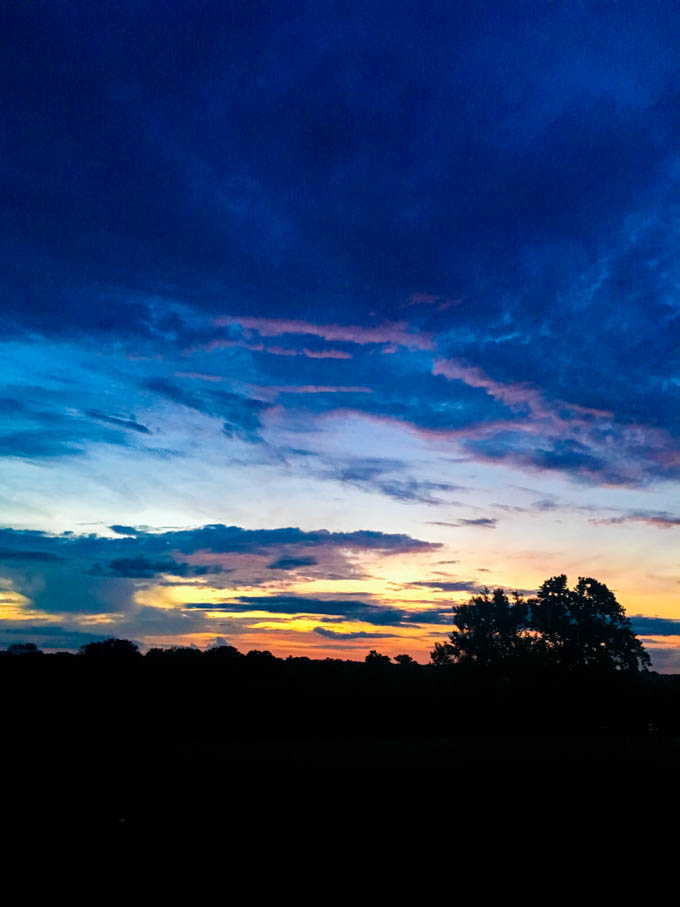 Brownie for dessert.  Served with fruit and sour cream mixed with brown sugar –> it’s a yummy fruit dip that Andrew has a zillion childhood memories of. 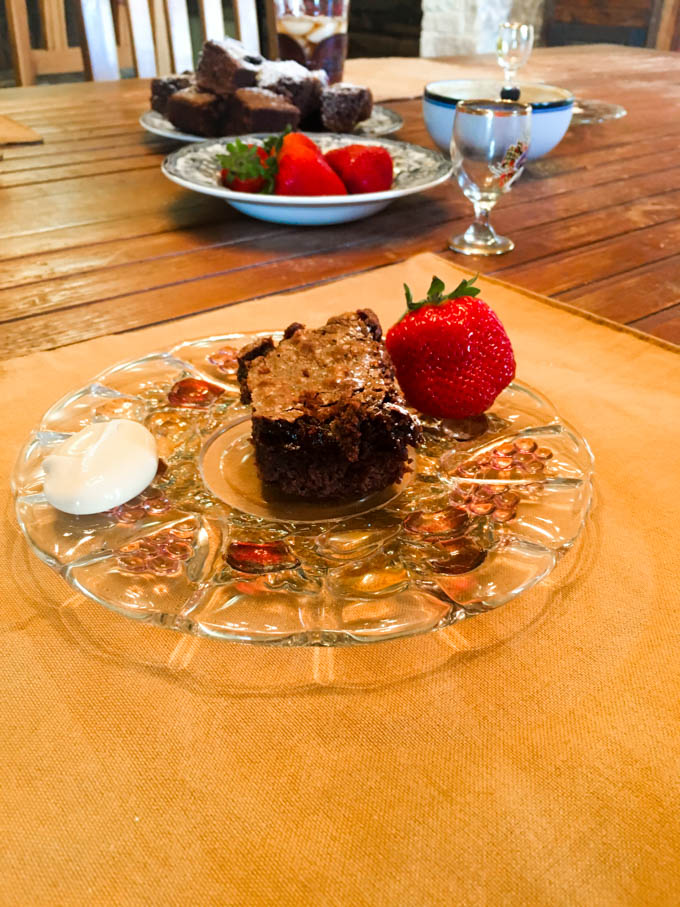 Then Andrew and his dad did a scotch tasting with some of the scotches he brought back from Scotland. 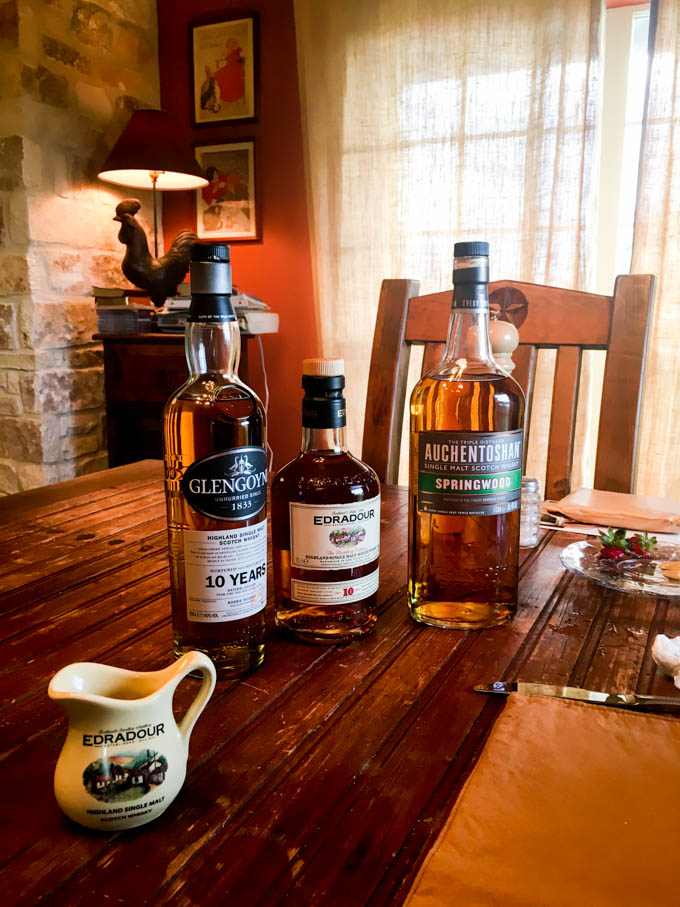 Sunday was spent finishing up recipe photo shoots for this week and next week (yum.), selling our old fridge on facebook, getting to go to church and grocery shopping.

Lunch was black bean tacos with guac, pickled onions, cilantro and crushed tortilla chips.  Looking back at this meal now, I’m kinda shocked that I didn’t add cheese! It must’ve slipped my mind! 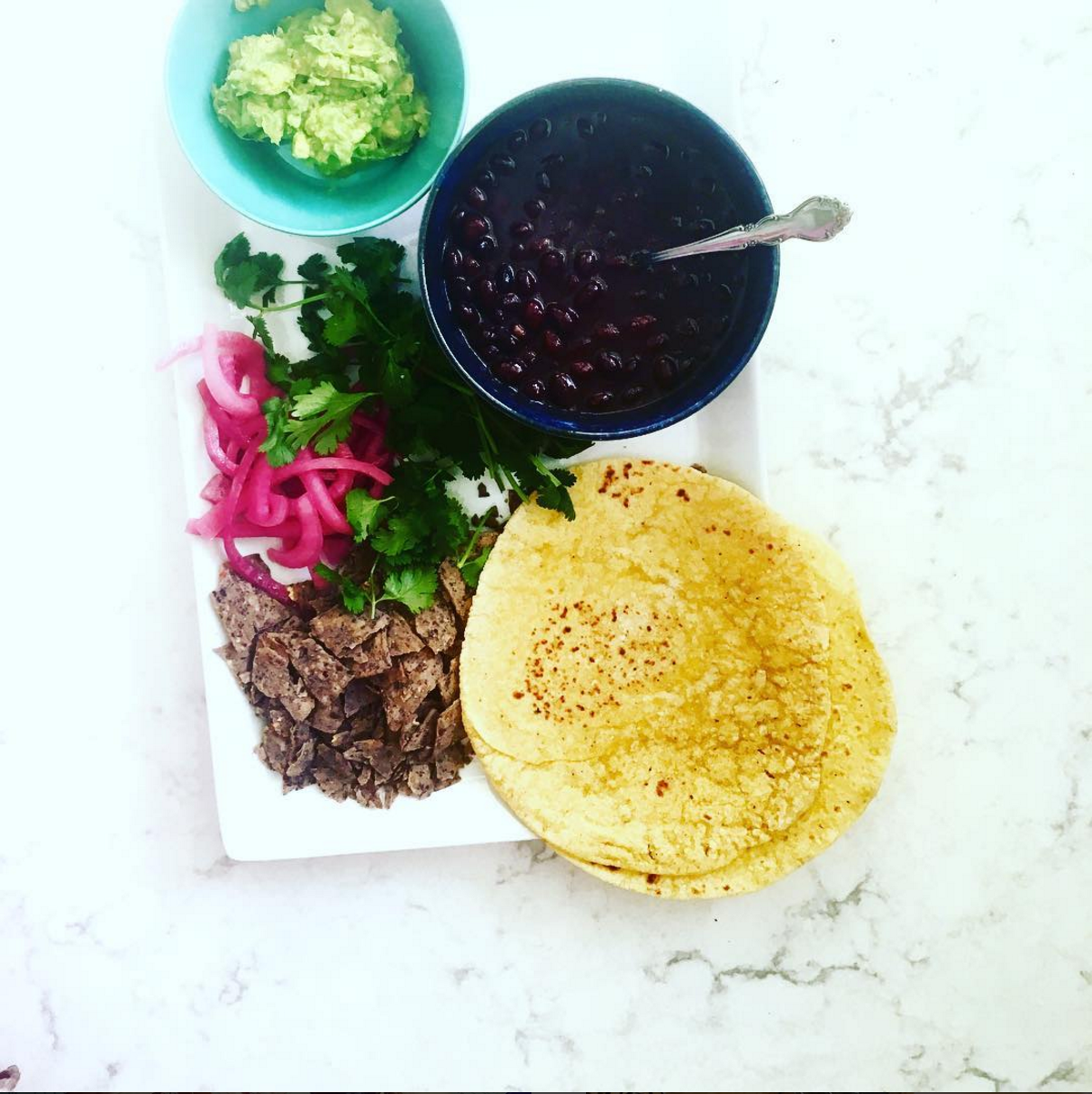 I really wanted to go for a bike ride Sunday afternoon/evening, but it wouldn’t stop raining.  Boo!

Later on for dinner we went to a diner called, Lola. 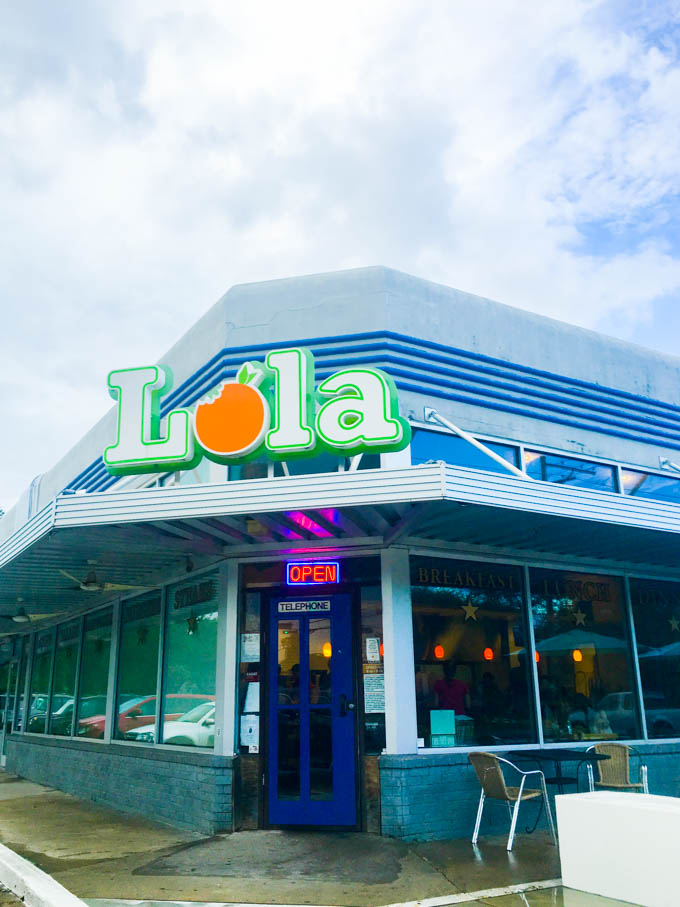 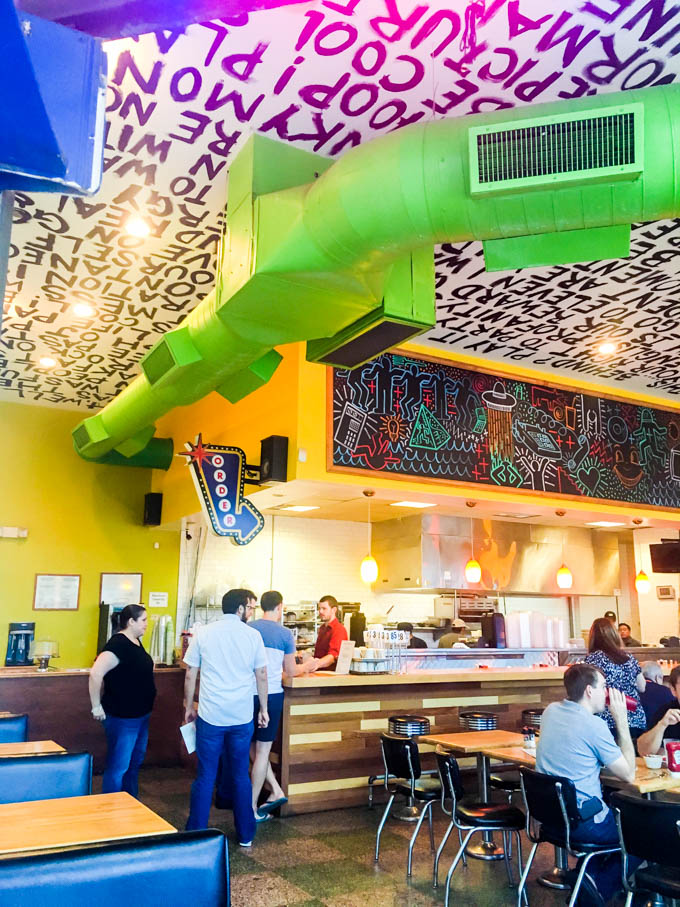 I got scrambled eggs + fried breakfast potatoes + sausage + wheat toast.  Andrew got chicken fried steak and he was SOOOO happy.  We don’t go to diners much!

I like brunch, but diners are different and I don’t really get that excited for them.  There was one place we went to when Andrew was in college in Colorado called Snooze that I thought was fun.  But that’s less diner-y and more brunch-y.  AND in more exciting news, Houston is getting a Snooze!  Their tagline is “an AM eatery”.  Don’t you just love that? I do. 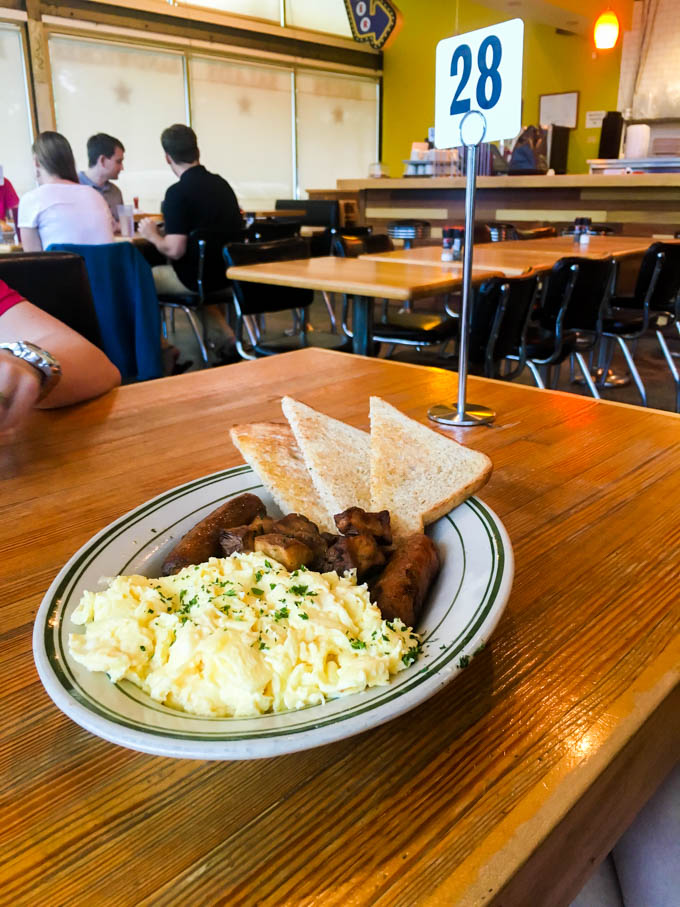 I’m feeling a bit anxious about this upcoming week for a number of reasons that I am going to try and go journal about.

Things that I’m not anxious about and am just super excited about –> I have a morning date with a friend on Thursday, soaked oats are in the fridge waiting for me for breakfast, AND it’s my birthday week! I don’t have any actual plans for my birthDAY, but Andrew and I are going on a bday trip this weekend.  It’s always nice to get out of town.  And it’s always nice to come home again:)

I love hearing about your weekend/your life!  Would love to know what was the best part of your weekend and/or how you plan to take care of yourself this week! 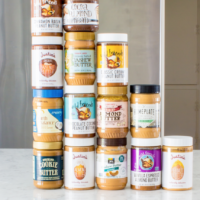 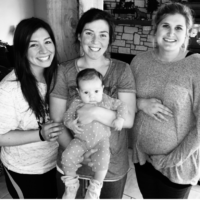 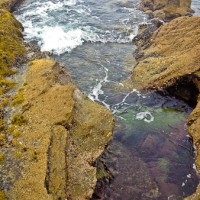