We had the MOST AMAZING weather in Houston this weekend, so we tried to spend as much time outside as possible.

Saturday we got up and I decided I was craving cinnamon rolls.  I went with my pancake cinnamon rolls and shared the recipe on Stories.  While there are some mixed reviews on that recipe post, I really love these cinnamon rolls.  The key is taking them out of the oven WAY before you think they are done. 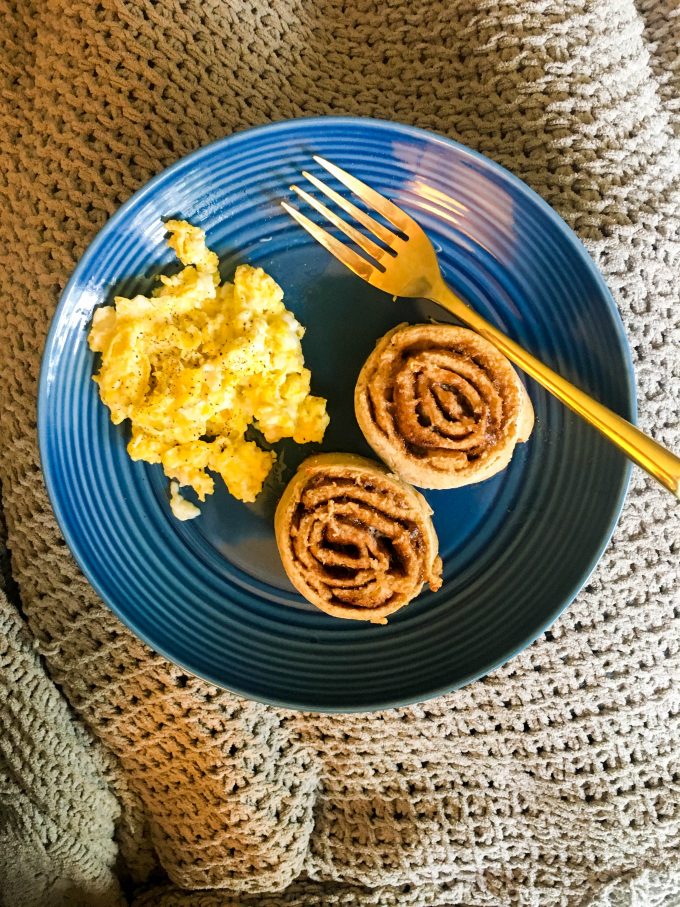 Later in the morning I went and tried out an Infinite swimming pool for the first time.  It was really neat.  I have been missing swimming lately and there aren’t a ton of pool options for me to choose from.  Swimming is one of the few movements that doesn’t make my knees feel like death.  Yay.

After swimming I swung by Chick-fil-a and picked Andrew and I up lunch.  I forgot to take a photo (so I used a recycled photo below).  I got the Cobb Salad (love that thing) sans fries this time.  I’ve found if you dress the salad with their avocado ranch dressing and BBQ sauce it is SOOO delicious. 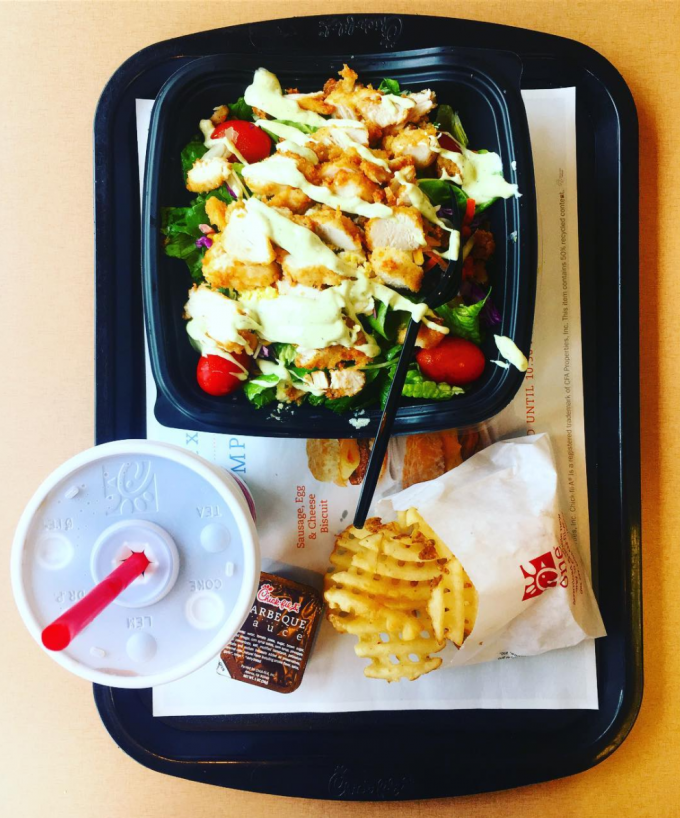 After lunch I painted a frame gray for my office. 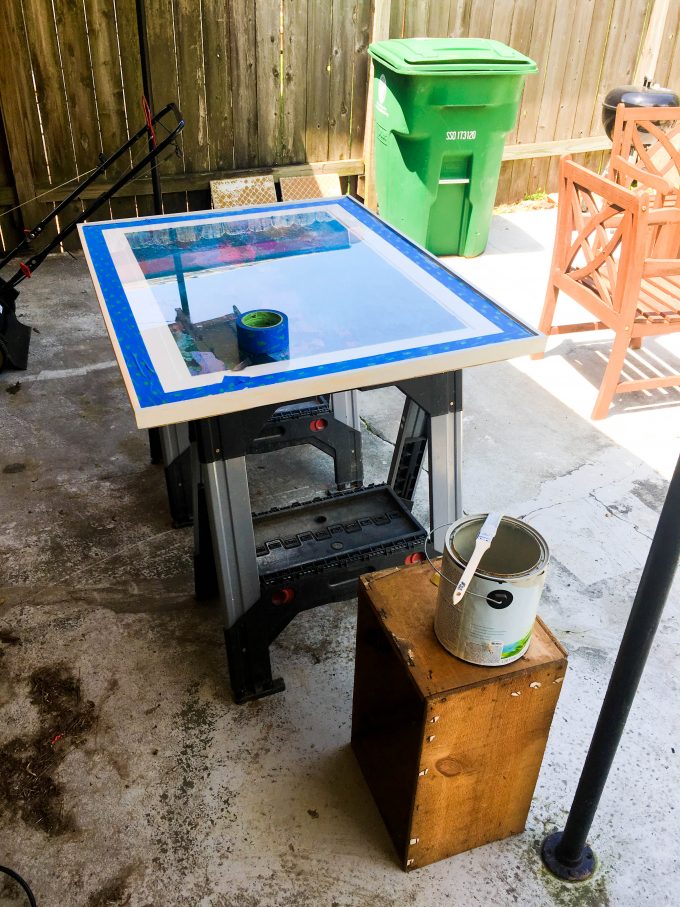 Later than afternoon we met our close friends at Kirby Ice House, a local bier garten.  I had a couple grapefruit juice drinks :) We love them and their pup, Cooper, so much! 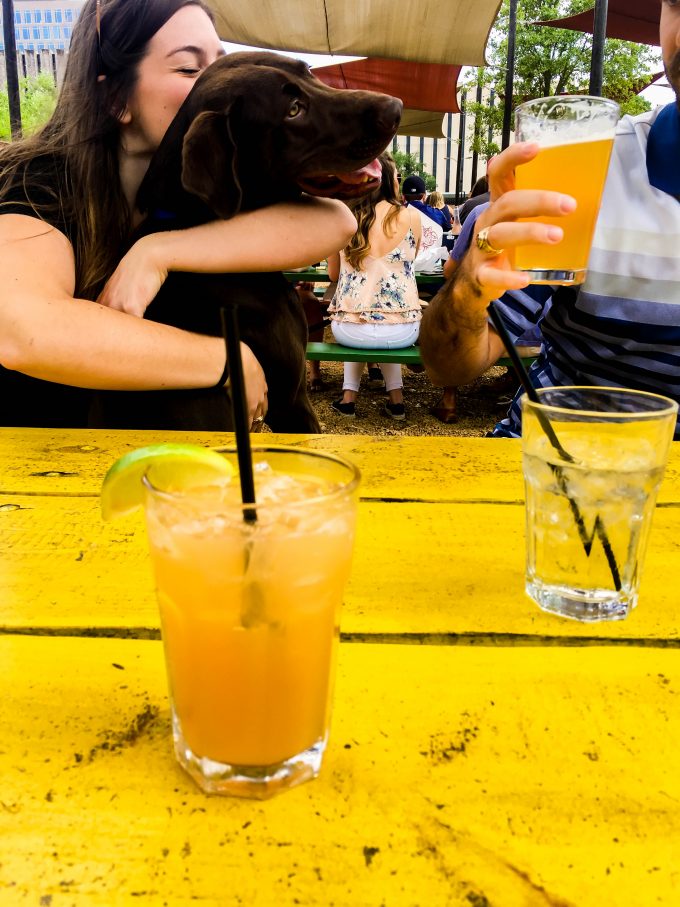 After hanging out for several hours I wanted a donut, so Andrew and I hit up Shipley’s for my favorite donut on Earth.  Shipley’s glazed blueberry cake donut is AMAZING. 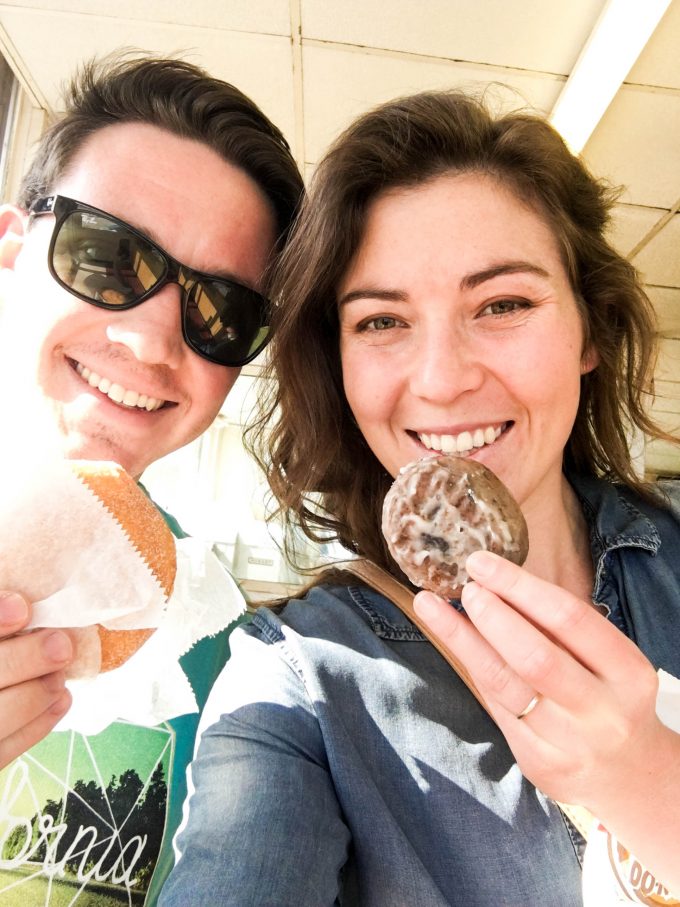 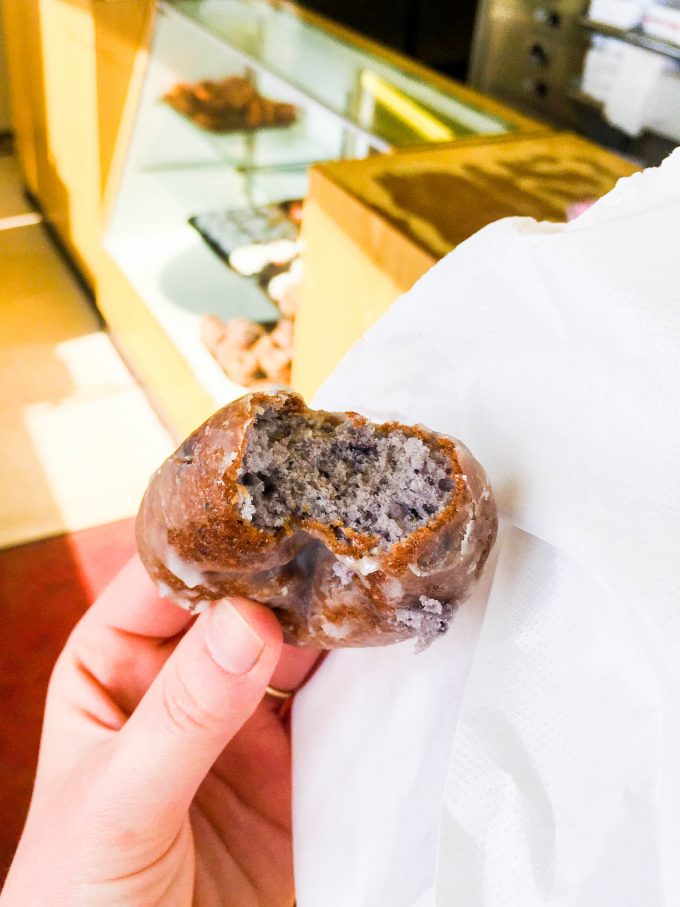 For dinner we did leftover pizza + salad. 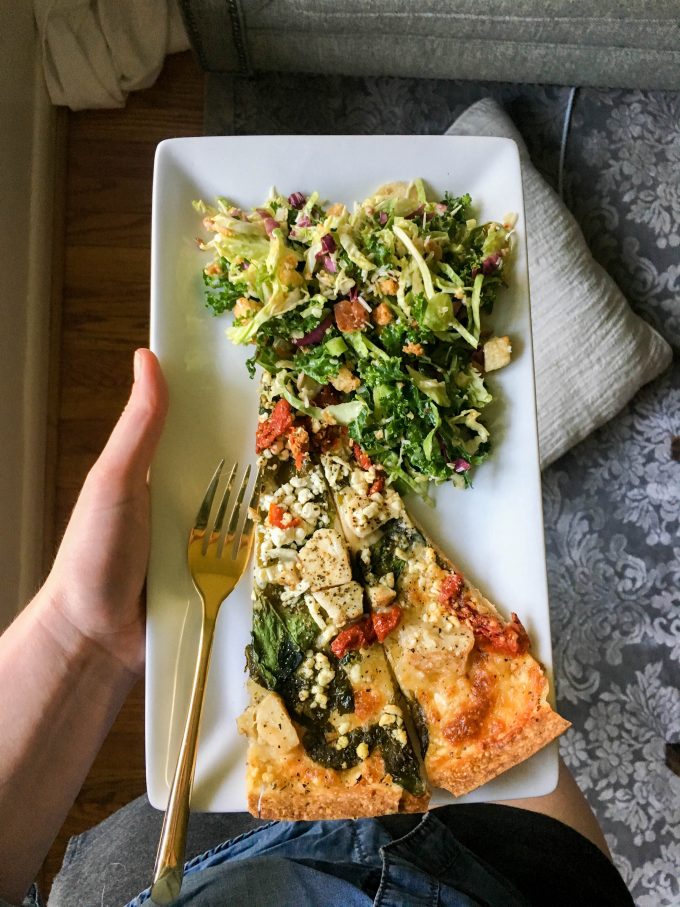 I’m a snack before bed kinda person.  So I’m sure I had an after dinner snack, but I can’t remember what it was.

Sunday we woke up and we both felt SO rested.  It was a magical 55º outside and the inside temperature was 68º.  I think the cold helped us both sleep.  We typical go to church Sunday morning, but with the weather sooo incredible I was craving a slow breakfast date outside.  Our church records their sermons, so if you miss going in person on a Sunday it’s easy to listen later.  So that’ll happen later this week.

For breakfast we headed to Sweet Paris! One of my fave Houston restaurants and one of Andrew’s it’s-just-alright-but-i-know-you-like-it-so-we-can-go restaurants lol. 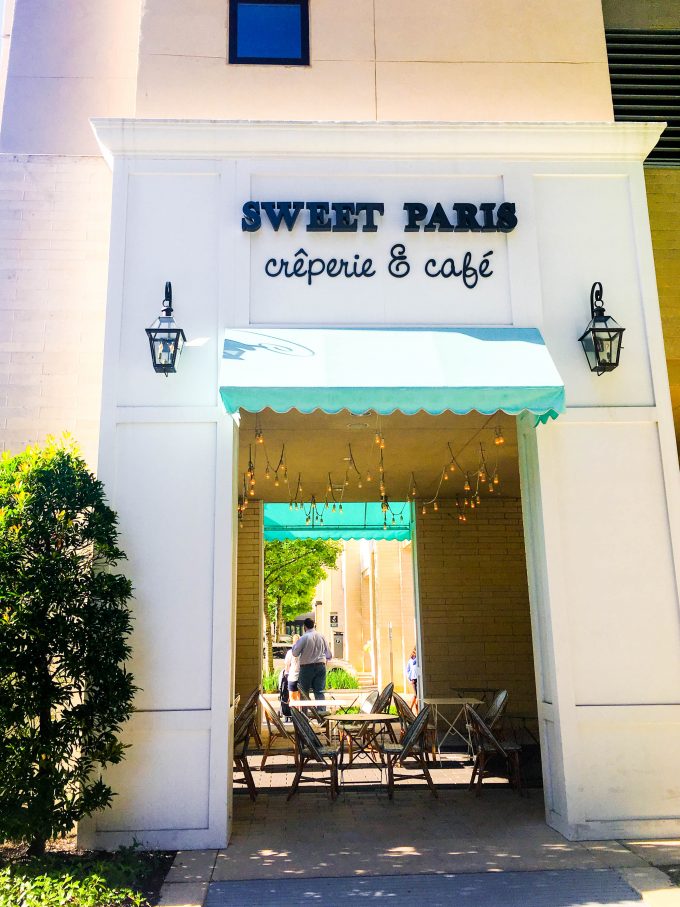 Look at all those bananas lol 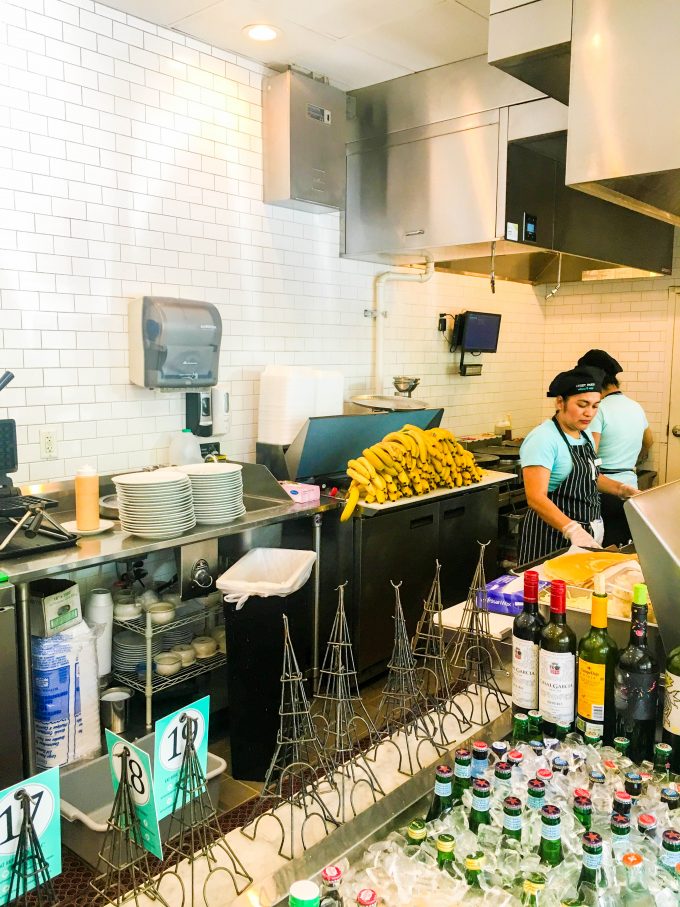 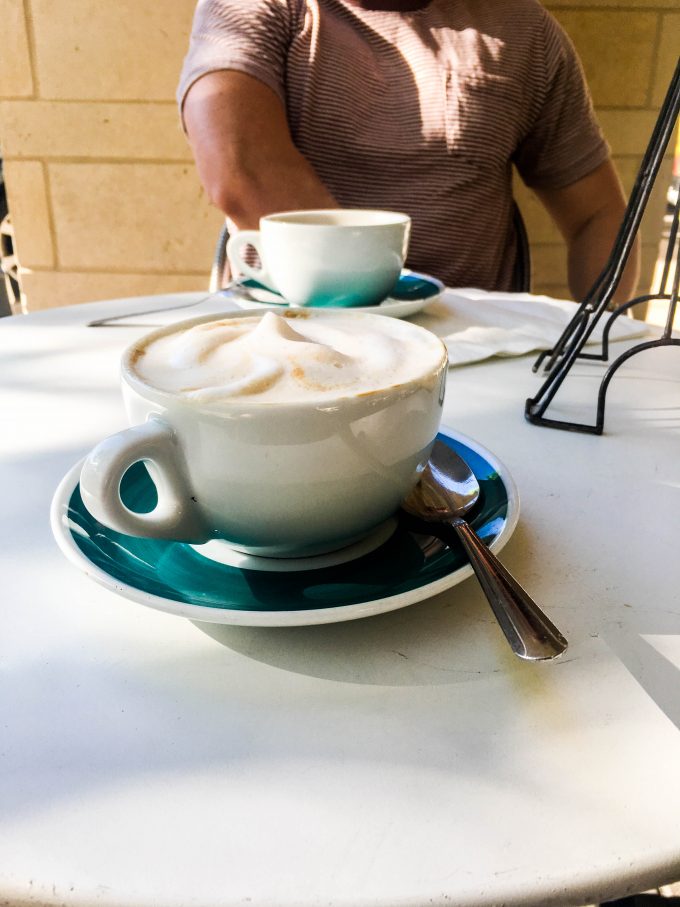 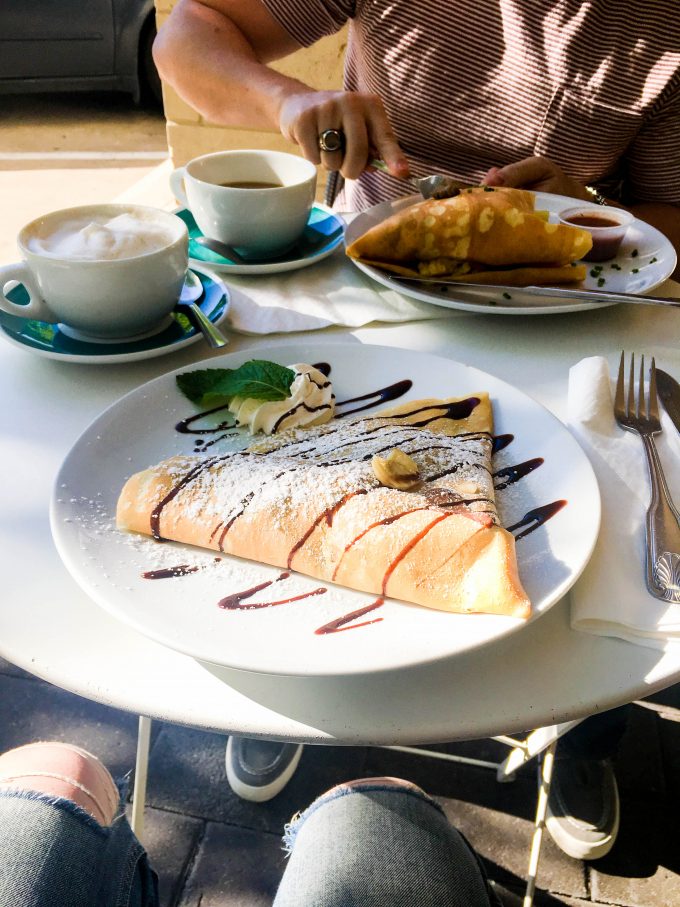 After crepes we got the grocery shopping for the week done. 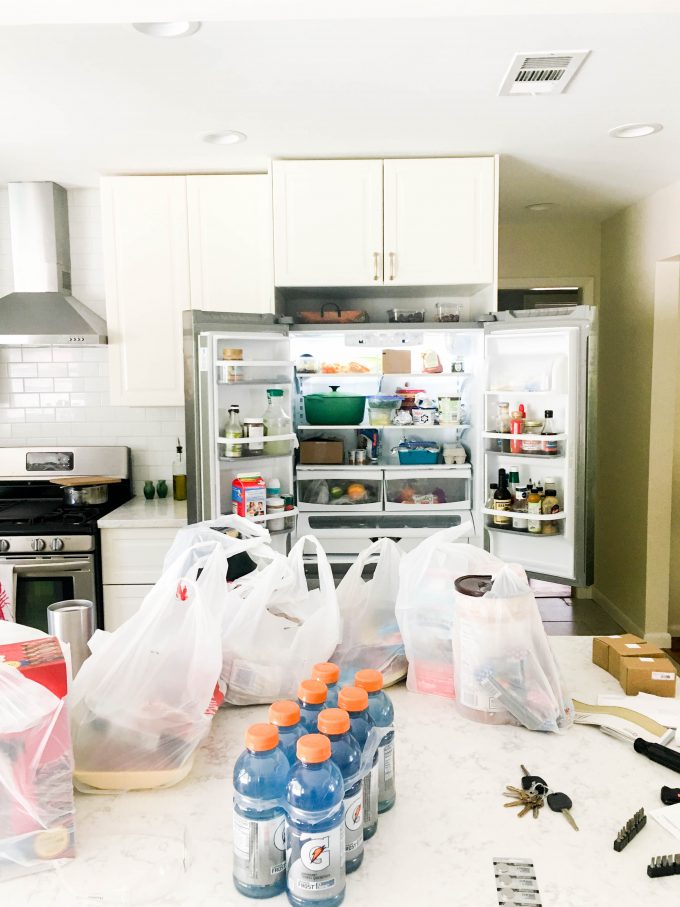 The fridge was a mess, so I took some time throwing out old stuff and cleaning the shelves. 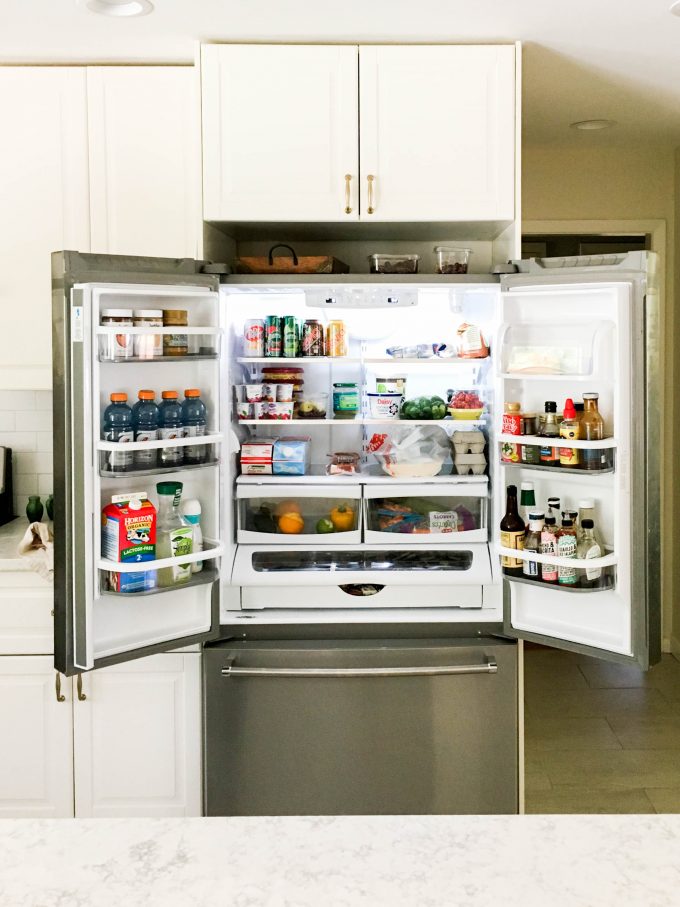 For lunch I made cracker nachos (no idea.  it just sounded good) + an orange. 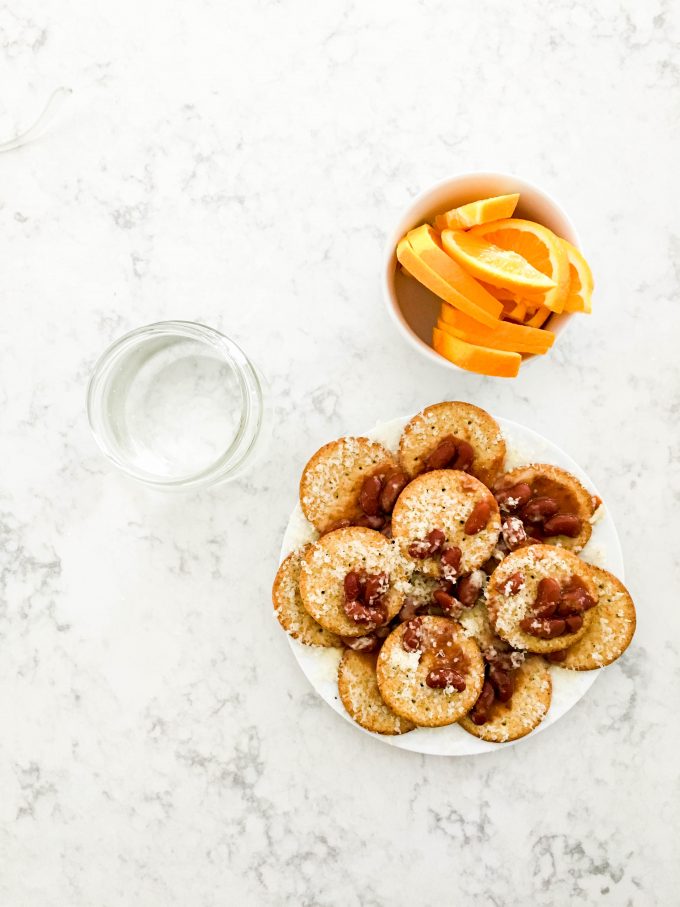 Then I went shopping! I had been wanting some new clothes, especially shorts for summer.  I found scalloped jean shorts I’m in love with and overalls and some palm leaf stretchy pants.  I so wanna do the capsule closet thing.  I think it would help me.  Gonna see if I can organize my closet soon into some resemblance of a capsule closet. 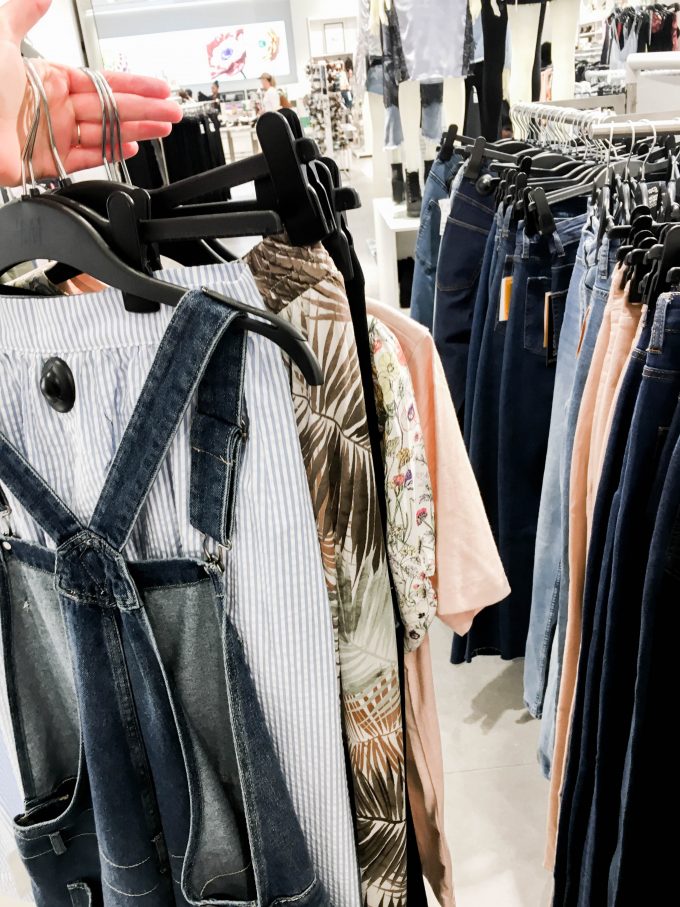 AND I had been wanting some slides like these! 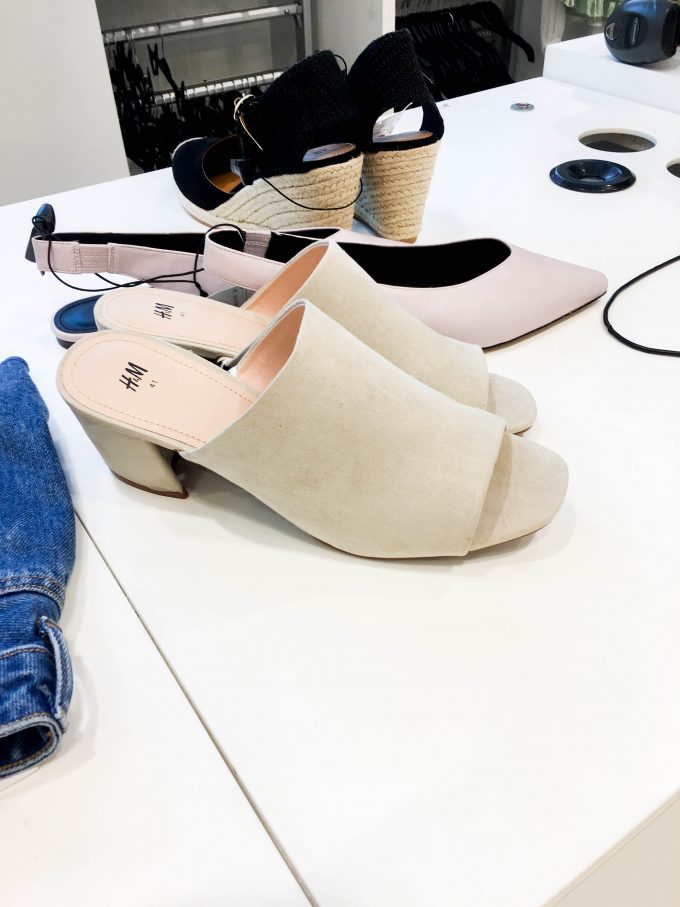 I spent the rest of the afternoon…

1. performing surgery on Maggie’s toy, which we’ve nicknamed ‘Kazoo.’  She ripped a hole in it under his chin (i think she was going for the jugular…if birds/chickens have jugulars haha) and has been de-fluffing it slowly.  This is the only toy she has ever had that she hasn’t destroyed in a week.  My mom gave this one to her in her Christmas stocking and I can’t believe he’s still around.  She loves the thing.  So I stitched up the hole.  I have no idea how to sew.  I basically just tied a bunch of knots.  We’ll see how it goes.

Kazoo is also in desperate need of a bath, but I don’t think my stitches would survive that. 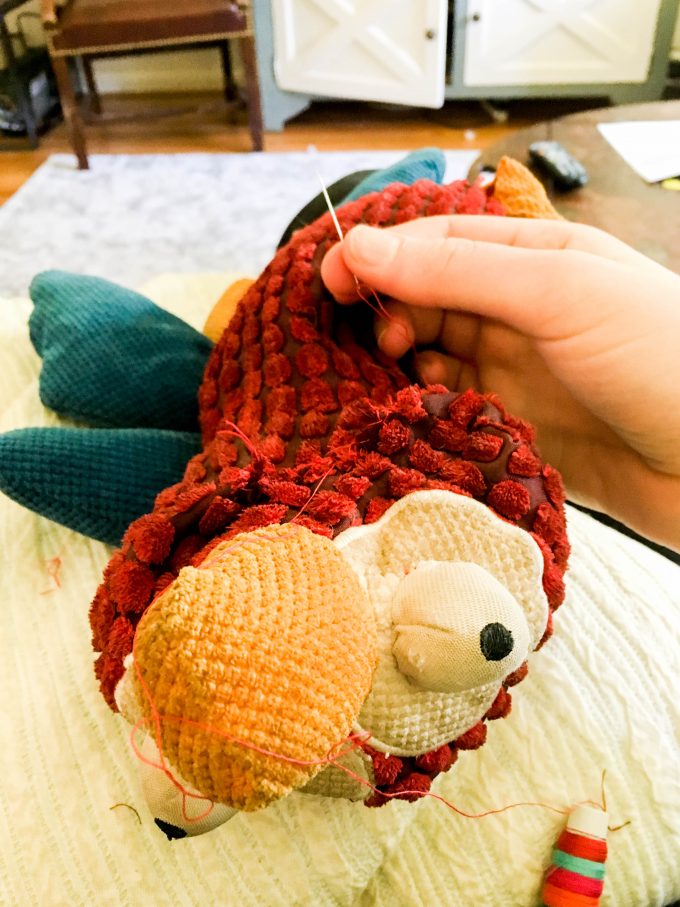 2. Playing my favorite game of “find the prettiest new build in the neighborhood”.  I was leisurely riding around on my bike (anything above my bike’s lowest gear hurts my knees so it is a lovely leisurely pace) and found this house being built.  Our neighbors build the coolest homes.  This one has a red tile roof and a courtyard and is way more gigantic than Andrew and I ever picture ourselves in.  It’s still cool though. 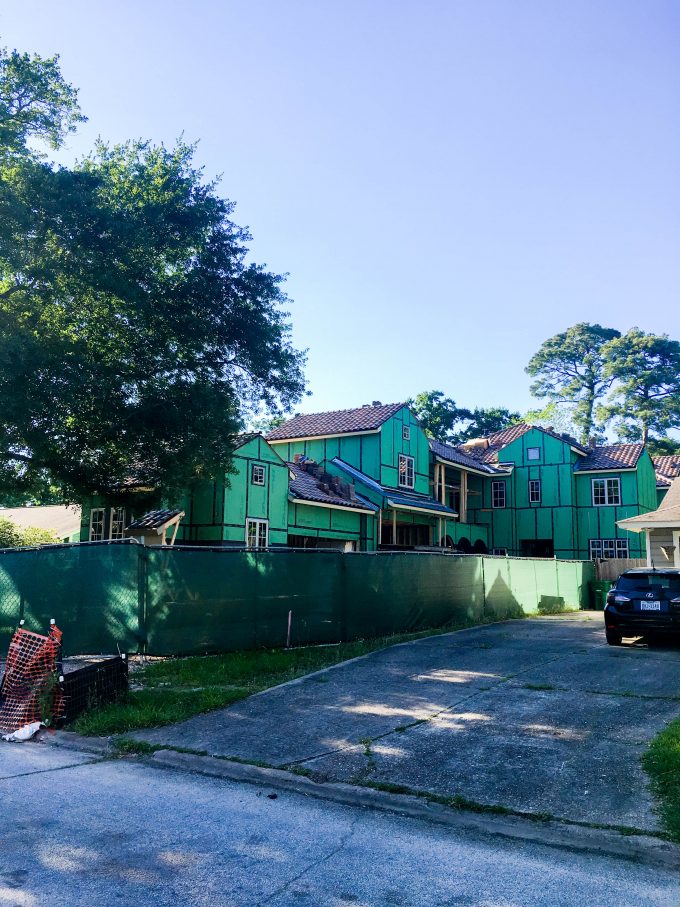 3. Spent time with my heating pad and my knees… 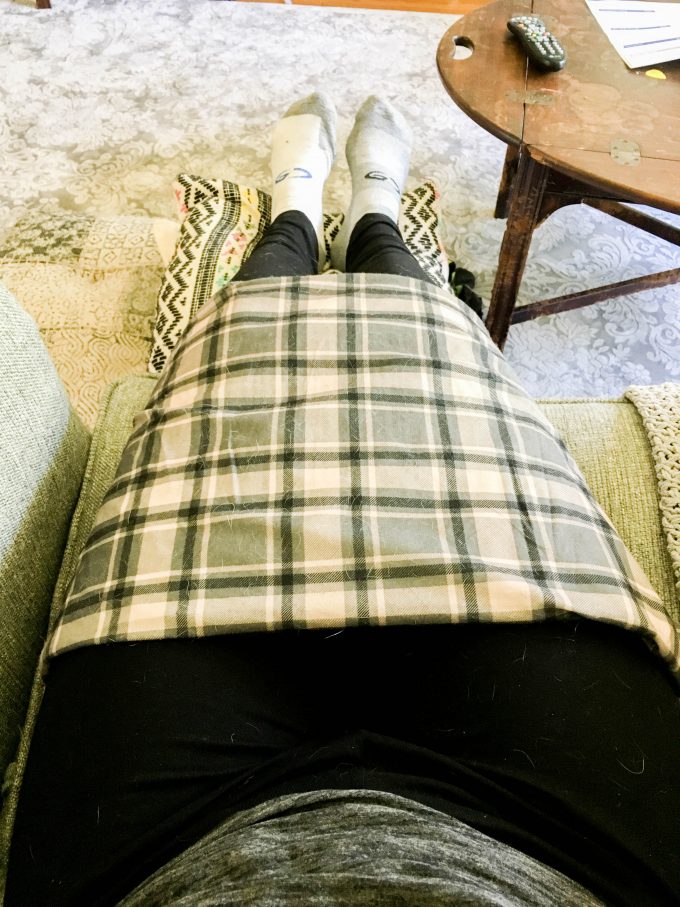 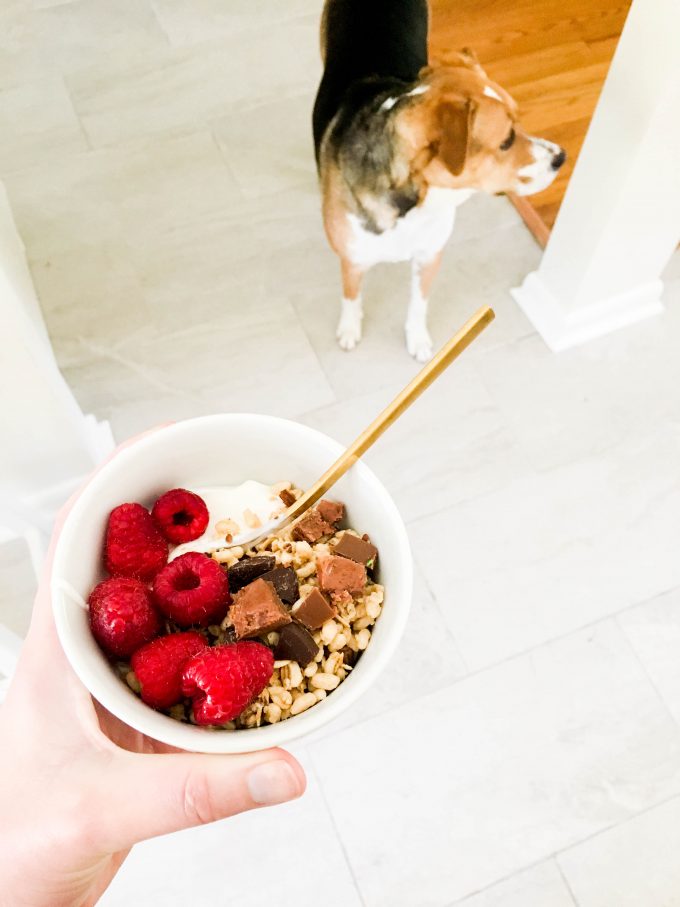 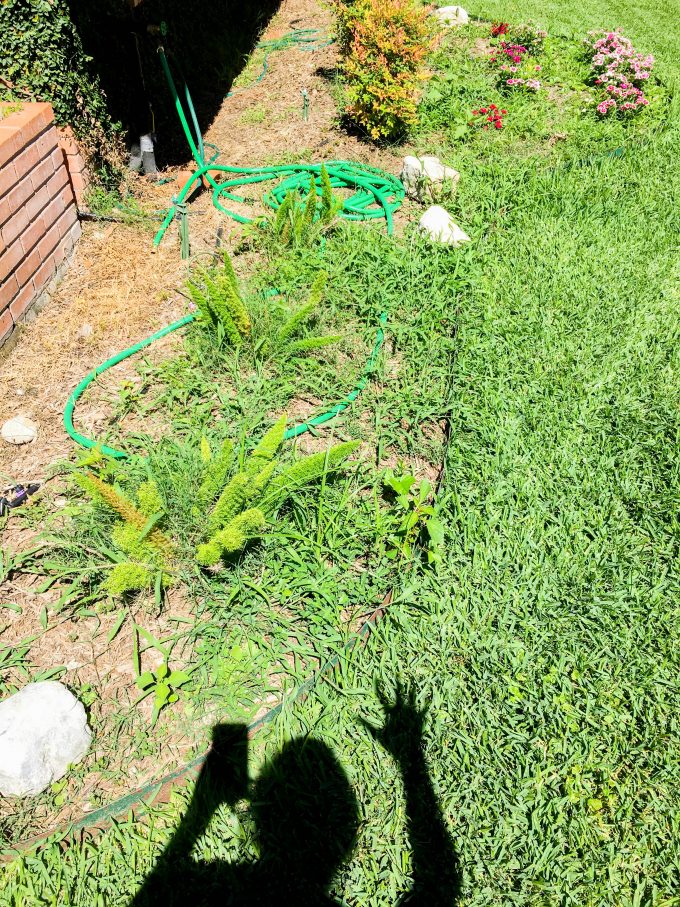 6.  And painted a hippo.  Before I wrote “hippo” on the bottom I asked Andrew, “what do you think this animal is?” And he had no idea lol. 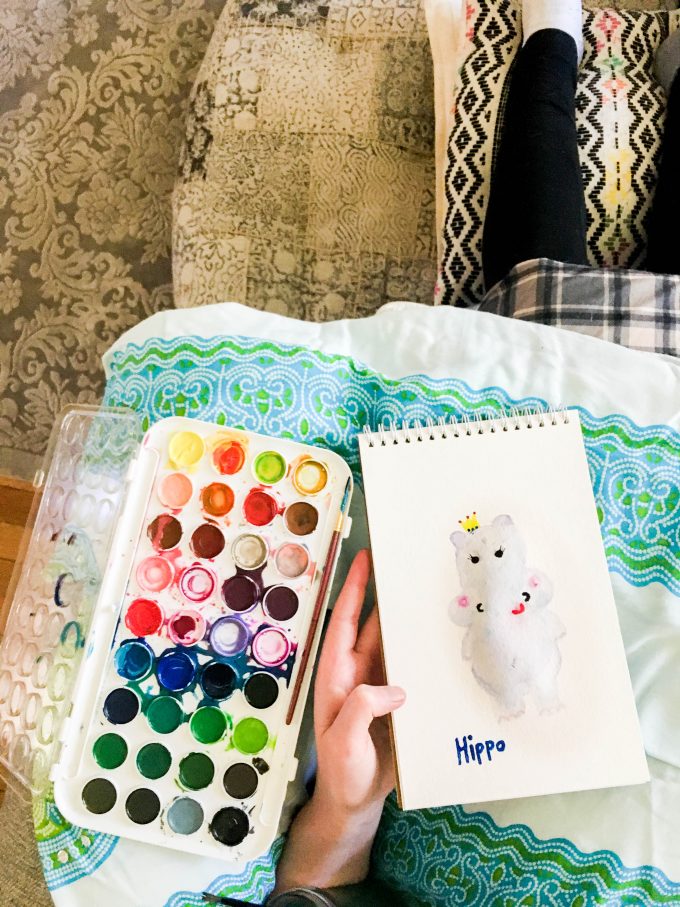 Andrew grilled for us for dinner.  And it was fabulous.  I’ll be sharing a “meals lately” post later this week (I haven’t done one of those in forever!!).  So our last night dinner will be featured there. 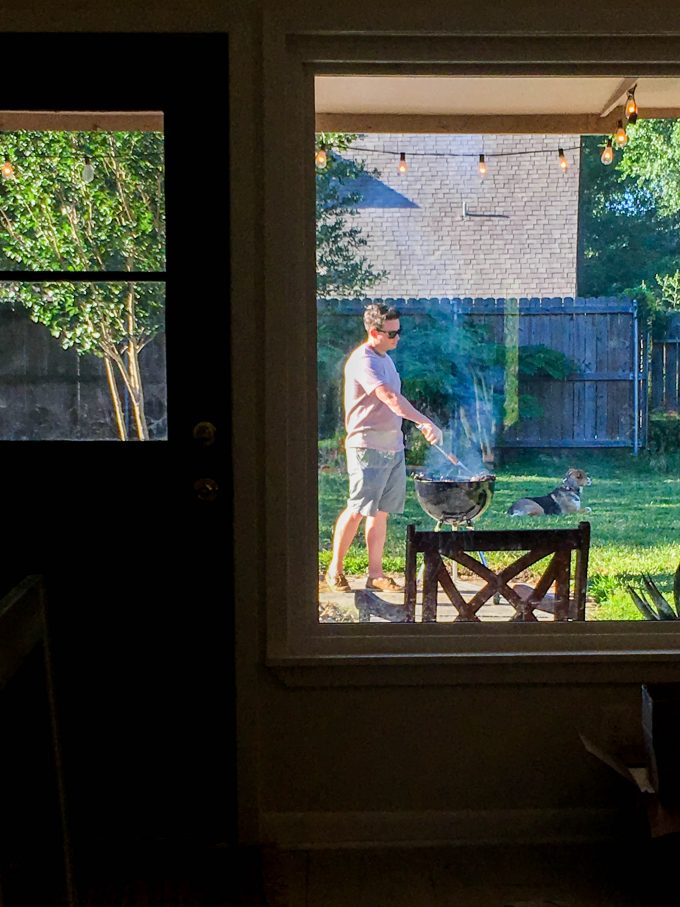 My last weekend highlight was listening to a good portion of this book throughout the weekend.  I’m a fan.  I wouldn’t recommend it for those in early ED recovery, as your ED may misconstrue and misuse the information. 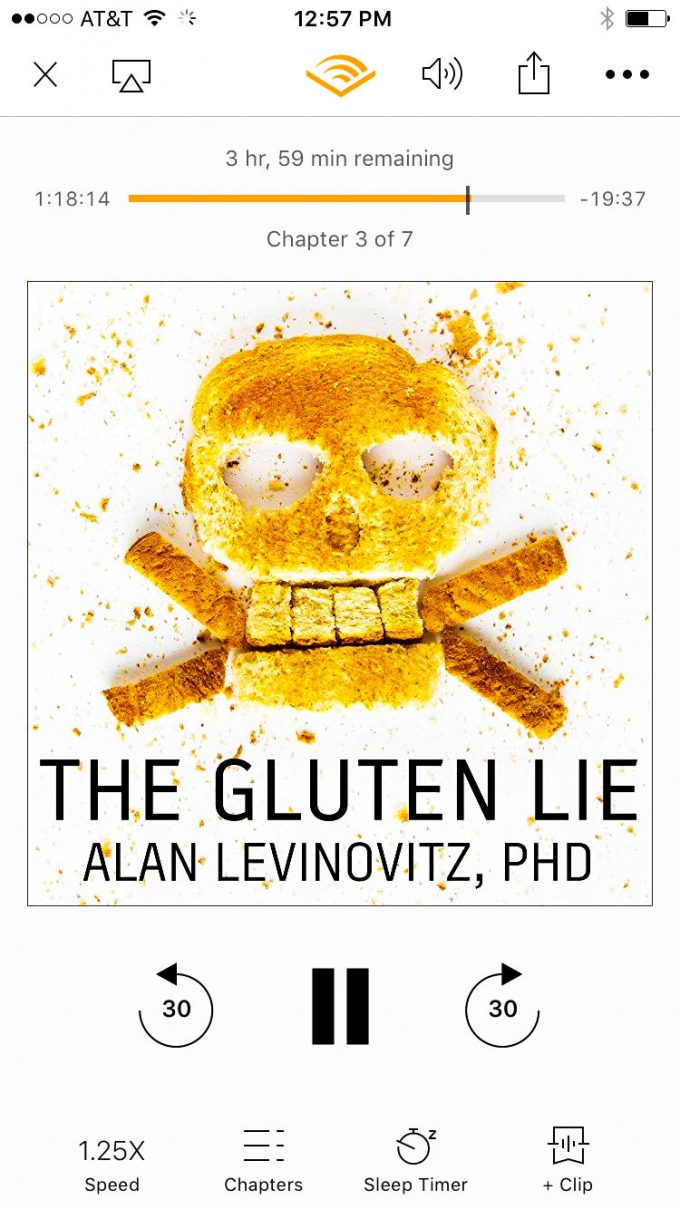 What were your weekend highlights? I’d love to hear:) 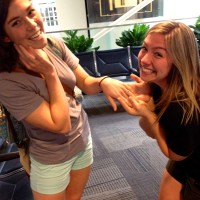 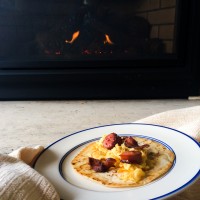 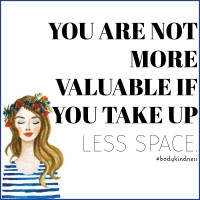