posted by Kylie in Breakfast \\
56 comments »

THIRTY minutes! That means you could make these before you leave for work. 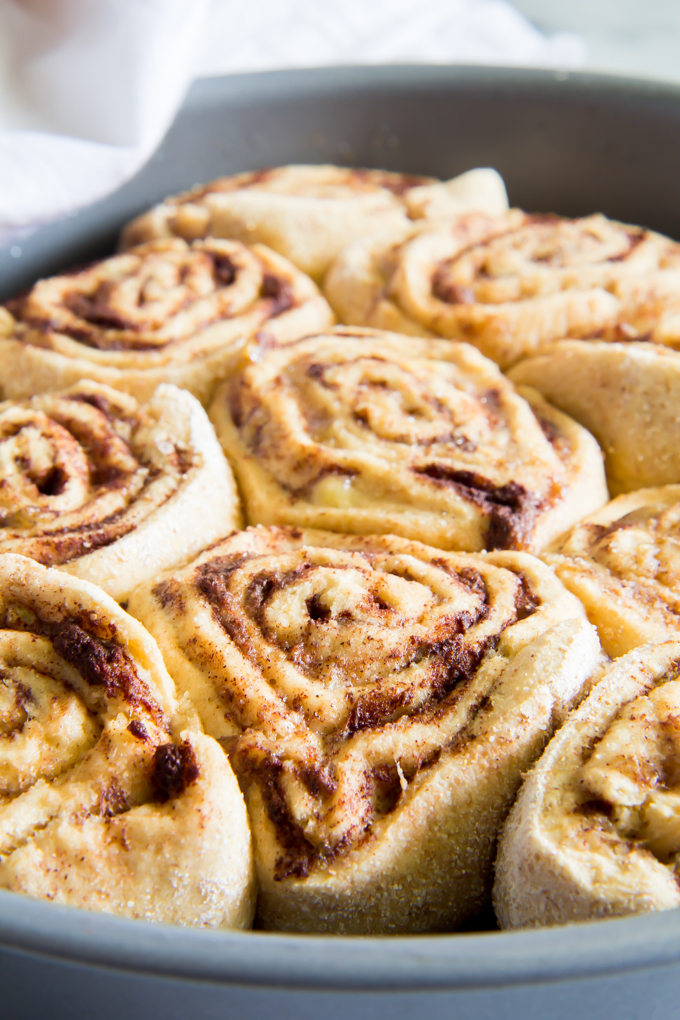 Unless you’re reading this post at work…in which case you can make these tomorrow before you leave for work.

Now I have small batch cinnamon rolls recipes here, here and here.  But sharing is good, so we need something bigger than a small batch.  We needed a normal sized batch.  So here we are. 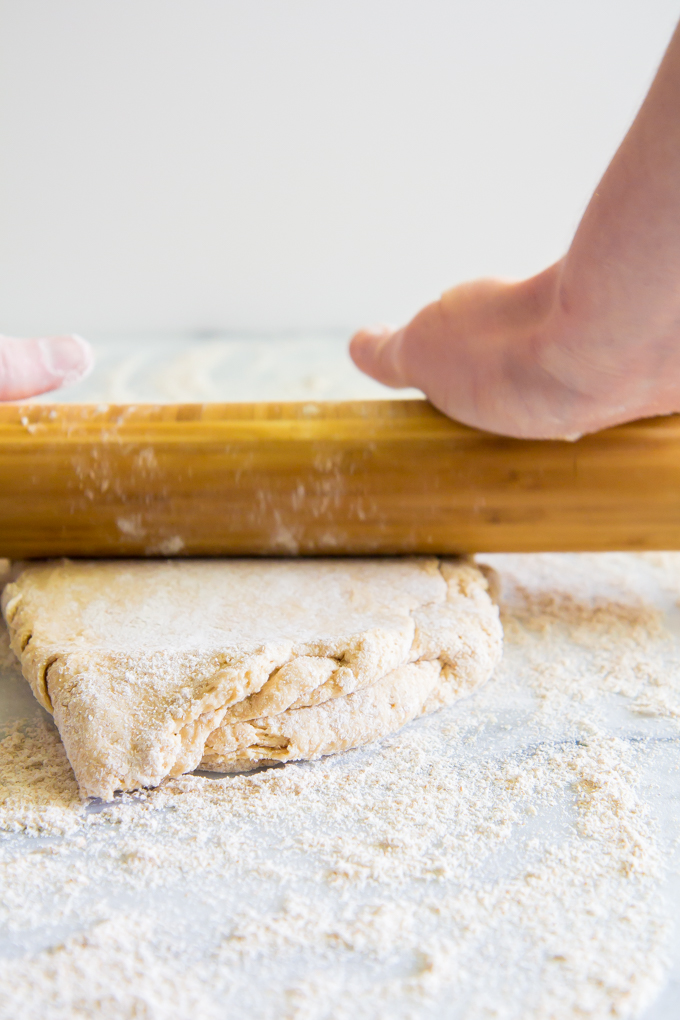 My one problem with ordering cinnamon rolls when I’m out is that they are never ooey, gooey enough for my liking.

I want my cinnamon rolls rare.

I mean, like barely baked.  There’s this food truck in Houston that sells coffee and cinnamon rolls.  And that’s like it.  Have any of my Houston people tried it?  I have every intention of trying it, especially if I can talk someone into giving me one of the middle ones. 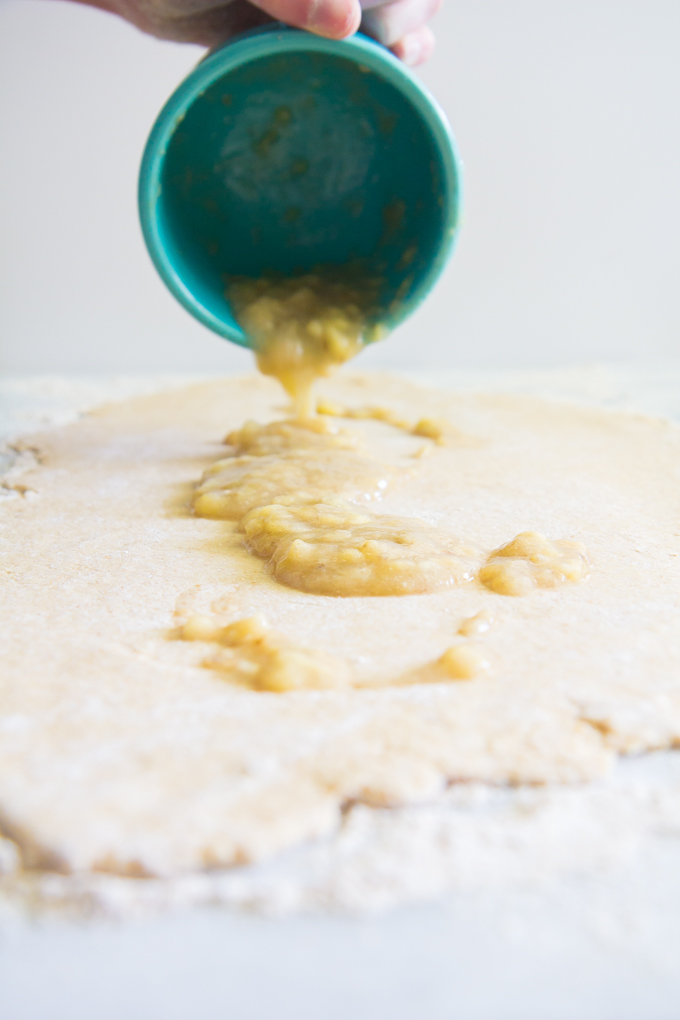 Somewhere in the midst of life I’ve developed quite the liking for iced coffee paired with baked goods.  On a weekend morning (or a random Monday, Tuesday, Wednesday, Thursday or Friday morning), there is nothing I want more than a warm cinnamon roll or almond croissant (preferably a cinnamon roll stuffed with almond paste) paired with a tall glass of milky iced coffee.

I have this ridiculous thing I do (or maybe it’s not ridiculous, I don’t know because I usually don’t tell people in the off chance it is ridiculous).

It goes like this…occasionally (9 times out of 10 mornings), I forget to brew coffee the night before and let in cool in the fridge overnight.  So in the morning I say, “crap-dangit, I forgot again.”  Then I (1) brew coffee, (2) pour the pipping hot coffee into a shallow dish and (3) put it in the freezer while I shower and do my make-up and then hooray…it’s cold enough for iced coffee.  This only works if I have at least 25 minutes to get ready. 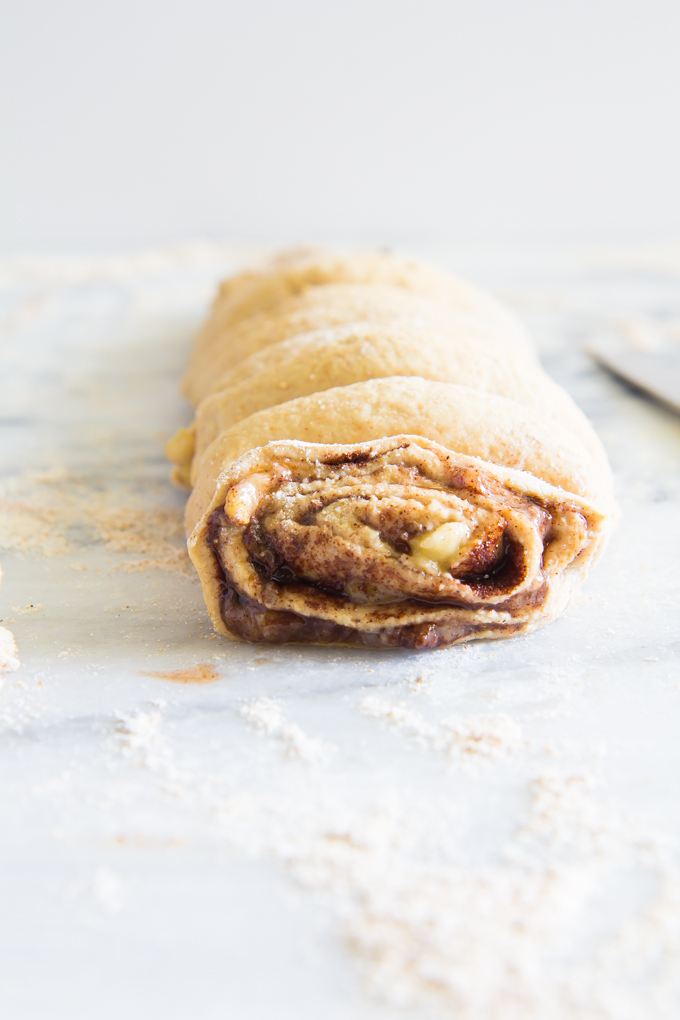 So on to the details (…i wrote ‘deets’ there, but then got annoyed with myself and erased it.)

To give these doughy spirals of love a little more oomph, I used whole wheat pastry flour instead of regular.  You could use regular, but I always feel fancy and like I know what I’m doing when I use pastry flour. 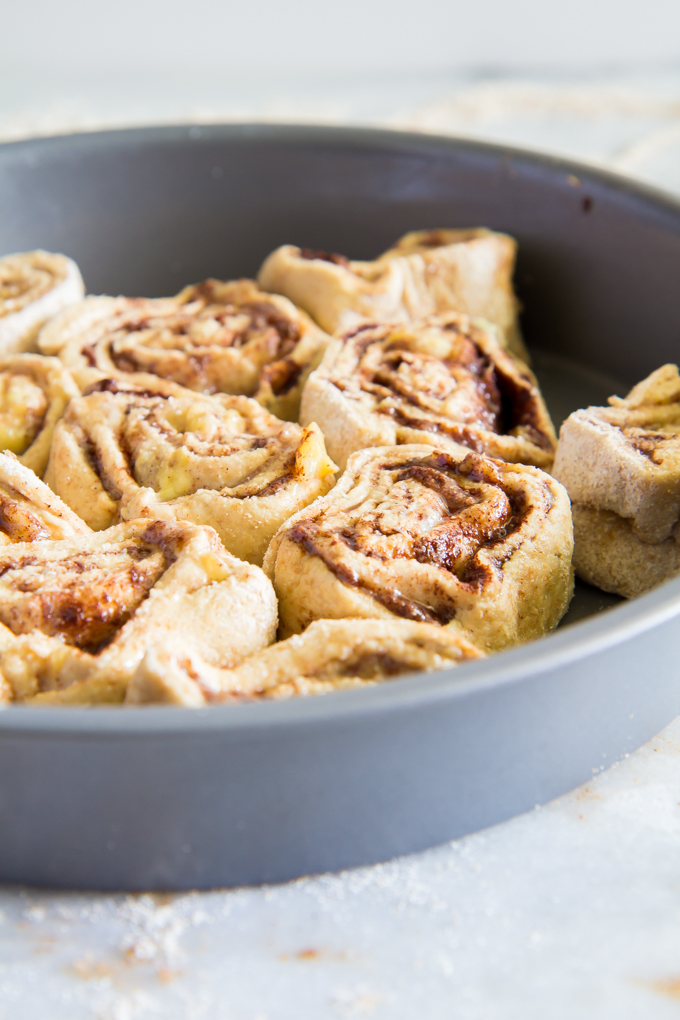 I also added quite a bit of cinnamon to the top.  As much as I love cinnamon and can never seem to buy a container large enough so that I don’t run out of it in like 3 weeks, I can’t stand cinnamon gum…so spicy.  I thought you should know. 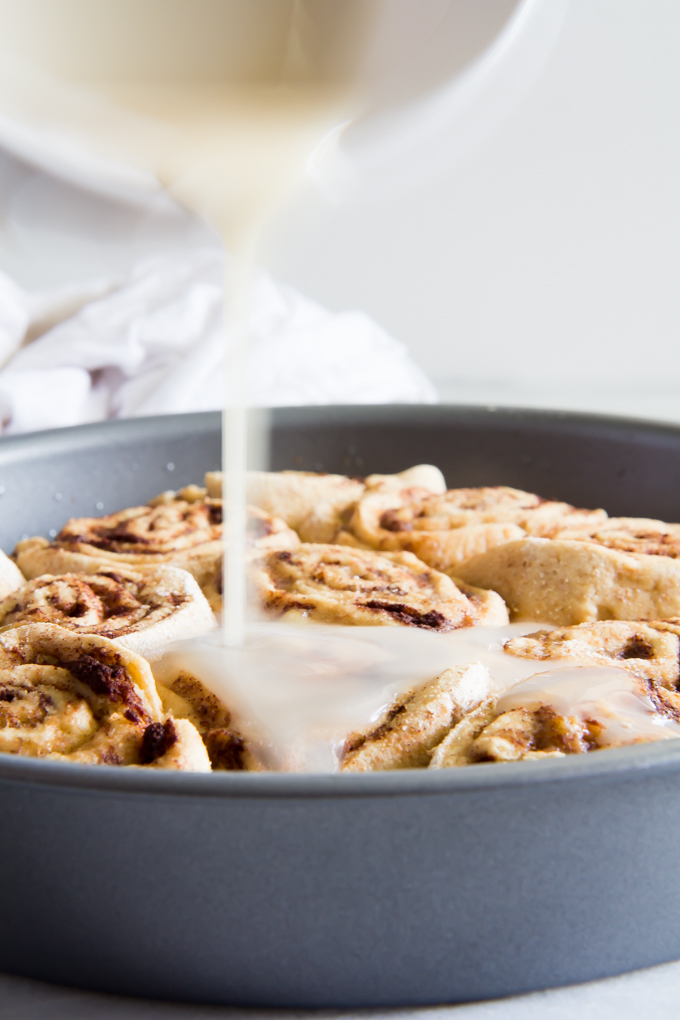 For the filling, instead of brown sugar I used bananas.  Mainly because I love bananas, I didn’t have any brown sugar and I’m hoping the people of pinterest like bananas in their cinnamon rolls. 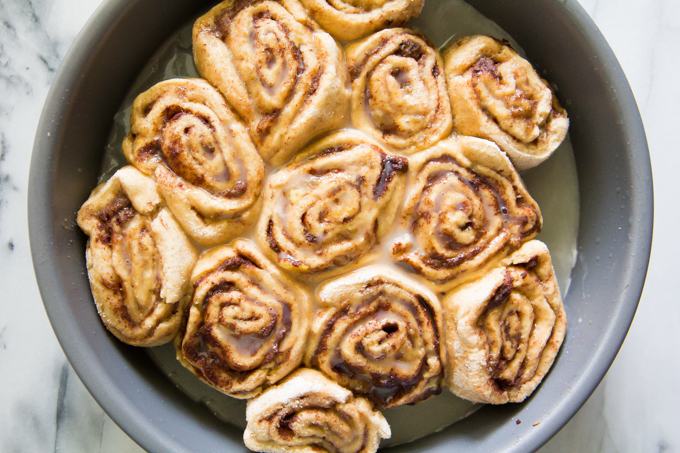 If you don’t like ooey, gooey things, this isn’t the recipe for you.  Because if you overcook these so they no longer have an ooey, gooey factor, they just don’t taste as good.  Then you’ll be sad.  And I’ll be sad because you’re sad.  And the people you serve these to will be sad.  Don’t bring that negativity to your life.

Under-bake these babies, we ain’t got no raw eggs here. 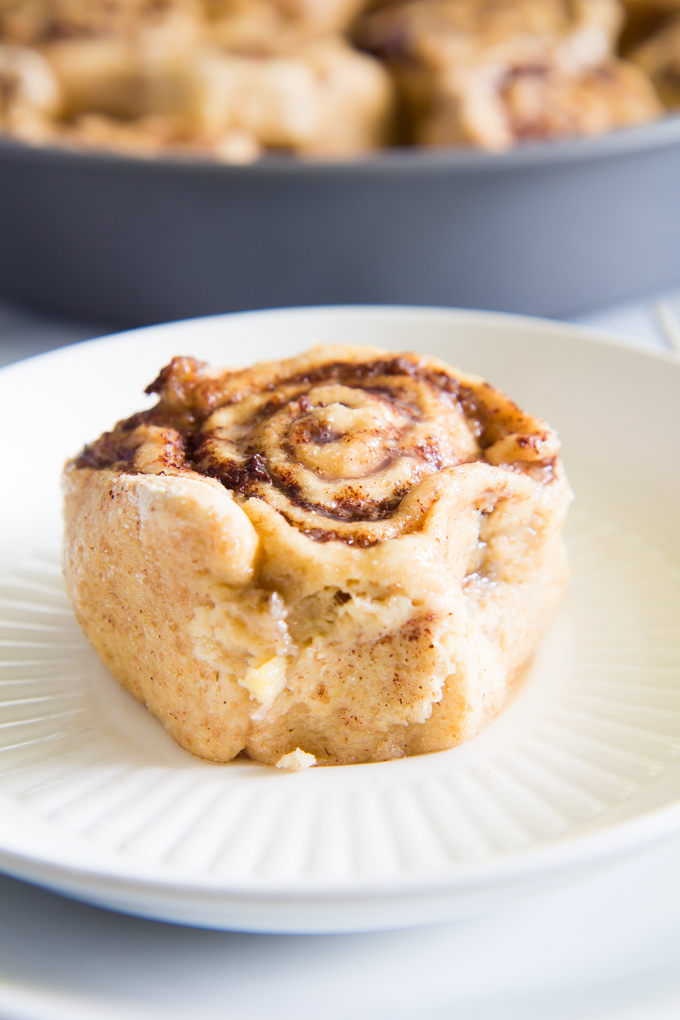 The only cinnamon roll recipe you'll ever need. Filling made with bananas instead of brown sugar.

In a bowl, combine all ingredients for dough.  Dump dough out onto a floured, flat surface.  Sprinkle the dough generously with flour and use a rolling pin to roll it out into a long rectangle (adding more flour as needed so the dough doesn't stick to your rolling pin).

In a small bowl, mix together mashed banana and coconut oil.  Spread mixture over rolled out dough and sprinkle with cinnamon (I used 3 teaspoons of cinnamon because I wanted them super cinnamon-y).  Roll up dough into cinnamon roll shape and cut into 10ish cinnamon rolls.  Place in a greased, round cake tin and bake for 10-14 minutes, or until the tops are just firm to the touch and the middle still seems gooey.

While your cinnamon rolls are baking, make your icing by combining powdered sugar, milk and vanilla in a bowl.  I made my icing VERY thin so it'd covered more surface area and sink into all the cinnamon roll layers.  If you want a thicker icing, only use 1 tablespoon milk.  Pour icing over warm cinnamon rolls and serve.

I made these Sunday and have stored them in the fridge for the last 3 days and have been eating them cold for breakfast or a snack<3. 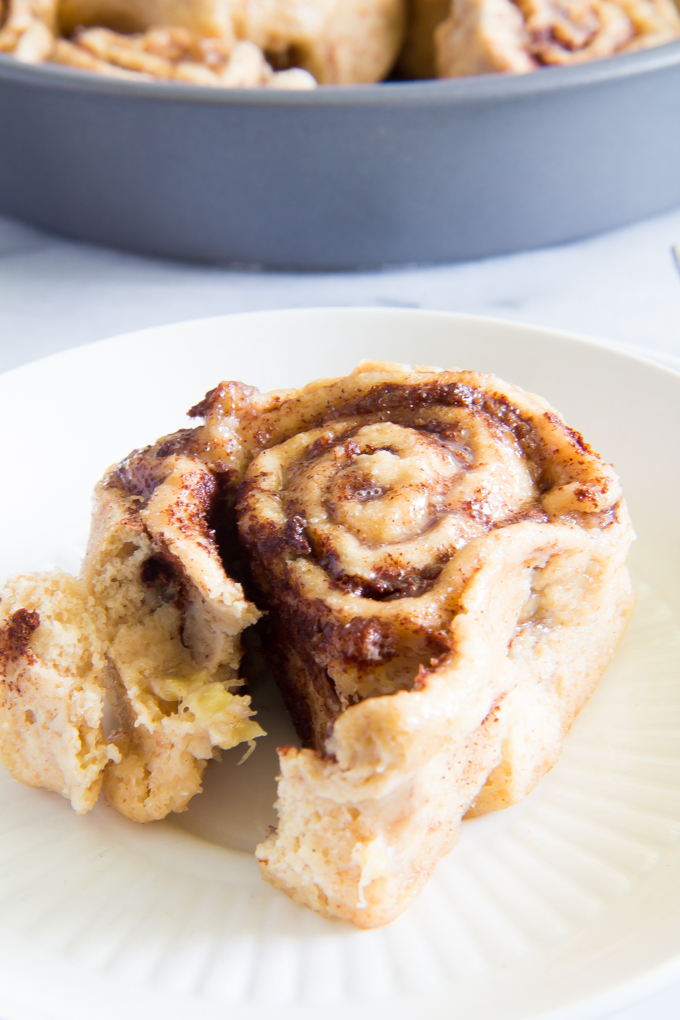 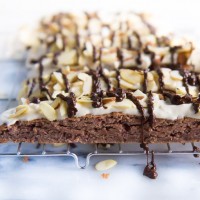 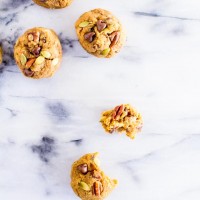 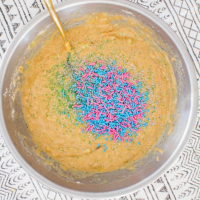 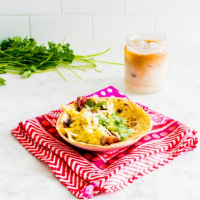